The Boston Celtics twice successfully ran the same play late in the fourth quarter against the Chicago Bulls on Monday to seal their victory. SB Nation Chicago's Ricky O'Donnell looks at how Boston beat the Bulls' vaunted pick-and-roll defense.

The Chicago Bulls may only be seven games deep into the 2012-2013 season, but there's already a composite forming, and it isn't much different from what many expected before the season started. The Bulls finished with the best record in the NBA the last two regular seasons because of three main reasons: a) Derrick Rose's incredible scoring acumen, b) a killer defense hellbent on breaking the will of opposing offenses, and c) a deep, young, athletic bench capable of upholding Tom Thibodeau's ideals while the starters caught their breath. The Bulls chose money in their pockets over retaining some integral bench components this offseason, and won't have Derrick Rose back until March (at the earliest) as the star guard recovers from a torn ACL. The defense remains in tact, though it's slightly less potent now that Omer Asik is in Houston.

So what are these new-look Bulls, exactly, now that two of their three biggest strengths have been eradicated? The numbers aren't much of a surprise. The Bulls have gotten out to a 4-3 start because they still have an elite defense, but the flaws that were suspected before the season remain very real.

A loss last Thursday to the Thunder was perhaps the ultimate reminder that NBA success often starts and ends with a superstar, and the Bulls simply don't have one as Rose recovers. Chicago has been at a loss for crunch-time scoring throughout the season, a point only hammered home when Kevin Durant went off late to seal the OKC victory last week. The Bulls just didn't have the horses to keep up, but perhaps it was encouraging they were even competent enough to make the game come down to Durant's heroics.

That's the thing: the Bulls are still going to defend, still going to rebound. Chicago is 10th in John Hollinger's offensive rebound rate so far this season and fourth in defensive rebound rate. They are still great at defending the three, as opponents are shooting only 32.8 percent against Tom Thibodeau's defense. To make up for the lack of Rose's shot creation, the Bulls have found a new way to score: by getting to the line. Chicago is the fourth best team in the NBA here, drawing over 25 foul attempts per game and converting over 78 percent of them.

Oh, and then there's this: the Bulls are hoisting 11.3 threes of their own per game so far this season, and are making only 3.6 of them. Yeah: 31.6 percent. The trade exception acquired for Kyle Korver this offseason is really struggling from downtown.

But despite the dismal shooting from deep and the lack of a go-to player in the game's deciding minutes, the Bulls have still held their own. I pointed out in my "Optimist's Take" before the season that the Bulls (if healthy) will always be competitive in large part because they're so good at defending the pick-and-roll. That's remained true, but in Monday's game vs. the Celtics, Boston twice beat Chicago's vaunted pick-and-roll defense late to win the game.

Let's take a step back real quick: how does Chicago defend basketball's most simple-yet-effective play again? Grantland's Zach Lowe credited Thibodeau with devising the NBA's newest school of thought, namely to "swarm" the ball handler with athletic big men and rely on defensive rotations to cover the ensuing holes. For examples, look no further than here and here. But with the game on the line on Monday against Boston, the Celtics and Doc Rivers one-upped Chicago: they twice converted in the half-court set using the exact same play, a double-screen for Rajon Rondo that eventually resulted in an alley-oop dunk for Kevin Garnett.

Let's take a look at how they did it. 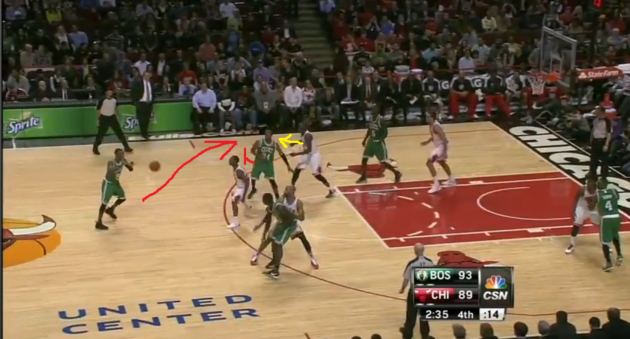 The Bulls went with a shocking but intriguing lineup to close the game on Monday, with rookie Marquis Teague logging his first real action at point guard and Jimmy Butler sliding into the two. The five-man group (along with crunch-time stalwarts Deng, Noah and Gibson) was good enough to stifle the Celtics' fourth quarter offense, though it lacked punch offensively. Still, this defense-first unit got beat late by the pick-and-roll when it counted.

What Boston is trying to do here is pretty obvious. As Rondo gets the ball at the top of the key with :10 seconds already off the shot clock, Boston has to get a move on with their possession. You can see Paul Pierce and Garnett already lining up their screens, and poor Teague ready to get engulfed by Pierce's chubby torso. 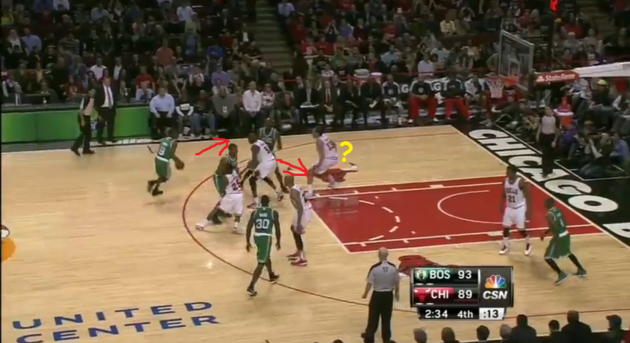 As Rondo comes off the first screen and Luol Deng goes to hedge, Garnett is there to set the second screen. Now the Celtics have numbers and the Bulls are in trouble. Joakim Noah has to guard two players at the same time. When those players are Rondo and KG, this proves to be rather difficult. 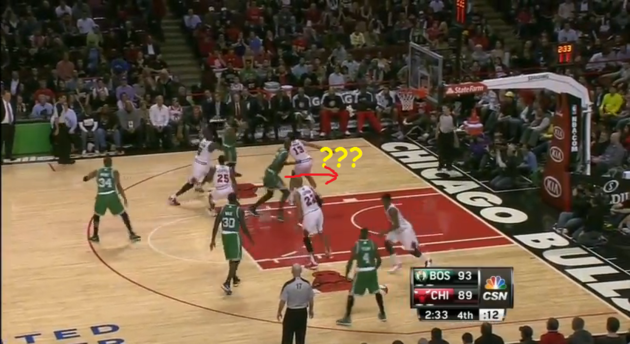 Off the second screen, Rondo has a step on Deng and Noah is essentially caught in no-man's land. Rondo is quick enough to get to the hoop if Noah retreats and he's a good enough passer to get the ball into Garnett if Noah attacks. The Bulls' pick-and-roll defense is all about attacking the ball handler, of course, but the double-screen Rivers drew up has flipped the script. Now the Celtics have the advantage, and Rondo and Garnett are more than competent enough to convert.

The other element at play here is the C's spacing: with Brandon Bass positioned beyond three-point range on the wing, Gibson is essentially taken out of the play. It's Gibson's rotation that is the one thing that could potentially stop this Boston bucket, and it's true that Bass isn't a three-point threat. The rotation is quick enough, though, and Garnett has a clear path to the hoop. 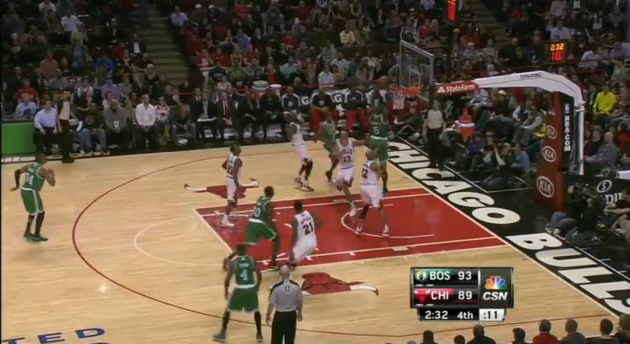 And there you go, an easy dunk. Watch the play develop here at the :43 second mark:

Perhaps it was because of that inexperienced five-man unit Chicago had on the floor, but this exact play worked twice when Boston needed it to. Here's the play-by-play results from ESPN: 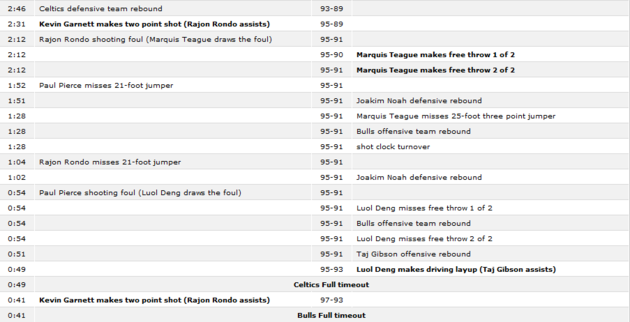 It's an interesting foray into X's and O's if only because these two teams know each other so well. Thibodeau's apprenticeship in Boston is well-documented, and he's brought many of the Celtics' principles over to Chicago. Watch the way Boston operated its offensive sets last season with Ray Allen and then look at what the Bulls tried to do with Rip Hamilton and Kyle Korver: it was essentially the same thing. The similarities are there on defense too, as each team boasts staunch pick-and-rolls defenses based around the same principles.

Ultimately, Boston dropped the Bulls to 4-3 last night because Chicago didn't have shot makers at the end of the game and couldn't stop these double-screens. Point, Rivers. Even without Rose, Bulls-Celtics still proved to be fun and you can bet Thibodeau will have something ready for his old boss next time these two teams meet.