SB Nation Chicago's Ricky O'Donnell looks back at an eventful week for the Bulls that included an injury scare for Derrick Rose, a hangover-induced 40-point victory on New Year's Day, and fútbol-like flops from Omer Asik and Kyle Korver.

1. It was was late in the fourth quarter Wednesday night in Detroit when star Chicago Bulls guard Derrick Rose fell to the floor with a thud after a seemingly harmless foul by Pistons wing Damien Wilkens on a drive to the basket. Rose laid grimacing, and grasped his left elbow in obvious pain for just long enough to give every warm-blooded Chicagoan in existence several breathless moments.

Rose, being the finely tuned machine he is, would get up and play another few possessions before the Bulls' 16-point win became official, their fifth straight victory. But even with Rose up and running around minutes later, the image of the reigning MVP wincing in agony on the ground was not about to dissipate.

Sports fans in this fair metropolis just learned first hand how devastating an injury to a superstar athlete can be, and the thought of Rose sustaining serious bodily harm would make for an unparalleled doomsday scenario. It's a fact of life Chicago is just going to have to get used to, though: when Rose is at his most determined to take the ball to the hoop, bumps and bruises are bound to occur.

Chicago sports has housed some electric athletes in recent years, but there's nothing quite like a Rose drive to the basket. Head down, zero-to-60 towards the rim, leap, contort, finish. For his first two seasons in the NBA, Rose was so good at the 'contort' part that it was hurting the team: his preternatural ability to avoid contact was costing him foul shots, which would turn into easy points for the Bulls. Rose made getting to the line one of his chief points of emphasis during his third season, and it helped him become the youngest MVP in league history.

It's true: when Rose is at the height of his powers, he's using his superior size and speed to blow by defenders, attack the rim, and get to the foul line. Notice anything about Rose's best performances this season? In Rose's 29 point effort against the Clippers on Friday and 30 point outburst against the Hawks on Tuesday, he combined to go 19-of-21 from the foul line. When he's getting to the rim and drawing contact, he's nearly unstoppable.

That contact comes with a price, though, and it amounts to moments like the one at the end of the win over the Pistons. Rose is built like a rock, but he's still the smallest (or, usually, second smallest) player on the court every night. As Jeff Foster and Indiana Pacers showed in the first round of last season's playoffs, teams will hit Rose. They will hit him hard and hit him often because it is their only defense. The Jordan Rules aren't dead, they've just been amended and approximated for these modern days.

You can bet that Wednesday won't be the last time Rose will have an injury scare. It's at the heart of a paradoxical struggle for Chicago: tell Rose to go hard and live with the fear of injury, or settle for jumpers that connect on a far less efficient rate? This is a burden the Bulls will be living with for a long time. Remember to keep breathing.

2. The Bulls' current five-game winning streak has produced a bevy of highlights, but it's hard to top the comeback win over the Atlanta Hawks on Tuesday. Chicago scored just 26 first half points and were down by as many as 19 in the third quarter before Rose sparked a furious rally with some good old fashioned Hero Ball. Rose hit three triples and got to the charity stripe at will to get the Bulls within striking distance. Once they got there, Rose scored twice on driving layups, the final one for the go-ahead bucket with nine seconds left. But after Atlanta regained the lead on the next possession, Hero Ball was shelved for something peculiar: down-and-dirty X's and O's.

That's right: with the game on the line, the Bulls actually ran a play. It would have been easy to be content with letting a piping-hot Rose create his own shot and go for the win, but coach Tom Thibodeau made a gutsy call that paid off. Rose was part of the play, but only as a decoy: he set a screen for Luol Deng which freed the small forward for a pass from center Joakim Noah that resulted in the game-winning layup.

It was a game that personified the best aspects of this Bulls team. Even when they're down, they'll keep fighting. Having a legit superstar in Rose means they're never totally out of a game, but when it comes down to it, the team is bigger than any one player. These Bulls are bigger, stronger, faster, younger, and more determined than almost any team, and Rose is just a part of that. Even in crunch time, the team-play dynamic that makes these Bulls so strong never ceases.

We can't wrap this one up without first emphasizing just how great Rose was, though. His 17-point fourth quarter scoring output was greater than the Bulls' combined totals in each of the first three quarters: Chicago scored 15 in the first, 11 in the second and 16 in the third.

Even if it might not always be necessary, Hero Ball is a hell of an option for the Bulls to keep tucked away. Just break glass in case of emergency.

3. The Bulls scored their easiest win of the young season on New Year's Day, throttling the Memphis Grizzlies by 40 points at the United Center. It was so bad that one Memphis player felt the need to let everyone know the beat-down totally was not caused by any New Year's Eve partying:

"The crazy thing about (Chicago), we didn’t even do any partying or anything the night before to celebrate the New Year," Mayo said. "We tried to keep it professional, and still came out and got beat by 40."

We'll give a likeable scholar such as O.J. Mayo the benefit of the doubt, but the quote called to mind a past example of New Year's partying gone wrong.

Before the Chicago Bears would start their march to Super Bowl XLI , starting quarterback Rex Grossman ended the 2006 regular season with a 0.0 passer rating against the Green Bay Packers during a frigid night at Solider Field. After the game, Rex said he had other things on his mind:

"In this league, especially at this position, you have to bring it every single week, no matter what," Grossman told the Chicago Sun-Times for Thursday's editions. "And the situation was I felt like I was going to play about a half, and it was the last game, it was New Year's Eve -- there were so many other factors that brought my focus away from what is actually important, and that's something that I am never going to do again.

Pro-tip: don't ever let drinking handles of rum with scarve'd bros distract you from an honest day's work. So unprofessional. 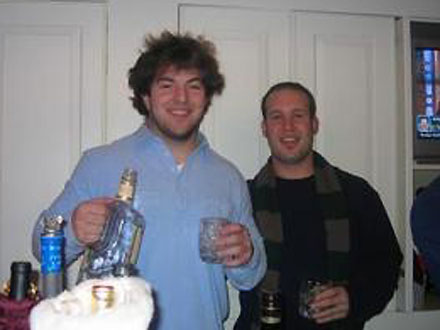 4. Before their fourth quarter rally on Tuesday, Chicago's game against Atlanta was about as hard to watch as professional basketball can get.

Everyone, together: How bad was it?

So bad that it briefly turned into soccer.

Way to defend, Kyle and Omer. Keep this up and you'll get traded to the Lakers.

5. Picture of the Week award was a no-brainer this time around: 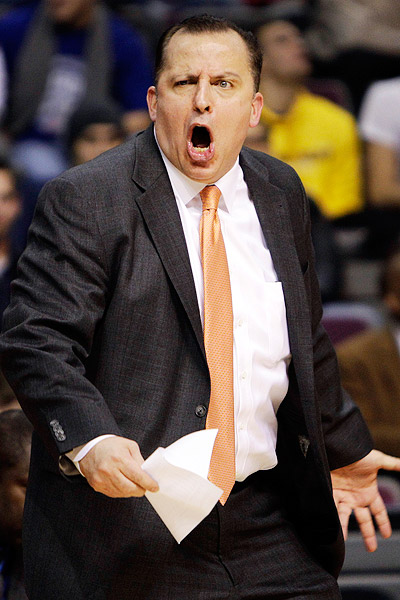 Some of Chicago's coaches are better at making funny faces than others. 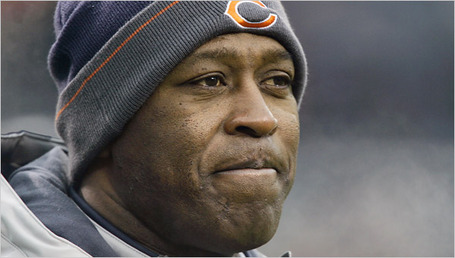 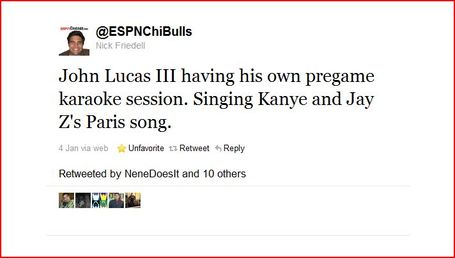 Shouts out to ESPN Chicago's Nick Friedell for ending this column *and* giving me an excuse to indulge in my love of "{Friends} In Paris" two weeks in a row. But really, you guys shouldn't be video taping me on the blue line without my consent. Not a very chill move, bros.