A Sunday matinee against the Miami Heat calls for an emergency edition of SB Nation Chicago's "Bulls Notebook".

1. In the gamut of sports-speak, "it's just another game" is a high-ranking officer, a permanent staple for any athlete or coach trying to downplay a hotly anticipated contest. Yes, Bulls-Heat, Rd. 1 counted for just a single tally mark in the season standings, just like the other 65 games. But when Heat guard Dwyane Wade said Miami and Chicago's Sunday afternoon showdown felt "like the playoffs in January", he wasn't overselling anything.

We learned during last season's Eastern Conference Finals that Bulls-Heat games are a war of attrition on a person's mental health -- a fact that seemingly goes for players and fans alike. Both teams are so talented and physical and play such suffocating half-court defense that even a regular season contest between the two leaves an individual feeling like they just sustained a series of kicks to the midsection when it's all over. The Heat's 97-93 win on Sunday only affirmed this. These games are mile markers in a long and exhausting regular season, whether they foreshadow future truths or not. But more than anything, Bulls-Heat is a capital-e Event, the type of thing you put the rest of life on hold for and build day-drinking parties around. Their first matchup of the new season did not disappoint.

As Blog-a-Bull correctly noted, so much of Sunday's game was lathered in an unsettling nostalgia. The Bulls played these Heat as tough as could be in the playoffs last year, only to see Miami's unmatched top talent prevail over a young Chicago team in close games time after time. Round 1 of 2012 essentially followed the same script.

When Miami is really pumping, their dominance feels ubiquitous and impossible to overcome. They don't just score, they score memorably. They run faster, jump higher and dunk with more malice than any basketball team I've ever seen or heard of. They reached that sixth gear at a certain point in the first quarter on Sunday, and I immediately wondered how any team could possibly compete on a level playing field with these Heat. But the Bulls hung around, as they always do, and fought and fought and fought until they had the ball on the game's final possession, down only two. Once again, Chicago was incapable of coming away with a victory. Once again, they were so damn close.

We're barely over a quarter of the way through the regular season, but a Bulls-Heat rematch in the conference finals already feels predestined. I would be shocked if it didn't happen, even with all the injuries both teams have already accumulated. Chicago and Miami are so much better than the rest of their Eastern Conference contemporaries that it might not even matter. Chicago would probably reach that point even without Luol Deng, Miami could probably get there without Dwyane Wade. But the Bulls played round one of 2K12 without Deng, their second best player, and C.J. Watson, a necessary instrument for making sure Chicago isn't killed for the few minutes Derrick Rose is off the floor. Because of that, it's difficult to glean too much from the outcome.

Miami, Chicago, and Oklahoma City are still the NBA's three best teams, and I don't think the upper tier has a hierarchy just yet. I'm not about to become resigned to Miami's crown until they finally win something. At a certain point, a coincidence becomes a trend, and three straight playoff choke-jobs from LeBron James, the league's best player, warrants a bit of skepticism.

Sunday reminded us just how intense high-stakes basketball can be. The Bulls and Heat provide nothing less. It reinforced that the playoffs will be "a goddamn bar fight", full of highs, lows, and living room screams that sound like they're coming from the depths of Hell. Last year, the Bulls won all three regular season games before Miami prevailed four games to one in the playoffs. These regular season games are only footnotes to the three act dramas of the post-season. Miami took this one memorably, but there's a whole lot left to be written. 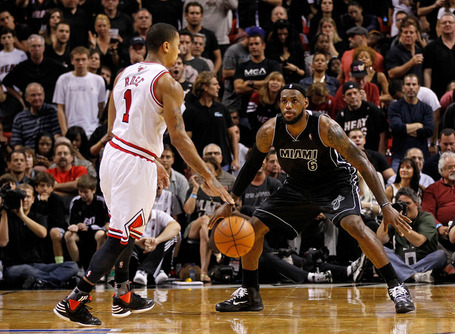 2. LeBron James and Derrick Rose are not human. Watch Sunday's game and tell me those two are the same species as you and I. It will be a tough argument to back up.

The layups and floaters Rose hit with regularity in the second half had a degree of difficulty somewhere around 12 out of 10. James may have given us one of the great highlights in NBA history in the first quarter (more on that in a second), and asserted his will throughout the contest. He hit dagger jump shots, soared for dunks, played lock down defense, and displayed the combination of skill and athleticism that may make him the most talented athlete in human existence. Each was spectacular in their first showdown of the year, though the end result was eerily similar to last season's conference finals.

Miami built sizable leads on two separate occasions in the fourth, but Rose was there to will Chicago back. The shots he hit were impossible; it doesn't feel like an overstatement to say no other player in the league could have connected on so many crucial attempts at so many different angles, each with its own shade of contact, none of it called. But when the hour hand officially reached crunch time, James switched to guard Rose and effectively ended the magic on contact.

Rose may be the only player in the NBA with athleticism comparable to James; only difference is LeBron does it in a frame that is six inches taller and 70 lbs. heavier. When he switches onto Rose, Rose is hesitant to even attack, even after so many body-contorting finishes around the rim in the same quarter. It's times like these that make you wonder if James is even more impressive as a perimeter defender than he is as an offensive weapon. His defense, when he really puts his mind to it, is downright oppressive. That he shackled Rose as much as he did in the final four minutes and Rose still found himself at the line down one with :22 seconds to play is a testament to everyone else. If these games solely come down to Rose vs. James, it's hard to like the Bulls' chances.

Rose missed his two free throws, and is likely spending this very moment giving himself lashes. But I want to focus more on the Bulls' next possession and the shot Rose missed with four seconds left that would have tied the game. It was so damn similar to last season's conference finals, you might have screamed an expletive at Keith Bogans just out of habit.

Rose's final shot was not a great look, but it was one he could have made, and therefore probably one he had to take. The hope is that the addition of Richard Hamilton will alleviate the isolation pressure Rose felt so often against Miami in the playoffs, and let the record show Rip might have had a good look in the corner if someone could have gotten him the ball. It didn't happen, and Sunday's game ended like so many last May: Rose, on a wing and a prayer, hoisting up a shot in a critical moment that feels doomed from the second it leaves his hand.

Logic says Sunday won't be the last time the Bulls and Rose find themselves in that same position. If it's always iso, and the defender is always LeBron, Chicago will be in some trouble. This is why these regular season games against Miami are important: they teach lessons multiplied by five. When we see this scenario again -- and we will -- hopefully the Bulls will be able to have grasped onto something from previous failures.

3. "I can't stop watching this LeBron dunk. Will be interesting to see if, over time, it cracks the short list of iconic NBA dunks along with Chambers over KJ, Jordan over Ewing, Doc over Cooper, Kemp over Gatling, etc." -- ESPN's Bill Simmons.

Simmons has long said that James may give us basketball's all-time greatest highlight before his career is over, and, you know, this may just be it. I could probably write a 2,000 word essay on this play alone -- do not tempt me -- but it would have nothing on the guttural cries emitted from the crowd in my living room when this happened. LeBron James jumped over John Lucas III to dunk a basketball. This is the NBA in 2012. Kill or be killed. 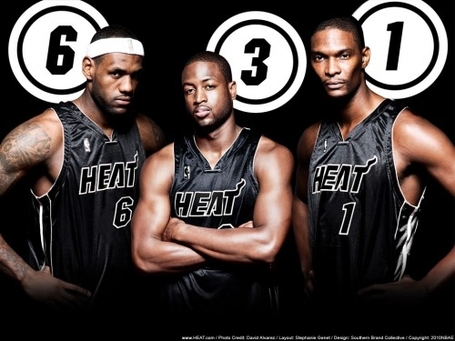 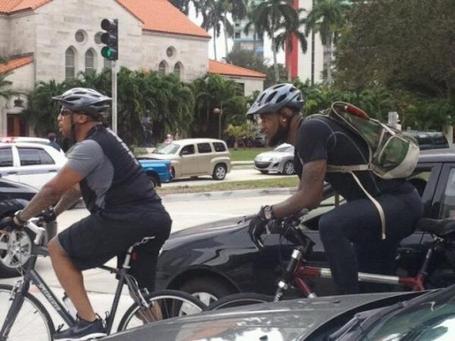