SB Nation Chicago's Ricky O'Donnell looks back at an eventful week for the Bulls that included injuries to Luol Deng and Taj Gibson, a home loss to the Pacers, and a chorus of boos for Nets forward Kris Humphries.

Share All sharing options for: Chicago Bulls Notebook: Injuries Pile Up, The Pacers Are Legit, And Hating Kris Humphries

1. If it's true that nothing great can be accomplished without first encountering an unsought assemblage of adversity, then at least the Chicago Bulls can place a checkmark next to the preliminary requirement on the twisted road to an NBA championship. It's hard to imagine a team as good as these Bulls will face many weeks as trying as this one. It started with Derrick Rose -- reigning MVP, The Franchise, ect. -- momentarily dropping the athlete-speak to indulge the press that it's likely he won't be 100 percent the rest of the season thanks to a nasty bout with turf toe. As if that wasn't cruel enough, news of injuries to Taj Gibson (ankle) and Luol Deng (wrist) would soon follow.

Bulls color commentator Stacey King, always one to have his hashtag game locked tight, deemed this season the Bulls' "AK Tour" for their expected run of dominance. After this week, the "ER Tour" might be more appropriate.

Chicago played without all three on Saturday versus the Bobcats, and proved that even without its two best players and most valuable bench contributor, it can still beat the dregs of the league. Perhaps it's more an indictment on what's happening in Charlotte, as even a hoops junkie like myself would have a hard time determining if Cory Higgins is a pro basketball player or the government name of a charter member of the Brick Squad. Regardless, Carlos Boozer and friends carried a shorthanded Chicago team to a victory that was ugly but heartening. One of the most admirable traits of Tom Thibodeau's Bulls has been their ability to grind victories out of performances that are less than aesthetically pleasing, and the bumps and bruises to all these key cogs will only test that trait more than ever.

It's a shame, because the first 25 percent of the season has proved conclusively that our Bulls are a very real title contender, and member of the NBA's upper echelon. That they've affirmed as much without a full team firing on all cylinders yet is even more impressive.

The simple fact of the matter is, even at 16-4, we have no idea how good these Bulls really are. They simply haven't played together enough. Newly minted weapon Richard Hamilton was out, then C.J. Watson went down. By the time they returned to the lineup, there went Rose, Gibson, and Deng. So while this latest amalgamation of injuries is certifiably unsettling, perhaps there's comfort to be taken in the unknown. We know these Bulls are ferocious competitors who will be bigger, faster, and younger than nearly every team they play. We know their ceiling is high. Exactly how high has yet to be determined.

It's hard to find warmth in the unrevealed. Yes, it's certainly possible that Rose's toe could hinder him. Deng's wrist injury sounds even more severe, and the current plan to "gut it out" is commendable but not exactly reassuring. Yet if Chicago actually can find a way to get healthy just before playoff time, imagine the possibilities. This team is great already, and we've yet to see them play without a handicap.

2. "I'll never forget how they celebrated just from winning this game," Rose told reporters. "I can't wait to play them again."

The quote above sounds like it could be pulled straight from the "Kobe System", if not one of young MJ's litany of pseudo-motivational Nike commercials around the turn of the '90s. But no, this vengeful voice belongs to Derrick Rose, a superstar as distinct for his introverted personality as his world-class athleticism.

The Pacers handed Chicago its first home loss of the season on Wednesday when they left the United Center with a 95-90 victory. If it was the Bulls' nature, they wouldn't have to look hard for excuses. They're all spelled out in the section above. But for a team as decidedly "rising" as Indiana, a road win over even a banged-up Bulls squad is still very much a reason for celebration. It's hard to fault them for savoring the opportunity.

Still, that quote. It speaks to Rose's competitiveness, and how he treats every loss like a personal violation of his being. It also lends some very legitimate credibility to these Pacers.

Indiana is a likable squad. They're devoid of superstar egos, have a good coach, play hard, and boast a well-rounded roster. They have guards, they have wings, they have big men. What they don't have a clear cut alpha dog, and in the NBA, that's the difference between the haves and have nots. Still, Rose wouldn't sound so agitated if the Pacers' victory was some one-off fluke. Indiana gave the Bulls a hell of a five-game series in the fist round last season, and look to be improved across the board in 2012.

The Pacers are a threat; in fact, they might be the third best team in the conference. That's not to say Chicago or Miami will lose any sleep over an early round playoff pairing with Indiana, but the East's star-laden second tier (think Celtics, Magic, Hawks, and, if they can get it together, the Knicks) should be on high alert. It's been spelled out other places, but this particular Pacers team really does remind of the Scott Skiles-led Bulls. Their sum is greater than the worth of their parts, they aren't resigned to one player in crunch-time, and, for as likable as they may be, their ceiling seems limited. It's a great little basketball team, one just teeming to knock someone's teeth out and flip the basketball world on its head. It just seems impossible they can go all the way.

It's a star's league, and teams like the Pacers remind you of that at every turn. Thank heavens for that 1.7 percent chance. Without it, the Bulls might look a lot like these Pacers.

3. If you're to believe the organization's marquee advertising campaign, Chicago's loss to the Miami Heat in the Eastern Conference Finals a season ago will be at the forefront of the team's collective mind throughout the entire season. After all, these Bulls just want to "we-in", and LeBron, Wade, and the rest of the Death Star stopped them short of their goal last May. On Sunday, the Bulls get their first chance to extract a measured amount of revenge with an afternoon tip scheduled in south Florida against the Heat.

Chicago badly wants to win this game; a fact that shouldn't need to be spelled out for you. But the Bulls' obsession with the Heat may have started to turn to psychosis this week when it was reported that Luol Deng, he of the freshly torn wrist ligaments, is going to try his damnedest to go on Sunday versus Miami. If Woj says it, it must be true.

Given the way Chicago is wired as a sports city, this story is sure to delight the masses. It has everything we hold dear: triumph over adversity, triumph over evil, triumph for the blue-collared Second City. Deng's intentions are certainly commendable, and I don't doubt his desire to play one bit. Still, this is why franchise's are bigger than players and coaches. For the best of the team, someone needs to tell Lu to sit this one out.

Forget the absurdity of rushing back from an injury this severe for a regular season game; just think about all the added damage Deng could potentially do to that wrist when tasked with guarding the world's most domineering athletic force, LeBron James. And remember: just last week, we had members of the New York Giants freely admit they knew the concussion history of San Francisco's Kyle Williams and hit him with added oomph because of it. We don't know if Miami is that malignant, but why test them?

The Bulls beat the Heat in all three of their regular season games last season. They also had home court for the playoffs. When it came time to dance with the devil, the Bulls were a tired, broken team and Miami took it to them in five games. There's a lesson buried in there for this season. Here's hoping Chicago can find it.

4.Two of my bros were at the United Center on Monday for the Bulls' matchup with the New Jersey Nets when they bumped into a female acquaintance and her boyfriend in the 300 level. This is how she greeted them:

"Are you guys here for Kris Humphries? Because weeeeeee are!" 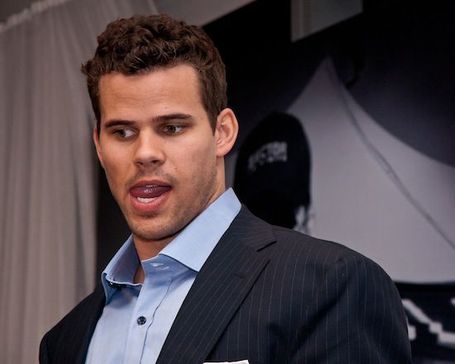 If you think the sentiment is uncommon, you haven't paid much attention to the NBA this season. A short-lived marriage to Kim Kardashian and the reality TV time that followed helped turn Humphries, a decidedly vapid power forward during his eight years as a pro hooper, into one of the league's biggest names, if not its biggest villain. Not even LeBron James hears boos just after catching the ball, but Humphries, in all his dunderheaded glory, can't seem to enter the action any other way.

Do women really hold dear the sanctity of Kim Kardashian? Is the appeal of her reality show really broad enough to reach NBA fans in arenas across the country? What could Humphries possibly have done on that show to turn into the league's biggest bad guy?

For these answers and more, I reached out to some cool girls I know and asked them to shed some light. My homegirl Liz said (all responses sic'd):

I don't hate Humphries - its a little ridiculous to declare hatred on a Minnesota native gone professional Kardashian romancer - pretty savvy if I do say so (he's on E! for heaven's sake!). But I did boo him - and its not because I love Kim Kardashian, its because the guy is a total whackjob, screaming "foul!" every time a Bulls player made contact, or "come on, ref- fucking come on" at least once every five minutes. The guy isn't a ball player- he's an actor, an attention-getter for all the wrong reasons.

Oh, and also - his warmup pants were too short.

Aside from being an all around wang, i think 99% of people out there really do despise the kardashians- but they despise from the comfort of their home while watching/gossiping about the latest 'kourtney and kim take new york' . Associating himself with a brand/family that is phony to begin with, and clearly doing it just to latch on to their phony phame (wordplay!) really sealed the deal that joel mchale & the rest of america would mercilessly rip on him until he steps out of the public eye.

But why, I asked Kelly, did Lamar Odom not suffer the same fate?

1) he's a good basketball player 2) he was famous enough without the kardashian name, if anything Khloe was trying to hop on his fame bandwagon 3) he's not an overall wang.

When I asked my other friend Kelly S., she responded that she actually liked Humphries. These were her reasons.

He is dumb and really has no real filter when he talks. Plus he isn't that good at basketball and looks like a Berenstein bear. 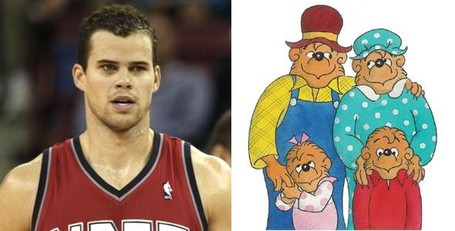 5. For as grating as I find the excessive cheers for Brian Scalabrine, he was having a good week before missing a potential game-winning three-pointer on the Bulls' final possession against Indiana on Wednesday. First, he starred in this great profile by ESPN Chicago's Nick Friedell. Then, he got his own one-game YouTube mixtape, complete with cool music and fonts.