SB Nation Chicago's Ricky O'Donnell looks back at an eventful week for the Bulls that included continued struggles for Carlos Boozer and Joakim Noah, "The John Lucas III Game", and a matchup against the people's champ, Ricky Rubio.

1. If you've been living life inside the vortex of the Chicago Bulls' 24/7 news cycle, it certainly doesn't seem like the surrounding noise should be pertaining to the NBA's best team. But that's exactly what the Bulls are as they head into their Friday night matchup against the conference's old guard, the Boston Celtics, with a 10-2 record. These Bulls have manufactured two chief storylines thus far, and neither of them are particularly positive. There's the injuries to guards Richard Hamilton and C.J. Watson, nagging a little more with each passing day, which have prevented Chicago from taking a true gauge of its full team. And then there's the more disconcerting item: the struggles of highly paid big men Carlos Boozer and Joakim Noah, who start the games but cannot finish them.

The Bulls are far from the only title contender with question marks as the league enters the thick of the most hyper-condensed month on the schedule. LeBron James choked away consecutive games for Miami this week, the Clippers are still led into battled by the suave-looking but eternally overmatched Vinny Del Negro, and the Lakers play five American-born white guys. Everyone has a problem. Perhaps it's unreasonable to expect any team to find its footing so early in this abridged season without the aid of a true training camp or preseason. It's great to have the NBA back, but much of the play has been sloppy, even by the league's own half-assed early season standards. But while it's not quite time to run with jokes about trading for a second amnesty clause, the seeming regression of Noah and apparent truth that Boozer is no second banana, at least not on a team with goals this lofty, is a real cause for concern.

I ask you this, Bulls fan: can Chicago defeat Miami and its vaunted Big Three with a crunch-time lineup that includes Taj Gibson and Omer Asik? Each is immensely popular in this city for all the right reasons -- homegrown try-harders who bring a lot to the table defensively -- but their reputations in Chicago, at least at this point, proceed their reputations league-wide. Gibson and Asik are nice players, but they not championship staples. They are reserves; role players who should be counted on to change the flow of a game, not recreate and sustain it. That should be the job of Boozer -- the low-post scorer -- and Noah -- the maniacal, high-energy defender and rebounder with more offensive skill than one would expect.

Make no mistake, Boozer and Noah do not deserve to be finishing games, at least not yet. Boozer is uneven offensively -- solid outings followed by no shows, no matter the level of competition -- and remains putrid on defense. A look at Noah's game logs over the last five games is even more pathetic: he's scored a total of 21 points, and is averaging 7.4 rebounds a night. In their place, all Gibson and Asik have done is help the Bulls secure a victory nearly every night. There's certainly something to be said for not fixing what isn't broke, but for a team that aspires to climb as high as these Bulls, finding out what Boozer and Noah really have in them should soon become a top priority.

Of course, it all comes back to Miami. Not even 20 percent of the way through the season, a Bulls-Heat Eastern Conference Finals rematch looks unavoidable. Thanks for playing, other teams, enjoy your gift bags. But while it's easy to question whether the Bulls can shoot down Miami without either of their starting big men playing the game's most crucial minutes, perhaps the answer lies more with LeBron and crew. The Heat emit enough blinding power to sustain a small village, but regularly wilt in the clutch. Chicago will play premium defense while being as big, strong, fast, and young as any team the Heat will face.

Every team has a flaw. For the Bulls, they better work to address it now before it becomes a real issue down the line.

2. For as long as these 2011-2012 Chicago Bulls are remembered, Wednesday's 78-64 victory over the Washington Wizards will be known as The John Lucas III Game. It was an event.

Lucas III, the team's never-used third-string point guard, was rushed into action when Derrick Rose 'reactivated' a toe injury against the Minnesota Timberwolves the night before. So in stepped the 5'11 Lucas III -- he of the size 32-30 jeans -- for his first ever NBA start at tender age of 29.

He was anything but scared. Lucas III shot the ball, shot the ball, and shot the ball again. The Bulls are traditionally helmed with a shoot-first point guard, but Lucas III took the sentiment to another level. Rose hasn't attempted more than 22 shots in a game the entire season. In his one shining moment, Lucas III took 28. But while the pint-sized guard was anything but efficient, he did end with a damn near mind-blowing stat line: 25 points, eight rebounds, and eight assists. That's right, John Lucas III was two rebounds and two assists away from a triple-double. This is real life.

Lucas III played 45 of the game's 48 minutes. Even a day later, he was understandably tired.

It's a reasonable bet that Lucas III won't take 28 more shots the rest of the year; hell, probably the rest of his NBA career. But for one night, he ran one of the NBA's best teams, and he ran them reasonably well. That game was a blast, though I never want to see it again.

3. I claimed Ricky Rubio as one of my favorite players when he entered the 2009 NBA Draft, so Tuesday night's Bulls-Timberwolves game was a big one for me. It was the teams' only matchup of the season, which meant it was likely the only time I'd get to watch Rubio play for a full game as a rookie.

It's hard not to cheer for Rubio, even if you don't share his name and haircut (guilty). The NBA has a fine burgeoning generation of young point guards, but none plays quite like Rubio. His passing sense is remarkable; his flair for style nearly unparallelled. He's fun to watch play because he'd be fun to play with. As TBJ's Trey Kerby tweeted, "Literally any human can just stand in the corner and Ricky Rubio will get them an open three." He is parts of Steve Nash, Rajon Rondo, and 'White Chocloate' Williams all rolled into one.

Rubio is a flawed player, but he's an exciting one. He already appears better than most expected, giving the Class of '09 a legitimate shot at producing three Rookie of the Year winners. Against the Bulls on Tuesday, Rubio proved why he's the talk of league.

Rubio finished with 13 points and 12 assists, and helped the T-Wolves erase a 24-point second quarter Bulls lead. Chicago would prevail in the end behind a mammoth game from Derrick Rose, but Rubio may have been the star of the night. He produced numerous YouTube-worthy plays ("Ricky YouTubio"?), including this one-handed alley-oop toss to Anthony Randolph.

Minnesota will be a trendy team among the NBA's online tastemakers all season long, and Rubio is the main reason. Way out in the NBA's version of Siberia, a star is forming.

4. Chicago's love of the Bulls' 12th man, Brian Scalabrine, is either fun or embarrassing, you decide. On Monday in a lopsided win over the Detroit Pistons, Scalabrine got some burn and received the type of thunderous ovation usually only reserved for rock stars.

Scalabrine is a human victory cigar, and one everybody -- coaches, teammates, fans -- seems to adore. Maybe it's because he's more, um, relatable than some of the players. I find the too-rowdy cheers a bit irritating, but maybe it's all harmless, well-meaning fun. Who cares, I guess. I just hope I'm never in the stadium when Scalabrine hits a shot to give the Bulls 100 points and the fans free Big Macs. Human ear drums are not built to handle that type of explosion.

5. When asked who would back-up Lucas III at point guard before Wednesday's game against Washington, coach Tom Thibodeau said "Lucas". With Rose and C.J. Watson both hurting, Lucas was literally the only point guard Thibodeau had available. But as soon as it looked like Rose would be out, the Bulls signed veteran point guard Mike James to a non-guaranteed contract.

James had a busy day. From the Trib:

Traveling man: Mike James' day started in Erie, Pa., continued with an afternoon flight to Chicago and ended with him playing 40.2 seconds in the Bulls victory after soaking up a crash course from assistant coaches on the bench.

Those 40.2 seconds were played without a name on the back of his jersey. 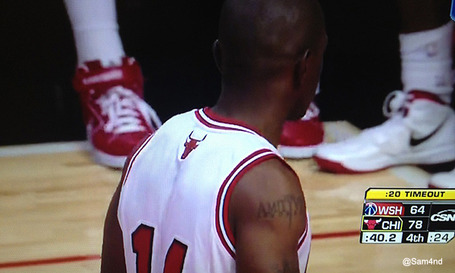 6.These are the first 110 words (sans a tangent on Noah) of a Tuesday column by the Tribune's Steve Rosenbloom entitled:

Do the Bulls want someone as stupid as Howard?

I have an issue with Dwight Howard.

Great player, no doubt. He went for 28 and 15 against the floss formerly known as Joakim Noah last week.

But do you want the Howard who’s apparently too stupid to want to come to the Bulls?

If Howard doesn’t want to come to Chicago, do you really want him? Do you want someone that stupid?

Point is, Howard says he wants to play in a bigger market, not on a better team. Like he’s too stupid to know the difference.

As much as I enjoy a good one-sentence-per-paragraph screed -- OK, I don't -- Rosenbloom is out of line. Howard gets called 'stupid' three times, an 'idiot' twice, and a 'loser' once. Considering this is all coming from a stupid, idiot loser like Steve Rosenbloom, it isn't very surprising.

It is kind of sad, though, enough to get me to wag my Internet finger at the Trib for running such a piece of garbage. This is not enlightening or entertaining or educational in any way. It's almost hate-mongering. I honestly can't remember anything like it, an old white guy attacking a young, rich, black kid who is literally better than him at every single aspect of life. No, I've never read a sports column by Dwight Howard, but certainly it can't be as *stupid* as this one.

7. This week's Picture of the Week isn't limited to just one. 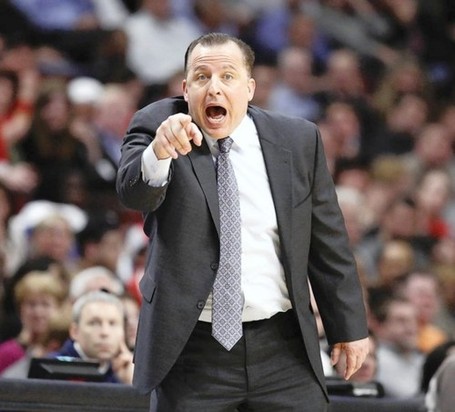 Blog-A-Bull directed us to the Faces Of Thibs Tumblr, which is really just fantastic and definitely worth your time.

8. Finally: I taped a 40-minute podcast with fellow SB Nation Chicago scribes Bobby Loesch and Z.W. Martin last night. We talked about the Bears in the first half and the Bulls in the second half. Check it out, if you're so inclined.