On 'Watch The Throne' Day, We Have Bulls Intros, Swagger, Boozer, J.R. Smith and More

Share All sharing options for: On 'Watch The Throne' Day, We Have Bulls Intros, Swagger, Boozer, J.R. Smith and More

If you're one of those people who enjoys quotes like "there's a reason you can't spell 'rap' without 'crap,'*" then it's very possible you are unaware today is officially Watch The Throne Day.

It's a day to celebrate hip-hop and swagger, and with that in mind, I'll be giving you five links (after the jump) to help promote the cause.

So throw on some "Otis" and join me, won't you?

We'll start from most relevant to least relevant.

1. Carlos Boozer, the floor is yours. 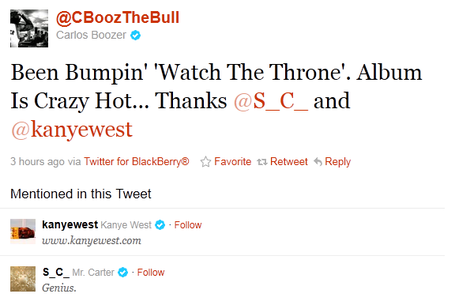 It kinda kills me Booz has heard this before record I have.

2. Trey Kerby at The Basketball Jones did a phenomenal post about former Chicago Bulls reserve Cliff Levingston and his pre-game spin high-fives. It's a lot better than it sounds. Kerbs sez:

You can see it here, on the left of the high five lines, but you have to pay close attention. Every time one of the Bulls’ starters runs out, reserve big man Cliff Levingston does a super smooth Michael Jackson-styled full spin that’s perfectly timed to end with a high five to his teammate. It’s kind of hard to see at first — check out the 1:00 mark to get a great example — but once you catch it, it’ll change your life.

3. Another Basketball Jones link: "J.R. Smith swats kid in charity game" should speak for itself, but the clip is even better than you'd think.

I mean, he really kills that kid. The booing afterward kinda seals it.

4. I discussed the significance of "August 8th" earlier today.

5. And to end the day with some super swag, we've got Brandon Jennings throwing the ball off a guy's face en route to a lay up.

Bobby Loesch is the associate editor of the Chicago sports blog Tremendous Upside Potential and a daily contributor to SB Nation Chicago. Follow him on Twitter @bobbystompy.