LeBron James has been pretty stellar in this year's NBA playoffs. Though somewhat maligned throughout, James and the Miami Heat are up 2-1 on the Dallas Mavericks and just need to hold serve the rest of the way to secure an NBA championship.

Naturally, as another season is about to conclude and we re-write the history books like we do every year, the big L-word comes into play. I'm gonna do the Scoop Jackson one-line thing on you guys now. You ready?

In my opinion, James still isn't in the same stratosphere as Michael Jordan, but MJ's name is popping up more and more for some odd reason. While James is still pretty far off from most of Jordan's personal and team accomplishments, one could certainly make the case that he's got more natural talent than Jordan ever did. Scottie Pippen tried to do just that. People got mad.

A Facebook sponsored poll for the movie "Bad Teacher" tried to settle things once and for all. And the results are below... 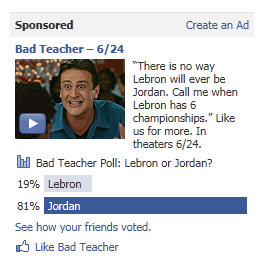 So, according to an informal poll of the people who decided to vote on Facebook, Jordan still is about 62 percent better than LBJ.

Anything you'd like to add, Jason Segel's character from the "Bad Teacher" trailer?

People do love that rings argument.