The Heat may have slayed our beloved Bulls, but Derrick Rose and Tom Thibodeau found a bit of vindication last night as Dallas eliminated Miami and claimed the NBA title.

At the precipice of these Finals, just days after the Heat had eliminated our valiant Bulls, I asked Chicagoans who they were pulling for in the final chapter of one of the most fun NBA seasons in recent memory. The answer would appear to be obvious, written to stark, bold print, if not comic sans. The Heat had been painted with a villainous brush since their inception,  and the still-too-fresh wounds they inflicted on the Bulls would seemingly make the Mavericks Chicago's adopted heroes.

I argued that while the Heat can suck it, always and forever, it was perhaps in the Bulls' best interest if Miami would win the title and then, you know, 'chill'. My argument must not have been that good: 59 percent of you answered that you were rooting for Dallas, though I did originally anticipate that number to be hovering around 80 or 90 percent.

Let's make one thing clear, though. As Jason Terry continued to hit dagger after dagger and Dirk finally found his footing in Game 6's fourth quarter, every bone in my body was shaking with schadenfreude. 'One title indifference' was probably wishful thinking in the first place. To see LeBron, Bosh, and Riles sink after so much post-Decision preening felt like reaching into a pair of old jeans and finding $20. I would go as far to say that a decent percentage of my Bulls pain imposed by Miami was eradicated with Dallas' decisive win last night.

Indeed, the world is better place today than it was yesterday, and don't let LeBron's despicable "your life still sucks, haters" post-game propaganda ruin anything. But while "Heat Lose" is clearly getting bigger play than "Mavs Win", I think it's time SB Nation Chicago flexes our liberated fandom muscles once again to give credit where credit is do. These Finals may have started out with the world (ie: Chicago) culling their Heat hate, but somewhere along the way I'd like to think it transformed into a bit of legitimate Mavericks fandom. What a team, what a series, what a superstar. The Mavs are cool. Here are a few reasons why:

1. Dirk is the People's Champ.

How quick we were to anoint Kevin Durant and Derrick Rose the new national sports unicorn. We forgot one thing: America loves few things more than a redemption story, especially when it's coming from a  white guy superstar who appears as grounded as Dirk Nowitzki. Maybe Anyone vs Miami would have been a matchup seeping with a Good vs. Evil narrative, but Dirk's incredible postseason run and seemingly earnest demeanor made him feel like a true American hero, heritage be damned. I liked how Jay Caspian King framed this series (half jokingly) at the mega hub for Great Writing last week:

After this year of scolding and moral posturing, we have arrived at a final scene: Dirk Nowitzki — a simple man from vague origins — walks alone into battle against three mercenaries whose heedless and reckless pursuit of personal gain has unhinged the American Way. Everyone our hero has trusted and loved has either betrayed him (Jason Terry) or has died (Jason Kidd, Peja Stojakovic). And although the journey has long since lost its direction, the people's hero pushes on, not because there is value in pushing on for pushing on's sake, but because the audience demands its fill of blood and vengeance.

Drop the question mark, son. Jason Terry is way cool. One of the most enduring storylines of these playoffs involved Terry's Larry O'Brien trophy bicep tattoo, the one he planned on removing if Dallas were to fail the United States in the season's final series. Thankfully for Terry (and the country!) the Mavs pulled through, as my bro Pharrell once told me about how painful it is to have ink removed. Forget about the tat, though. One thing I'll always remember about these Finals was how enjoyable it was to hear Jason Terry talk. It felt like he was auditioning for a TNT spot the entire postseason, and I mean that in the least condescending way possible. Terry was genuine and engaging as the Mavs' mouthpiece, and the Finals were better for it.

He also has a dope signature taunt. (click to start)

Barea turned into Must See TV during these playoffs, turning even the most routine jumpers or drives to the lane into something spectacular due to his impossibly tiny frame. The fact that he's dating a former Ms. Universe winner only adds to his legend. This Getty Images account doesn't include any shots of Zuleyka Rivera, but please, let a quick Google image search be your friend.

5. Brian Cardinal is Your Dad.

6. Redemption for the Baby Bulls!

The (theoretical) ghosts of Tim Floyd and Jerry Krause are finally vindicated. 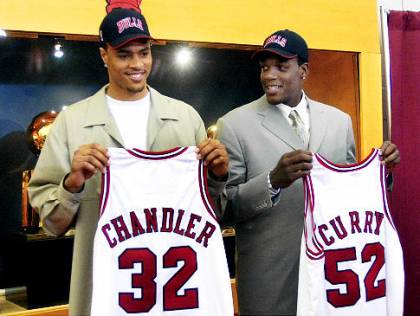 It's been real, 2010-2011 NBA season. I enjoyed you thoroughly from start to finish. Now please, don't hibernate longer than usual. A baseball-only world is a world not worth living in.