As I touched on earlier in the week, it's almost impossible to wrap your head around all of the subplots in the Eastern Conference Finals. LeBron gets most of the attention because, well, he's LeBron, and Chicago was once the favorites to win whatever you want to call his grandiose free agency last summer. Between the local ties to D. Wade, Derrick Rose calling his shot and stealing the MVP away from James, and the non-prophetic words of World Wide Wes, these conference finals have added a few pounds thanks to so much juicy context.

One side-angle that has slipped through the cracks involves the 2008 Draft lottery. The 1.7% chance the Bulls cashed in to get Rose is something I'm always cognizant of, however it's easy to forget that these Heat actually had the NBA's worst record that season. That's right: D. Rose was close to taking his talents to South Beach. While the thought alone is scary enough, ESPN Chicago decided to take it one step further with a vomit-inducing Photoshop to lead its website today. SHIELD YOUR EYES, after the jump.... 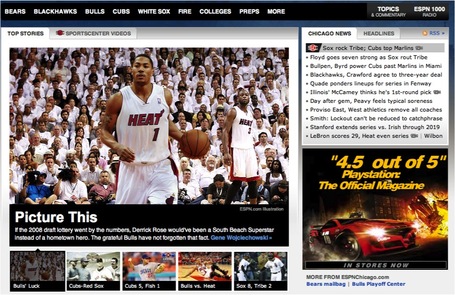 If by "Picture This", ESPN meant "Permanently Eradict This Image From Your Cerebral Cortex", then yeah, I'd say they picked a great headline. A closer look for the mashocists out there: 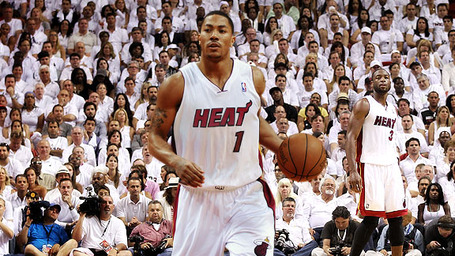 I sent this image to several friends and co-workers, and the general reaction elicited ranged from 'hurl' to 'barf'. Literally every person referenced how this image made them want to throw up. It reminded me of this classic Wayne's World scene:

In the end, it's only a fake picture, much like all of those LeBron-in-a-Bulls-jersey Photoshops we saw a year ago. Still: terrifying, and I don't like it one bit.

Game 3 is Sunday. Derrick Rose, thankfully, will remain in a Bulls uniform.