Share All sharing options for: The Taj Gibson Fathead Is Officially Out: Game 2, Please Start Now

The Chicago Bulls didn't even get a chance to take the court again before -- oh, yes -- the official release of the Taj Gibson posterizing Wade Fathead.

A mural. And it looks like it comes with some nice stickers. 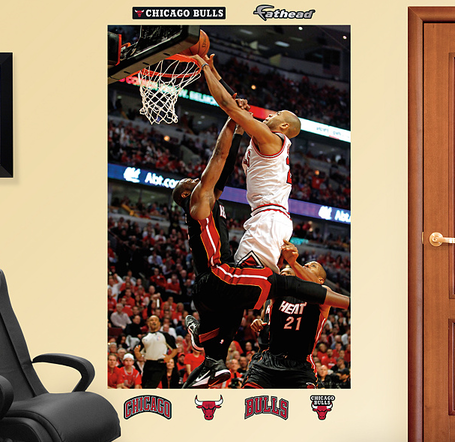 If there's one thing Bulls fans wanted to be really, unfairly nitpicky about following Game 1 against the Miami, it's that Chicago won by so much, one might wonder if they would lose some intensity and focus going into Game 2. I mean, yesterday was unofficially Taj Gibson day as the Internet celebrated with YouTube clips, photoshops, GIFs, and great, great tweets. This Fathead only adds to the calamity. The Bulls have maintained the standard-fare humble attitude, though. Really. Seriously. Gibson says he hasn't even seen the dunks yet.

With less than four hours till tip-off, it's possible he couldn't peep one of these Fatheads until after the game anyway. It's distraction proof!