Ronnie Brewer's Use Of Congratulatory Third Person Via Twitter, OK Or Not OK?

Share All sharing options for: Ronnie Brewer's Use Of Congratulatory Third Person Via Twitter, OK Or Not OK?

Throughout the 2010-11 regular season and playoffs, the fourth-year swingman has been about everything we've wanted him to be: uber-athletic, consistent energy off the bench, and one of the most hellish perimeter defenders the Bulls have deployed since the Jordan Era. Personality-wise, he seems just as humble and pleasant as all of the members of Blog a Bull's self-described 'Derrick Rose and the Chemistry-12.'

With all that said and factored in... Brewer referred to himself in the third person on Twitter Monday and posted a video of himself posterizing Chris Bosh from Game 1 Sunday. 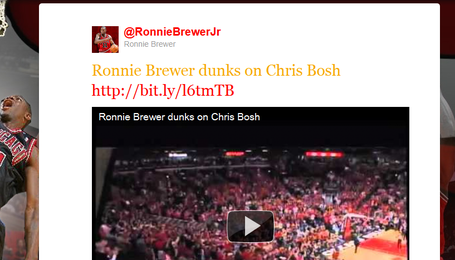 Cool or not cool?

Assuming he was the one to actually tweet this (certainly possible he wasn't, though the account is verified) -- would it make it any better if he was copying and pasting the text from somewhere? I think so. But still, it comes off as a little arrogant if those were his original words, no? Don't get me wrong, I like cockiness from athletes (this Rajon Rondo "piggy-back" play from high school comes to mind), but I'd rather it be less veiled than Brewer's use of the third person. How about "Check ME out as I eviscerate everyone's favorite punching bag, Chris Wesson Bosh!" That'd be the way to do it (Twitter's lack of bold and italics be damned).

Brewer later went on to re-tweet a fan's picture of the dunk, who said "I need this signed."

The final issue: does this now become bulletin board material for the Heat? The Bulls maintained a pretty humble attitude despite a huge victory in the series opener, so I personally wonder if tweets like this are the only thing Miami's going to be able to hold onto for added motivation going into Game 2 on Wednesday. My guess is, ultimately, tweets like this will fly under-the-radar. Brewer's not a starter, and his Bosh dunk certainly didn't hit the Taj Gibson stratosphere. He'll probably avoid heat for this one.