Reaction From 'Taj Gibson Day' On The Internet

Taj Gibson captured the hearts (and tweets) of America with his two incredible slam dunks against the Miami Heat in Game 1 of the Eastern Conference Finals. Here at SB Nation Chicago, we collected some of the best stuff the Internet had to offer.

Share All sharing options for: Reaction From 'Taj Gibson Day' On The Internet

Nothing gets the world talking quite like a good slam dunk, with the possible exception of a really overrated slam dunk. Baron Davis' Kia was nowhere to be found during Game 1 of the Eastern Conference Finals, so Taj Gibson took it upon himself to single-handedly give the Internet something to tweet about at the water cooler on Monday morning.

Gibson interrupted your regularly scheduled "Franklin and Bash" commercials on Sunday to deliver a pair of jams that ranked favorably on my personal 1 to 'Pippen over Ewing' scale for grading awesome dunks. If you're anything like me, you've seen Taj's pair of slammy jammies somewhere between 11 and 87 times in the hours that have passed since Chicago's decisive Game 1 victory. With good reason: any play that can get some to wonder aloud if it was superior to Marshawn Lynch's 'Beast Mode' dash against the Saints last season has obviously entered rarefied air.

Even the victim of Taj's first dunk, NBA Executive of the Year runner-up Dwyane Wade, gave props to Gibson's instaposter. He wasn't alone. In the wake of Game 1, all anyone wanted to talk about was the emergence of Gibson. Here at the new-look SBN Chicago, we took it upon ourselves to jot down some of the better Taj-related praise the Internet had to offer. Yeah, we're into that kind of thing.

No Duh Alert of the Day: the best Gibson Photoshop was birthed in the comment section of Blog-a-Bull. YFBB claimed this sucker broke the site's unofficial 'rec' record, and it's easy to see why. The Taj Mahal is open for business. 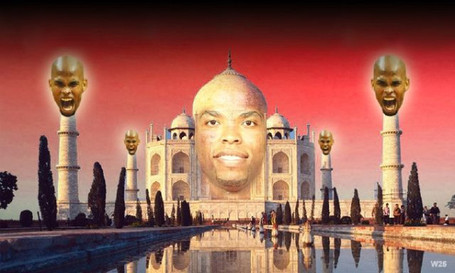 The cross on top of middle Taj's head is probably my favorite part.

If there's been one bummer during this post-season run, it's that Stacey King isn't allowed to deliver his Rucker Park-worthy catchphrases thanks to the NBA's exclusive playoff deal with TNT and ABC/ESPN. Yeah, we're saved from Old Man Funk ripping LBJ the first time he (theoretically) drops 40, but King's commentary is sorely missed. It's become as synonymous with Chicago's success this season as Joakim Noah's finger gunz  and Omer Asik protruding Adam's apple. CSN's ban hasn't stopped King from tweeting his thoughts in-game throughout the playoffs, though. King took a break from live blogging Swamp People to deliver a classic Kingism after Taj's first slam. 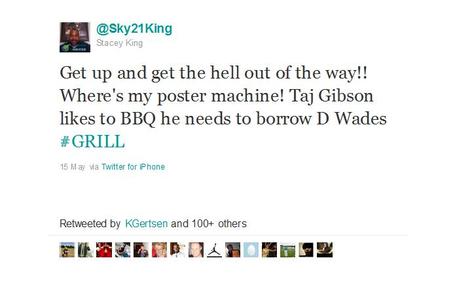 All of the people searching the #grill hashtag on Twtter were probably really confused.

Dwyane Wade won the contest, though. 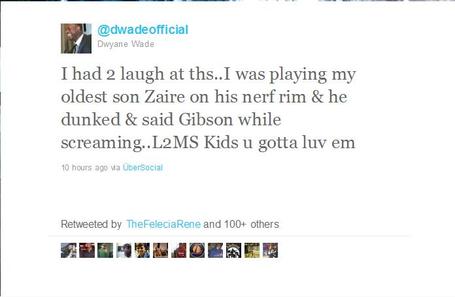 Argh, why does he have to be so damn likable? Welp, we'll always have for LeBron and Ch Bo for sports hate.

In conclusion: way to go, Taj! You dunked on Dwyane Wade's face, dunked on someone else's face, and then got the entire Internet talking. That's a nice little Sunday.

Only way to end this post? With the greatest Taj meme of all-time, obviously. Click the pic.