When Taj Gibson dunked over Dwyane Wade in Game 1 of the NBA's Eastern Conference Finals on Sunday night, every fan of the Chicago Bulls -- and probably most fans of the Miami Heat -- had to suspect that it would end up on some sort of poster.

While there's nothing available in the official NBA Photo Store quite yet, the Twitter machine has those clamoring for a new desktop background covered with a beautiful black and white picture that should live up to everybody's expectations.

Before we get to that, however, let's take a minute to see how Wade is taking it.

"First time I got dunked on all year. I'll take my 90-to-1 (ratio) of my blocks and my dunks (upon). He really got pumped, it was good," Wade told the Chicago Tribune. "It was a very athletic play. I knew I didn't have a chance when I started back-pedaling when I saw him take off. It won't be the last time I get dunked on."

After the jump is a high-resolution poster courtesy of Ryan Hurst, but in case you haven't watched it yet, here's the actual dunk set to some awe-inspiring music courtesy of NBA.com. 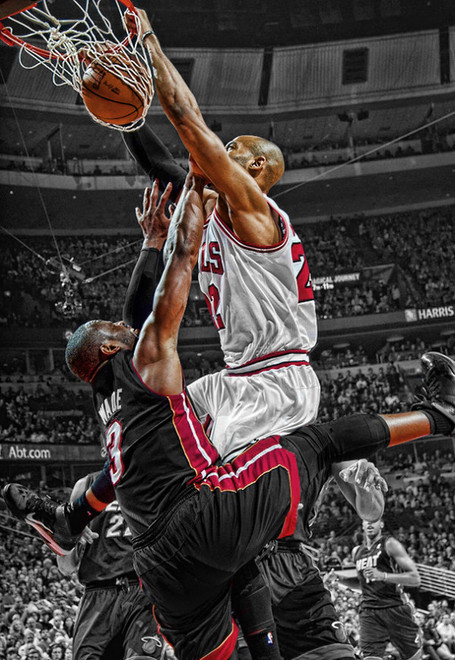 Just in case anyone hasn't watched the actual dunk, but needs to after seeing the picture (and believe me, you do), video is included here.

Bulls Team Too Much For LeBron James, Dwyane Wade and Chris Bosh