As someone who has, embarrassingly enough, been knee-deep in the sports blog game since freaking 2007, I'd like to think tonight represents something significant: The Basketball Jones -- or #TBJ, as they say on the Twitters -- makes the first stop of its international podcast tour (!) in our quaint little town. The two-hour show will start at 7 p.m. and takes place at Red Car, which is sort of by Navy Pier. Guests include Bulls radio announcers Bill Wennington and Chuck Swirsky, but I'd like to think that all 121 people who have already confirmed they're attending on the Facebook invite know who the real stars are.

It's going to be excellent, because TBJ has been excellent since the days of J.E. Skeets and Tas Melas getting drunk in the kitchen and talking shit about Bruce Bowen. Now they're big time: backing from a major Canadian media outlet, their own weekly half hour television program, a blog, a video podcast, and, fuck, a tour.

The entire Tremendous Upside Potential crew will be in the house, as will Blog-a-Bull and other select local media. It should be a good time. I've already placed the over/under on "number of dudes in flannel shirts" at 67.5 (Skeets took the over). I'm also hoping for an appearance by "Cuban Pete", Skeets' barf-happy drinking alter ego.

Getting drunk with bloggers. Trust me, guys: it's pretty cool.

I'll end this with a picture of blog editor Trey Kerby's Halloween costume. As you could probably guess, he's an Illinois native: 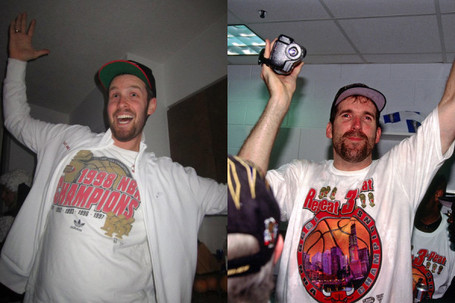 So toss on your best pair of skinny jeans, bring along Your Dad, and take in some hot live podcast action tonight. It should be fun.