Joakim Noah As The Chainsaw Massacre

Share All sharing options for: Joakim Noah As The Chainsaw Massacre 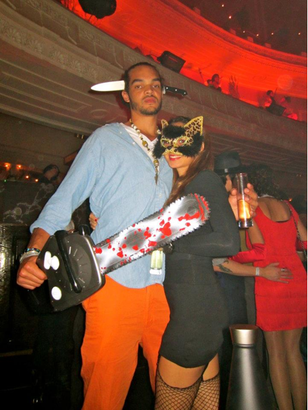 Halloween brings out the best and worst in costumes each and every year. Some are based on current events, think Octo-mom, John and Kate Goslin,any of the Kardashians, while others are more classic like vampires, superheroes, werewolf, hobo, etc.

Joakim Noah who's normal wardrobe would make a great Halloween costume in itself, went all out on Halloween this year. The Texas Chainsaw Massacre themed costume is very impressive in itself, but when the saw is held by a 6'11" man it adds an extra dose of scary.

I have a feeling if Joakim was a player's rep he would just need to wear this costume to one of the negotiations and the players would get the deal they want with somewhere closer to a 65-35 split as opposed to the 50-50 offering that David Stern and his merry men have put on the table. The longer the lockout goes, it might seem like the only way to solve the madness would be a Chainsaw Joakim mediation session.