Share All sharing options for: Michael Jordan Sports Jonathan Toews Jersey At United Center During Game 6 Of Blackhawks Vs. Coyotes

There's an entire Tumblr dedicated to the unfortunate fashion choices of former Chicago Bulls icon Michael Jordan, though few Chicagoans will find fault with what MJ was wearing on Monday night. Jordan was caught on camera in a luxury box at the United Center during Game 6 of the Blackhawks' first playoff series vs. the Phoenix Coyotes sporting a No. 19 Jonathan Toews jersey. Jordan was positioned near Blackhawks legends Bobby Hull and Stan Mikita, and received a thunderous round of applause.

MJ, man. Even during a Very Important Hockey Game, a 10-second shot of His Airness is the game's most buzz-worthy moment. Picture and .gif, after the jump.

Michael Jordan at the Blackhawks game. 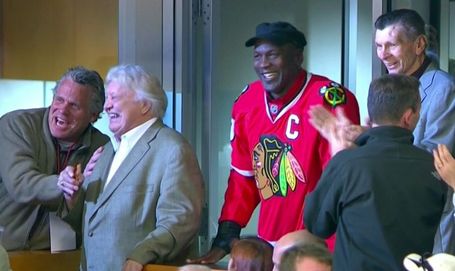