The Insane Month That Has Been Chicago Blackhawks Hockey

Z.W. Martin takes a look at the past month of Blackhawks hockey. From a nine-game skid to a four-game winning streak, it has been one wild ride.

Share All sharing options for: The Insane Month That Has Been Chicago Blackhawks Hockey

On January 20, fresh off a 3-1 victory over the Florida Panthers (and third in a row) the Chicago Blackhawks had a 99.31% chance of making the playoffs. In the next 32 days, Superman learned to skate, the 'Hawks lost nine straight, saw their playoff odds drop to 67.7%, their coach placed squarely on a very hot seat, and then, magically, turned it all around and put together a four-game winning streak, topped off by a 2-1 victory over the Western Conference leading Red Wings. Their playoff odds are back up to 94.67%.

It has been a dramatic month for our Madtown on Madison residents. Not too long ago, I was praising the very solid, above-average play of Chicago's goaltending tandem of Corey Crawford and Ray Emery. They promptly combined to allow eight goals against the Oilers the very next night. A lot of the criticism during the nine-game lapse has been put on Chicago's goalie duo and defensive unit, but, in fairness, all parts have been pretty bad, particularly their special teams play. 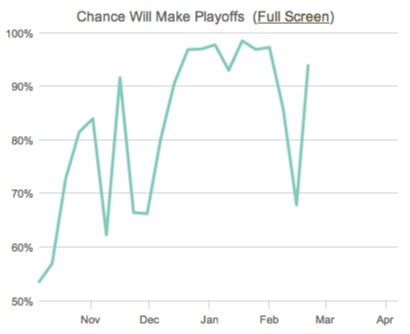 Over the nine-game skid, the Blackhawks scored once in 24 power player chances, while allowing seven goals over 28 opportunities for their opponents. Those percentages equate to a hair over 4% for the PP and a 75% for the PK. To put it in perspective, the league's worst PP% for the season is 13.66% by the Coyotes and 75.77% PK% by the Blue Jackets. Columbus is in last place in the NHL by nine points. Yeesh.

During the four-game turnaround, the special teams have not improved all that much, yet the 'Hawks are winning. This, in large, has to do with coach Joel Quenneville's willingness to mix up the defensive lines, as well as the reemergence of the Crawford Chicago saw last season.

2009 first round pick Dylan Olsen has been a major player in the defensive resurgence of the 'Hawks, averaging over 25 shifts during the current four-game streak, often times being paired with Duncan Keith. The call up, in response to Niklas Hjalmarsson's injury, has forced Coach Q to play a bit of musical chairs with his defensive lines. The shake up has given Chicago life, and with it, their play has improved tremendously. On top of the improved defensive play, Crawford has stood on his head in four straight games, allowing a total of five goals over the winning streak.

With the possibility of Hjalmarsson returning to the lineup tonight against Dallas, the 'Hawks are poised to potentially turn nine down into nine up with their new found defensive prowess and Crawford's return to the goalie Chicago signed to a three-year extension prior to the season.