Last night I took my little brother, Nick, to the Blackhawks game as a goodbye present. This week he's taking his talents to South Beach Port St. Lucie, FL to lace up size nine golf shoes for the first step on a quest to become a member of the PGA. Nick, however, wasn't the only New Trier High School alumni in attendance last night at the United Center following his sports dreams. Wilmette resident -- and Miami (OH) University standout -- Tommy Wingels, a member of the San Jose Sharks, scored his first NHL goal against Chicago in the third period, cutting a two goal Blackhawks lead to 4-3.

I wasn't the only proud sibling in attendance either.

Wingel's sister, Emily, was on hand to witness her little brother put one past Chicago goaltender, Corey Crawford, on a rebound goal at the 15:03 mark. Emily was a few sections over from me and when I saw the lamp turn red my attention moved to her. She cupped her mouth, hiding a smile and pure joy for her little brother.

Wingels also drew a hooking call on Niklas Hjalmarsson with under two minutes remaining in the game. The San Jose center had an open net to Crawford's left when the puck found its way to him. The Chicago defensemen reacted by wrapping his stick around the Shark, yanking him to the ground. Hjalmarsson's hook ended up saving the game for the Blackhawks, as they were able to hold off a crazy six-on-four Sharks man advantage to escape with a 4-3 victory. 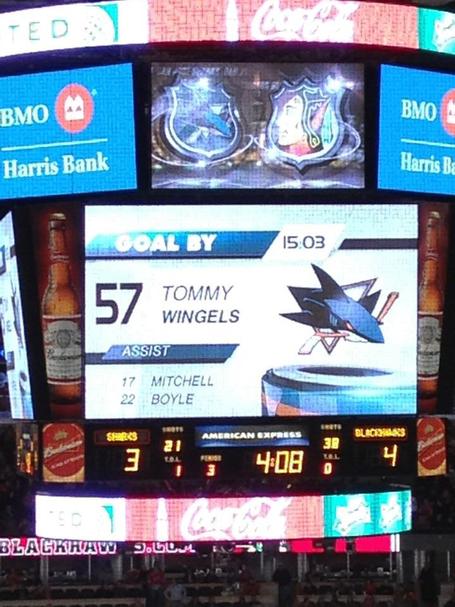 Congrats to Tommy and the Wingels family.