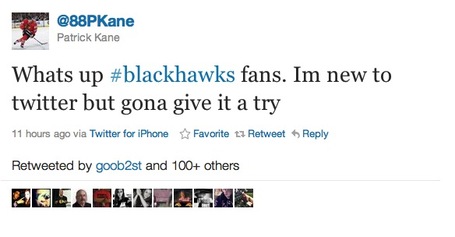 Not much, Kaner. What's up with you?

At first I was skeptical. @88PKane just seemed to obvious. Too clean. Too normal to be the real PK. I figured Kane's Twitter handle would have more to do with his boozing reputation than hockey, for some reason. Something along the lines of @PartyHawk. So I tweeted at my former boss at the Sun-Times and current Blackhawks beat writer, Adam Jahns, to confirm the account as the real Patrick Kane. He got back to me a few minutes later.

I think we all win.