Share All sharing options for: Another Former Chicago Athlete's House For Sale 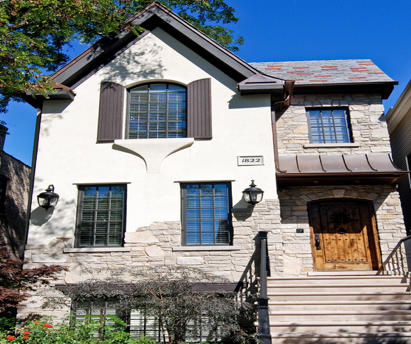 A couple of weeks ago, the Deep Dish reported that former Cub pitcher Ted Lilly's house, located three blocks from Wrigley Field, was on the market for $2.4 million.

If that's a little beyond your means, perhaps ex-Blackhawk Dustin Byfuglien's house is more to your liking. Byfuglien's Roscoe Village house is on the market for "just under $1.3 million":

In December 2008, Byfuglien bought the house, which was a teardown, for $1.265 million. He lived there with his longtime girlfriend, Emily Hendry. Built in 2007 and 2008, the house has 3 1/2 spa-caliber stone baths; three fireplaces, including an outdoor wood-burning fireplace; a professional-grade chef's kitchen; a large family room; radiant heat throughout the lower level; a full attic; a deck atop the garage; and slate, copper and stone accents throughout.â†µ

â†µByfuglien added a state-of-the-art media and entertainment center and security cameras, installed full closet organizers and converted one of the bedrooms into a theater room with a drop-down screen, said listing agent Curt Ratcliff of @Properties.â†µ

â†µ"He did quite a few upgrades to the house, and we think it's priced very competitively for such a great neighborhood," Ratcliff said. "They're sad to leave. They wanted to keep living there."

Bob Goldsborough, who wrote that article for the Tribune, wasn't kidding when he said "just under $1.3 million", either. Here's the listing at @Properties' website; the price listed there is $1,299,999 -- one dollar below $1.3 million. Happy bidding; the photo at the top is the outside of the house.