Share All sharing options for: Chicago Bears Training Camp: More Observations From Another Day In Bourbonnais

1. Something feels different about this training camp. Like I said, I've been to a lot of them.

Before the Chicago Bears even arrived in Bourbonnais, there seemed to be a developing sense among the team's biggest names that something special could be brewing. Brian Urlacher told reporters his team was 'stacked'. Fellow perennial Pro Bowl linebacker Lance Briggs said this might be the best team he's ever played on. As camps around the league started to take shape, fantasy magazines hit the shelves and football officially ended its eternal hibernation, it turned out the gamblers of America, the same ones that make this the country's most popular sport, liked the Bears' chances, too. Go to a sportsbook and you'll see the expectations on the Bears this season are real in the most tangible sense. Chicago's Super Bowl odds are as good as 8/1 in some casinos, among the top five most popular picks to win the championship.

On the drive down to Bourbonnais, those expectations are spelled out for all to see even before you hit the campus of Olivet Nazarene University. A local elementary school doesn't just predict the Bears hoisting the Lombardi Trophy at the culmination of this season, its sign goes as far to project the opponent and the score.

For all of the hype, some of the less heralded Bears aren't buying in, at least publicly. Football players are often painted brazen and self-assured, but the sight of a microphone or recorder can temper even the most strident optimism.

"We're out there competing," says safety Craig Steltz, who's been with the Bears since 2008. "We are just trying to come together as a team."

"You just work," says last year's first round pick, right tackle Gabe Carimi. "You never think about the pressure or other views."

Yes: these equate to the most stock answers imaginable at an NFL training camp. It's almost like the Bears paid attention when the Philadelphia Eagles made "Dream Team" boasts at this time last season before failing to make the playoffs. The Bears, at least the complimentary players, aren't acting nearly as imprudent. They are saying the things a humbled, blue collar football team known for defense and power running is supposed to say. Forget buying into their own hype, the Bears won't even acknowledge it.

The longest tenured Bear, longsnapper Patrick Mannelly, comes the closest to touching on his team's Super Bowl aspirations when I asked him about all the star power in camp.

"We have a lot more than I've ever seen. We had guys who have had great seasons and helped the team have great seasons in the past, but going into it I don't ever think I've seen star power like this top to bottom."

Every cog in a football team is vital, though it's evident the Bears' success this year will have more to do with the play and health of Jay Cutler, Brandon Marshall, Julius Peppers, Urlacher and Briggs than Mannelly, Steltz or Roach. Perhaps they just don't want to put even more pressure on their highly paid teammates than what they already face. No matter how big or small the role, however, these Bears can't escape the questions. There's a burgeoning sense of hope here and even the most standard football cliches won't halt it.

2. Jay Cutler is off limits. This is made very clear in the email granting me a press credential for the day, and none of the reporters are going to challenge it. Cutler is the team's biggest name and most important player, the one who moves the needle. The people love Jay Cutler. So when he walks by me to grab lunch, I hold out my phone and take his picture. 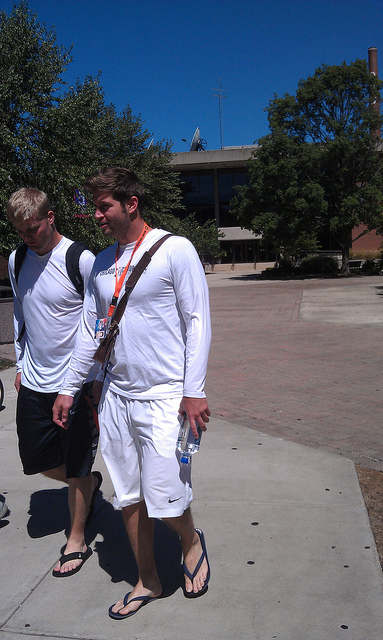 Jay Cutler does not appreciate the gesture. He glares at me dismissively, like I just broke the golden rule. He didn't exactly flick me off from a variety of angles, but his disgust is clear to see.

3. Brian Urlacher won't practice on Sunday for the fourth consecutive day, but when I arrive at Bears training camp just before the players hit the cafeteria for lunch, no one knows this. I'm talking to Roach, who moves from the strongside to the middle when Urlacher can't go. Given the relatively severe knee injury Urlacher suffered in the Bears' Week 17 win over the Minnesota Vikings to end last season and his ginger steps around the campus of Olivet Nazarene, it seems logical enough to ask Roach about playing the middle in Urlacher's absence.

I begin asking a long, drawn out question to Roach about the change in responsibilities that comes with playing middle linebacker. I note he has to "call plays and stuff". I am not the most gracious interviewer. Before Roach can answer, Cutler exits the cafeteria and brushes past us while walking alongside backup quarterback Josh McCown. He gets maybe five steps away from us before turning around mid-stride to glare at me.

Cutler is long gone from junior high, but he remembers how to deliver the type of condescending comment that makes seventh graders feel bulletproof. Jay Cutler is openly mocking me, and I feel slightly less out of place.

Even a day later, I can't stop laughing when I think about it. What a petulant bastard.

I love Jay Cutler. He might be my favorite football player ever.

4. I'm trying to get the Bears to talk shit about the Detroit Lions. It seems like a reasonable thing to do.

The Lions won 10 games last season, two more than the Bears, en route to breaking a long playoff drought. Detroit is one of three teams expected to win double digit games in the NFC North in 2012, and they'll no doubt be a royal thorn in the side of Chicago.

The Lions are considered one of the NFL's dirtiest teams, led by tyrannous defensive tackle Ndamkong Suh. Suh spent last Thanksgiving stomping on the head of Packers' offensive lineman Evan Dietrich-Smith. He did this three times before stomping on his arm. He was ejected and would be suspended two games.

The Lions have had a noisy offseason, too. They've had a ton of players get arrested, several twice. The team is facing a palpable amount of suspensions as the season opens.

So I ask the Bears: will Detroit even be able to suit up 47 players in Week 1, or will they have too many players suspended?

The Bears aren't taking the bait.

Mannelly: "I don't want to comment on that. Our division has got to be the toughest in the NFL."

The Bears are no fun.

5. To get to the practice fields at Olivet Nazarene, fans first need to walk through a gift shop. It's a brilliant bit of strategy by the Bears. Almost everyone in Bourbonnais is dawning Chicago paraphernalia, most boasting the very expensive jerseys of Urlacher, Cutler or Devin Hester.

There are some things on sale at training camp, though. Take these Cedric Benson jersey t-shirts: 30 percent off! 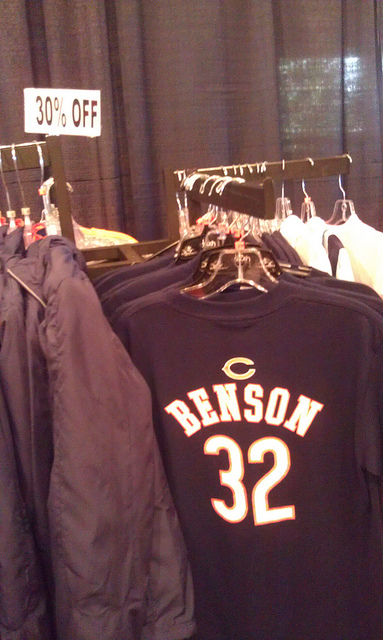 6. The Bears are running seven-on-seven drills about 45 minutes into practice. Wide receiver Terriun Crump catches an out route towards the sidelines before being driven out of bounds by starting cornerback Charles Tillman. The play takes Tillman and Crumb into the assembled media. Peanut runs into Tribune reporter Vaughn McClure, grabs him on the shoulders and yells "BITCH".

I should probably try to talk to Tillman next week. He seems cool.

7. Back to the start of the day: as we're waiting for the Bears to pick up their lunch, Sun-Times reporter Sean Jensen approaches me. I introduced myself to several of the reporters last week, but not him.

"Are these sunglasses better for ya, bud?"

He has different sunglasses in hand. It seems like a good time to note the Media Apparel Power Rankings are on hiatus this week. Everyone looked great. I'd like to think they knew the fashion police were rolling through.

Yo rookie wide receiver Alshon Jeffery, have you been hazed at all during your first NFL training camp?

"They made me get up in front of everyone and sing."

What did you have to sing?

"'Lean On Me'. It was pretty hard but it was funny at the same time." 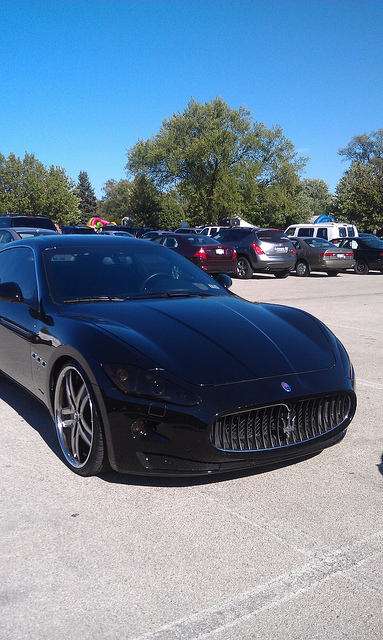 10. ESPN's John Clayon is at training camp. Alas, he doesn't have a ponytail.

Clayton is waiting to talk to wide receiver Earl Bennett, but not before I'm done. I ask Bennett about expectations, about the division, about how the presence of Marshall will affect his season. Then I ask about ASAP Rocky, because Bennett posted photos on Instagram of the New York rapper's set at last month's Pitchfork Music Fest.

Clayon grabs him before I can ask if he'd ever bonded over "Purple Swag" with Cutler. I doubt Clayton asked that one, either.

Funniest sight: Cutler riding to training camp in the passenger seat of a golf cart, while backups Josh McCown and Jason Campbell are standing on the back, riding to the practice field.

Video of the day: As I walked off the practice field, the fans were screaming for Charles Tillman's autograph. He was playing with his kids. I took a video: 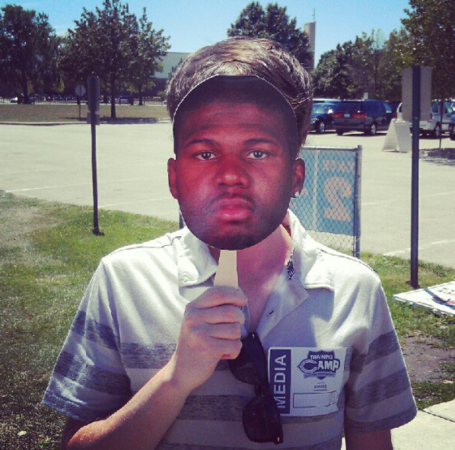 Previously: Week one in Bourbonnais.