SB Nation Chicago's Ricky O'Donnell was back at Bears camp on Sunday, where the health of Brian Urlacher continued to be Bourbonnais' biggest concern.

Share All sharing options for: Chicago Bears Training Camp: Notes From A Final Sunday In Bourbonnais

1. When Brian Urlacher emerges from a cafeteria at Olivet Nazarene on Sunday afternoon, I'm talking to D.J. Moore about video games. It's entirely possible this isn't the best use of my time. When I finally realize what's happening, Urlacher's turn holding court in front of every other reporter in Bourbonnais is essentially over. My exclusive on Moore's FIFA dominance over Earl Bennett suddenly feels insignificant.

No worries, the people who make their living covering the Bears everyday are generally wonderful at their jobs. I check Twitter minutes later and Urlacher's quotes are everywhere.

"Sept. 9, I'll be ready to play for sure. That's really all that matters to me."

At least on this particular Sunday, that's really all that mattered at Bears camp.

Oh sure, there were still positional drills and a good deal of fully padded 11-on-11 action, but none of it seemed too important. At this point, with just days remaining before camp breaks for good, the bigger picture is the main concern. That begins and ends with the health of Urlacher's left knee, an ailment that has kept him off the Bourbonnais practice fields for nearly a week.

O'Donnell: Brian Urlacher Injury: When Do We Worry About The Chicago Bears Middle Linebacker?

When I ask assorted teammates if they're worried about Urlacher's durability, no one breaks the company line.

"Brian will be there. Brian is our leader."

Football players are remarkably predicable with a recorder held to their mouth. This is probably for the best. But are they telling the truth?

It's impossible to know. As someone who has basically watched every snap of Urlacher's pro career, I can say confidently the Bears are in big trouble if the eight-time Pro Bowl linebacker isn't on the field and playing at a high level.

Urlacher has been one of the biggest names in this sports-crazed city for over a decade, but he somehow still feels underrated. Urlacher's role in Lovie Smith's signature Cover-2 has as much to do with the plays he prevents from ever happening as the plays he makes. In two of the last three seasons in which he's played all 16 games, Urlacher has finished with zero sacks. He did have three interceptions last season and a couple fumble recoveries, but No. 54's impact has always felt bigger than the stats say.

The Bears know they need him and so do the fans. Until Urlacher proves he is healthy and can still be a great player in the middle of an elite defense, the Bears' Super Bowl aspirations will hang is the balance. This is the biggest story surrounding the team. It almost feels like the only one.

2. Sid Luckman is unanimously considered the greatest quarterback in Chicago Bears history. He threw his first forward pass in 1939.

Though this doesn't amount to breaking news, we'll spell it out anyway: the Bears have always been known for defense and power running. It's the formula that has been the bread-and-butter of the franchise for over 90 years.

Go to Bournbonnais in 2012, though, and no one is excited about the defense. If anything, there's a sense of trepidation largely stemming from Urlacher's left knee. The defense just needs to hold up, now. This is an offensive football team.

While the thought may not be true until it's proven that way on field in games that count, it certainly feels that way. The acquisition of star wide receiver Brandon Marshall and the long-term commitment to running back Matt Forte has Chicago buzzing about the offense. My expectations are unwavering: if this isn't the best Bears offense of my lifetime, it will be a tremendous disappointment.

It's not like the bar is set particularly high. With "all the pieces in place" -- shouts out to Dave Wannstedt, who ruined my childhood -- there are no excuses. The Bears need to score and score often.

I asked Devin Hester after practice on Sunday if he thinks the Bears are finally shifting in identity.

Yeah. The way it's looking, we're starting to spread the ball out a little bit. With Matt Forte, last year and a couple years previously, we've been pounding him. Running a lot. But now with the weapons that we got, not only Marshall but Alshon, they're helping us out on the outside, giving us some go-to guys on the outside. Some big body guys. It will help us spread it out a little bit.

Somewhat shockingly, this will be Hester's fifth season playing wide receiver in Chicago. This might be the first one, though, in which he isn't expected to break out.

Hester is a piece, but his development as a pass catcher is no longer the be-all-end-all for a stagnant offense. The Bears finally have an ace receiver in Marshall, relegating Hester to what amounts to "one of the guys". No one is expecting him to turn into Steve Smith anymore.

This is a good thing, and I sense Hester agrees.

It's funny how adding one elite receiver suddenly transforms an underwhelming group into what might be the most exciting position on the team. Brandon Marshall's presence is already having very real effects.

3. I wish I was at Bears camp on Saturday instead of Sunday. Because, on Saturday, D.J. Moore wore this t-shirt. 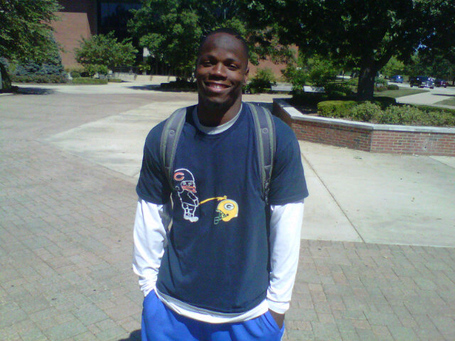 He says a friend found it on Twitter and bought it for him. When I ask him if 'plans on pissing all over the Packers this season', he doesn't really know what to say.

Moore is a character. He's probably the best quote on the team and the most likely to give you a truly bizarre anecdote. Case in point: when camp began, Moore needed a TV. Like any unfathomably wealthy football player would do, he asked a fan for one. He's been using it ever since.

"I don't watch it too much. I just can't not have a TV. I feel kind of boxed in. Me and Earl have been playing FIFA."

As the Bears take the field for the start of practice, it's Moore who's signing autographs. He carries a Sharpie with him. I have never seen this before. 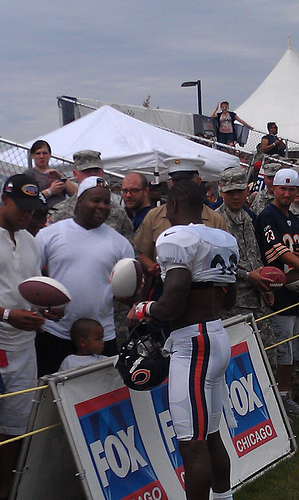 4. This is my third straight Sunday in Bourbonnais, and I still can't find someone wearing a Rex Grossman jersey. This disappoints me greatly.

But worry not! There are enough horrible jerseys at training camp to go around.

A young kid with a mohawk is repping Nathan Vasher. A 20-something dude is rocking a Marty Booker. Another little kid is spotted in an orange Thomas Jones. The best might be an older guy in an Erik Kramer jersey. If only he was accompanied by a Jeff Graham jersey and a Curtis Conway jersey, we'd really be in business.

The most perplexing jersey sighting of all? Two -- 2! -- dudes in a Dane Sanzenbacher jersey! 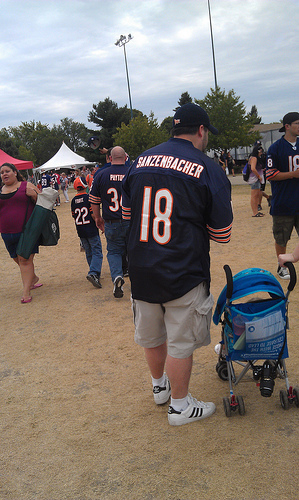 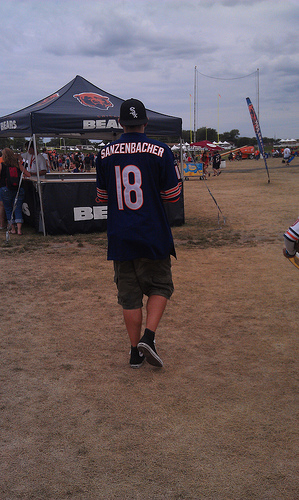 They walk right by each other and don't even acknowledge each other's existence! I am again disappointed.

I ask the first guy if he's related to Dane Sanzenbacher.

I asked the second guy if he was related to Dane Sanzenbacher.

No one here is related to Dane Sanzenbacher.

5. Sunday is sort of a boring day at Bears camp. I only managed to piss off one person.

Unlike last week when Jay Cutler went out of his way to mock me -- arguably one of the better moments in my life -- the one person I angered this week doesn't even play for the team. It was Bears radio voice Jeff Joniak.

Joniak is great, I think. He sounds like football, which is the highest compliment you can give any announcer. Bored during practice, I tweeted this:

So bummed Jeff Joniak isn't at this practice. Was going to ask him to describe the local media 'from left to right'.

And then, after practice, it's Jeff Joniak! I am so excited. I go up to him with my phone set to video mode and my finger about to hit the record button. Just as he does every Sunday during football season, I ask Joniak to describe the scene on the field "from left to right".

6. Though Sunday is relatively uneventful, I still get my kicks in talking to the media. Jeff Dickerson of ESPN Radio 1000 says the recently signed Rashied Davis does not automatically have a spot guaranteed on the team.

"It's a nice opportunity for him, but he still has to play well."

I ask if it's a competition between Davis and The People's Champ (Sanzenbacher) for the final receiver spot, but JD doesn't think so. Fair enough.

Also overheard, when chatting with the media about former Bears running back Cedric Benson signing with the Packers: "Is there enough weed in Green Bay?"

That's the type of analysis you don't hear often enough in the newspaper or on the radio.

7. One other quick media story. Larry Mayer is casually talking to Rashied Davis. Mayer recounts a time he was at the Bears Fan Convention and some guy is holding a Bears helmet signed by every member of the 1985 Super Bowl champs. This guy is wasted.

Larry says: "You know this is about to bring down the value of this helmet by about 1,000 percent, right?"

They both sign the helmet. Drunk people are funny sometimes.

8. This was my last Sunday covering the Bears in Bourbonnais. Just wanted to say everyone was super cool and I appreciated the opportunity. The mainstream media guys were all very approachable and down to Earth, even when I was making fun of their clothes. The players were totally accessible and very gracious in answering my stupid questions about their favorite season of Laguna Beach. The Bears staff who hooked it up were helpful along the way. Thanks, everyone.