Share All sharing options for: Chicago Bears Training Camp: Stray Observations From A Day In Bourbonnais

I would argue I indeed do have good parents, but they were undeniably terrible at vacations. Case in point: there was a four-year stretch in the late '90s where my annual summer destination was the cheapest hotel room in Platteville, Wisconsin. The Chicago Bears made Platteville their training camp home for years, and so did my dad. The first year I went to training camp, I walked off the practice fields and into a movie theater to see "Men In Black". I had just turned 10 years old, the year was 1997. I have gone to either Platteville or Bourbonnais to watch the Bears practice every year since. On Sunday, I finally weaseled my way into a media credential.

I have lots of training camp memories that are very likely only funny to me. I remember my little brother asking Darnell Autry for his bandana after practice, and Darnell Autry telling him 'no'. I remember my little brother settling for Steve Stenstrom's used wristbands. I remember when Cade McNown's golf cart nearly ran over my uncle. I remember my cousin Katie breaking her arm in one of those weird inflatable obstacle courses while Dave Wannstedt stroked his well-coiffed mustache no less than 200 feet in the distance. I remember being super jacked up when the Bears' newest first round draft pick, linebacker Brian Urlacher, signed two of my trading cards.

What seems asinine to me in hindsight is that it never bothered me most kids my age were probably going to Disney World. I thought Platteville was great. When I was 11, watching Glyn Milburn muff punt returns in 101-degree heat was the cat's pajamas. I was probably doomed to blog life well before I ever realized it.

Let the record show that I still truly enjoy training camp, probably because the Bears are one of my favorite things in the world, for better or (usually) for worse. Here are a bunch of stray observations from my Sunday in Bourbonnais.

Q: Pro sports have a long tradition of hazing the rookies. What have these guys made you do during your first few days in camp?

A: We have to go to the store and buy a bunch of stuff. Twinkies and all that. And we had to carry pads yesterday.

Q: Who's been the biggest bully so far in camp?

A: I don't think anyone is necessarily the biggest bully. [ed. note: it is really funny to hear a pro football player say this sentence.] They had their rookie hazing so they understand it and have to give it to us.

Q: This is a team with a lot of big names on defense. How have Urlacher, Peppers and those guys been treating you?

A: "They've been good so far. If I ever need anything, I can go to them for help. So far, it's been great."

Q: You been doing summer football camps your whole life: high school, college, and now in the NFL. How does your first NFL camp compare? Given the rule changes in the latest CBA, my theory is that it actually might be less intense than what you did at Boise State or even in high school.

A: "We did have very intense practices at Boise State, but this is definitely intense. We're constantly working here in practice, so I think it's a step up for sure."

Football players are remarkably soft-spoken. For being the proud, well paid bearers of our civic pride that they are, they are also very hard to recognize without a number stuck to their chest and back. This goes doubly when every player is wearing the same t-shirt and shorts. My friend and former colleague Eli Kaberon yelled "Hey Shea" out loud at least once to a player who was not Shea McClellin, and he knows more about football than everyone you know. It reinforces just how anonymous most of these guys are outside of the name-in-lights headliners.

3. The day started with the assembled media waiting for players to enter and exit a cafeteria where they would load up with a pre-practice lunch. Most players brought back full boxes of food. Matt Forte just grabbed a bag of Cracker Jacks. 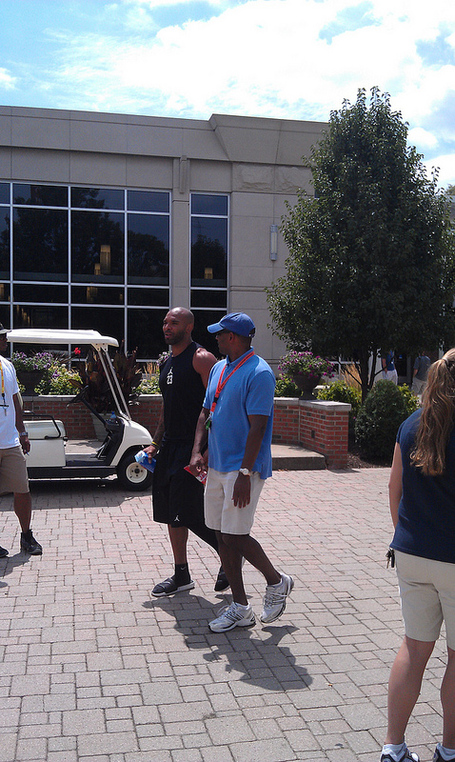 4. It was made very clear to us that Cutler was off-limits for the day. In a sea of reporters that would flock to the likes of Israel Idonije and Gabe Carimi, it was pretty weird to see Cutler stroll through without anyone even attempting to make eye contact. Also: he looked to be wearing a pair of Kristin's yoga pants. 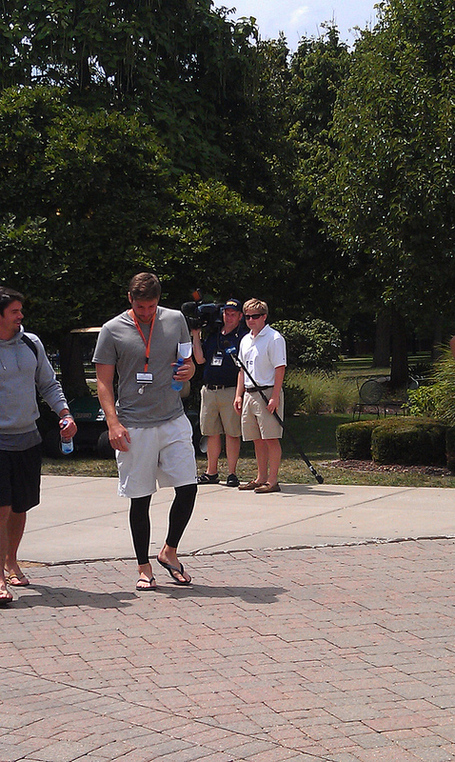 5. D.J. Moore wore Charlotte Bobcats shorts. I asked him about it. 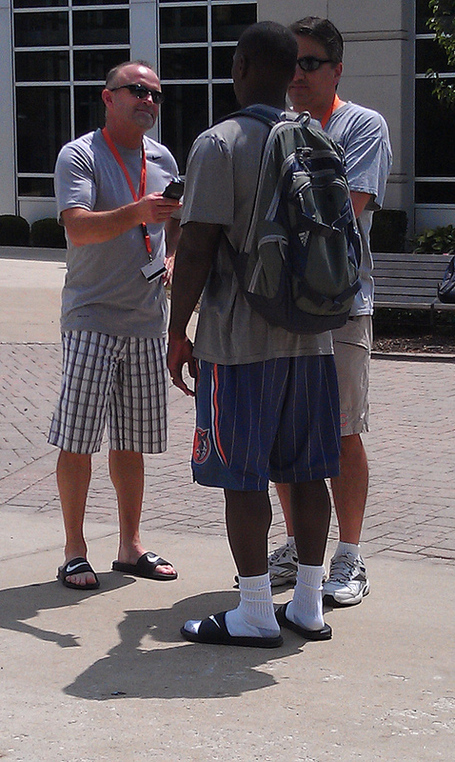 "I went to a game last season. They gave out free tickets."

Me: Well, now they have Michael Kidd-Gilchrist. That's one good player.

Asking football players about the NBA is cool. Moore had other stuff to say:

"If I'm a superstar, I hate playing special teams. If your name ain't Urlacher, Briggs, Peppers, Peanut, you're just one of the guys."

6. The newest Bear, defensive tackle Brian Price, comes to town with a heart-wrenching back story. He also came wearing a ridiculous backpack and glasses without lenses, a la the Miami Heat. 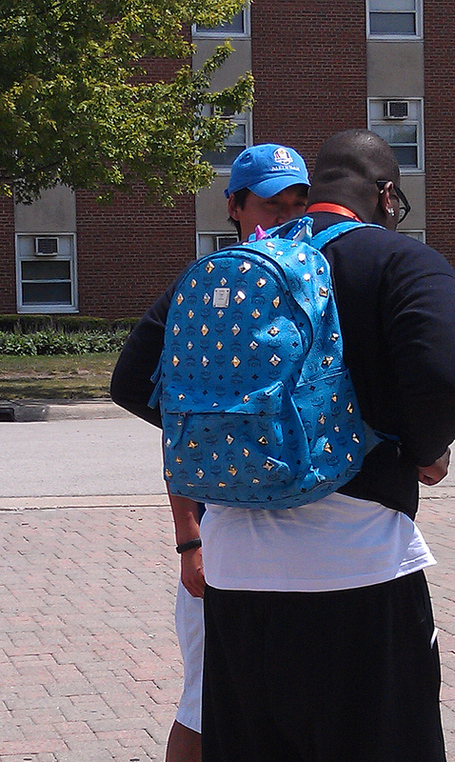 And now, a brief intermission for Media Apparel Power Rankings.

The Bears have long boasted a top-heavy roster during Lovie Smith's tenure, but it feels even more exaggerated this year. I think that's because of Brandon Marshall, who certainly seems to carry a heavy presence.

Brandon Marshall is huge. It's jarring. It was comical when he was standing next to Johnny Knox on the sidelines. 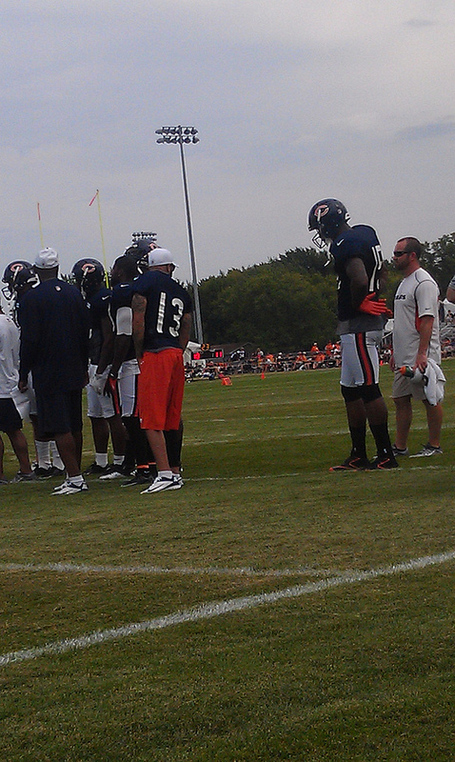 I feel like that picture doesn't even do it justice. Marshall is a big dude. Assuming he doesn't have another off-the-field incident, he should be among the most popular athletes in the city before the end of the first half in Week 1 against the Indianapolis Colts.

Marshall is the guy. Cutler was looking for him early and often in drills, and it doesn't take long to realize the Bears have never had someone like this on the roster.

When Marshall was matched up against Charles Tillman in drills, it was a battle. But when Tim Jennings or anyone else drew the assignment? Like men vs. mice. There was one particular play in wide receiver vs. cornerback drills that just seemed unfair. Matched against Kelvin Hayden, the Bears' one-time Super Bowl foe, Cutler threw deep. There was plenty of contact -- probably an illegal amount -- while the ball was in the air, but the outcome was never in doubt. Marshall slipped past Hayden, readjusted to the ball in the air and soared for a touchdown grab.

Do you remember the one season Marcus Robinson was awesome? That's what it will be like cheering for Marshall this year, only he should be even better than Robinson at going over the middle on intermediate routes. The Bears' offense should be a lot of fun this year, lord willing.

8. Up close, there is little separating Jay Cutler's voice at the line of scrimmage from Christian Bale's much maligned Batman voice. I half expected him to grab Armando Allen by the collar during practice and yell "WHERE ARE THE DRUGS?". 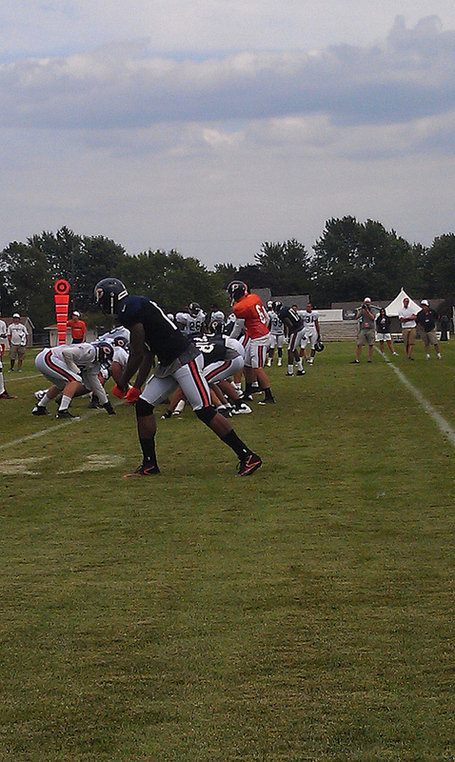 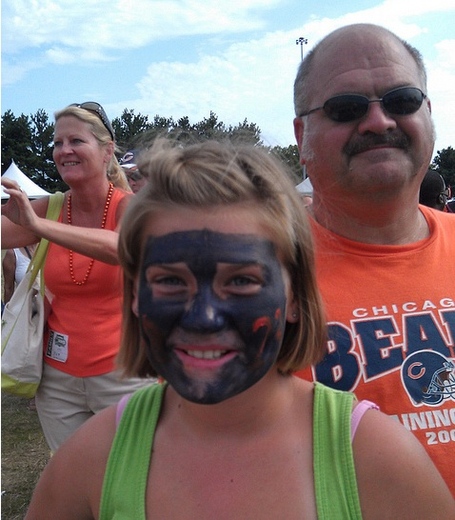