Park District Superintendent Michael Kelly has been trying to host a hockey game at Soldier Field for nearly a decade. Although the Chicago Bears stadium missed out on hosting the NHL Winter Classic in 2009, there will finally be some outdoors ice hockey coming to the venue on Feb. 17, 2013. The college Hockey City Classic

Brian Hamilton of the Chicago Tribune reports that the Hockey City Classic with feature the Notre Dame Fighting Irish playing against Miami (Ohio) and the Wisconsin Badgers taking on the Minnesota Golden Gophers. The two weeks of rink-based events are expected to kill the grass at Soldier Field, but re-sodding in March has already been factored into the budget.

Hamilton also was able to get a look at an artist's rendering of the Soldier Field rink. It appears as though the effect will be suitably stunning. 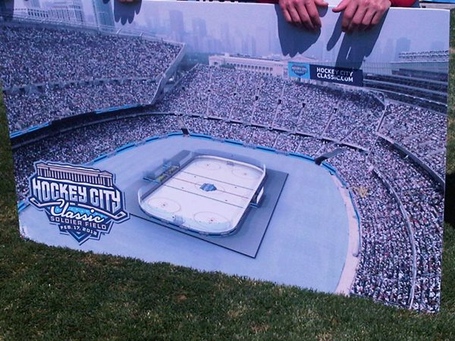 The hope is that eventually Soldier Field will be able to play host to the prestigious NHL Winter Classic.