It was not too long ago I reported that Chicago Bears linebacker Brian Urlacher was dating 90s sex icon Jenny McCarthy. Well, they are back in the news. McCarthy made it public she accidentally texted her son Evan's dentist a naked picture of herself instead of Urlacher. McCarthy's side of the story and a picture of the couple together following the jump 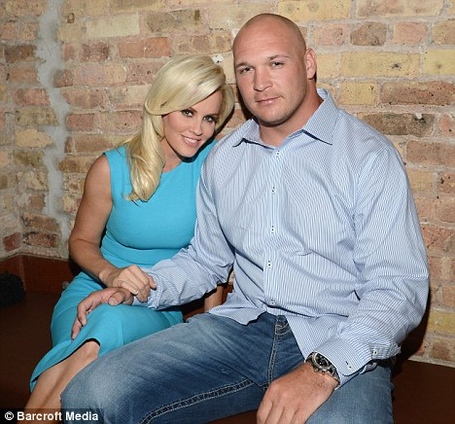 She said on The Wendy Williams Show: 'It's horrific to remember. [My son] woke up and was like, "There's this weird thing on my gum." I saw this abscess sticking out from his gum and I was like, "Oh my gosh, that's disgusting!"

The picture was intended for Chicago Bears linebacker Brian Urlacher, 34.

Why does this not happen to me ever? I am constantly getting texted or emailed by moms all the time for baseball and not ONE has happened to send me booby shots of themselves. I find this grossly unfair. Come on, Karma, I've been good lately. Reward me with some naked texts. Okay?

I guess it's not really that big of a deal in this case considering a quick Google search of McCarthy will result in, like, 7 million shots of her naked. Then again, if this guy is 80 and as technology challenged as McCarthy seems to be, maybe this is his first time seeing her warlocks. And if that is true, this incident was kismet. Everyone should see Jenny McCarthy naked at least once before they die. And that day may be coming soon for Dr. Old Balls D.D.S.