You know what dad doesn't have? These super rad Chicago Bears jeans. 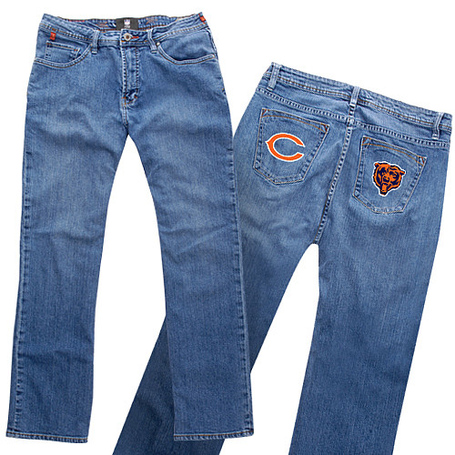 If SB Nation Chicago knows dads like we think we do, this gift will kill it. And for the low, low price of $74.99, you can't go wrong!

Do you have any idea how versatile these Chicago Bears jeans are? They're not just for dads, you know. Fashion tips, after the jump....

Idea 2: Get yourself a pair of Chicago Bears scissors and turn these Chicago Bears jeans into Chicago Bears jorts! It is summer, after all, you idiot. Do you really want to be a Summer Jeans Guy? Don't be that guy. Nobody likes that guy.

Idea 3: Now that you've got your Chicago Bears jeans or jorts, it's time to find some shoes to go with the outfit. SB Nation Chicago humbly suggests these Chicago Bears crocs. Can you imagine how this outfit will go over at the Bourbonnais county fair? Prediction: like gangbusters.

Idea 4: You are a music guy. You have tickets to Lollapalooza and Pitchfork, and have been searching for the perfect outfit for months. Last year, you and your two bros went as the Three J's -- Jamal Mashburn, Jimmy Jackson and Jason Kidd. So sick. How can that be topped?

And then you've got it. Step one, jorts-up those jeans. Obvious first step. Step two, secure one of the following Bears throwback jerseys: Craig Krenzels, Kordell Stewart, Jonathan Quinn, Shane Matthews, Chad Hutchinson, Moses Moreno, Henry Burris. There's a lot of shitty Bears quarterbacks to choose from, which is a good thing because finding the jersey of any of these dumbasses isn't going to be easy. Just don't wuss-out and settle for an Erik Kramer jersey. Not ironic enough, man. His 1995 season was the stuff legends are made of.