I went to school at Miami (OH) University. There's a long standing tradition in Oxford that students name the houses they're living in. Names like Pen15, (Un)planned Parenthood (next to Planned Parenthood, natch) and Absolut Angels were common. I lived in a house next to a Best Western. Paris Hilton's sex tape had also been recently released, so we figured The Paris Hilton was a natural fit. (Our slogan: Come for our Eiffel Towers, bubble baths and showers.) Brian Urlacher was also dating Paris Hilton at the time, so one of my roommates got the following autographed picture from his uncle for Christmas. 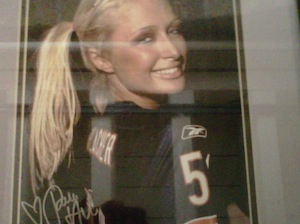 Awesome. Urlacher is back at it again. And by back at it again, I mean dating a pseudo-famous blond best know for being naked on camera. This time, it's Jenny McCarthy. Video of McCarthy admitting to the relationship and discussing her upcoming Playboy spread following the jump.

When asked to confirm or deny the rumors (I didn't even know there were any. You?) about Urlacher and McCarthy dating, she was short and quick in her response:

"I can confirm that yes it's true, we are dating." [Annoying guy needling for more.] "Go Bears, that's all I can say."

But more importantly, at nearly 40, why, Jenny, why are you heading back to Playboy for one more shoot?

"This is my salute to the milfs."

12-year-old me is officially dead.