Chicago was shook to its core by the NATO summit and ensuing protests this weekend, with weaponized riot cops and rowdy objectors creating a surreal scene in the city's streets. Beyond the noise cannons, night sticks and unkempt hippies, actual politicking was getting done at McCormick Place, with President Barack Obama and a host of dignitaries focusing on issues surrounding Afghanistan. After one summit, Obama took his fellow world leaders to dinner at -- where else? -- Soldier Field.

Obama also used the opportunity to toss the pigskin around on the home turf of his favorite football franchise. We've got an image, after the jump... 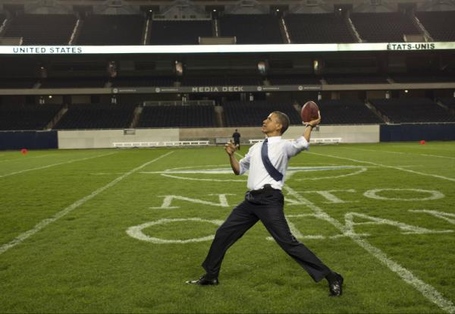 No matter which way you lean politically, it's an undeniably cool photograph for Bears fans.

Stay tuned to SB Nation Chicago for more information, and for in-depth analysis on the Chicago Bears, be sure to visit Windy City Gridiron. And drop by SB Nation NFL news hub for more updates and commentary from around the league.