Brandon Marshall Tests The Boundaries Of Male Fashion On SportsCenter

Share All sharing options for: Brandon Marshall Tests The Boundaries Of Male Fashion On SportsCenter

Newly acquired Chicago Bears wide receiver Brandon Marshall is in Bristol today, making the rounds with a variety of appearances on ESPN. He showed up to the live afternoon edition of SportsCenter dressed like this: 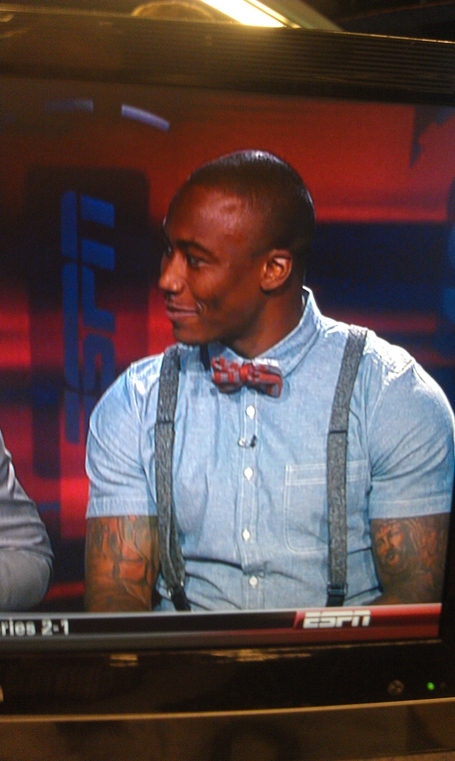 This was the best description we saw of Marshall's getup:

Brandon Marshall could not look more like a male stripper. Suspenders. Bow tie. Smedium shirt's every thread hanging on for dear life.

Aside from looking sort of ridiculous, Marshall spoke at length about his ongoing mental health battle and how he fits into the Bears' offense.

It's almost jarring how eloquent Marshall is with his words. Football players are paid to, well, play football, not speak, but Marshall is particularly adept when it comes to detailing his bouts of mental illness and how he's fought to combat them. For someone who's been accused to violence against women multiple times, he comes off as exceedingly likable. When you hear him speak now about how he's changed as a man, it's hard not to believe him. "The NFL saved my life," Marshall told SportsCenter.

As for the Bears? Marshall told SportsCenter he's shooting for "16 touchdowns, 1,600 yards and 12 pass interference calls" this season.