It was three years ago yesterday that the Chicago Bears traded for quarterback Jay Cutler.

Winning a championship is hard. Unless your team does it, every season ends in disappointment. These are the simple facts of being a sports fan. It's enough to make you think we're all an odd breed of masochists -- why exhaust so much time and energy into something that has such a small mathematical chance to pay off in the end? Yes, sports give us incremental highs all the time. A great win over a rival, a sweet dunk, a hard hit, the chance a perfect game can be thrown in front of you, out of the blue. But, communally, we dive in head-first aware that the ultimate payoff of fandom -- a championship -- might only come around a few times in an entire lifetime, if that. Cubs fans, of course, aren't even that lucky.

This is all a roundabout way to remind you that Jay Cutler was traded to the Chicago Bears three years ago yesterday. I was sitting in my college apartment when my buddy Eli -- now an editor at Pro Football Weekly -- texted me the news. Afterwards, I went to Chipotle and talked to my dad on the phone. These are quite obviously the height of trivial events in one's day -- a text message, a burrito, a call home. But these things will stick with me forever because the day the Bears traded for Jay Cutler will always be one of my happiest days as a sports fan. And even as Cutler has faced a wealth of adversity over the past three seasons, we'll always have that moment, the moment when the Bears finally stopped being so decidedly Bears-like and finally -- FINALLY -- did something awesome.

I missed Super Bowl XX by a year and a half. I grew up in the Jordan era, but was only 11 years old for the sixth and final title of the championship run. As a kid, you can't help but take that for granted. Michael Jordan's greatness was all I knew; it would be impossible for a nine-year old to realize how blissfully insane 72-10 really was.

With the Bears, nothing was ever taken for granted. The Bears are my favorite -- they will always be my favorite -- and the Bears of the '90s and early '00s were rather miserable. Really bad. Unwatchable offenses, an endless list of bums at quarterback, clowns like Dave Wannstedt and Michael McCaskey running the show. They drafted busts like Curis Enis, Cade McNown, and David Terrell, their "prized" free agent signing were no better than Phillip Daniels or Bryan Cox, and they never made a move ambitious enough to send a jolt through the fanbase. The Bears were a lot of things growing up, but one thing they definitely were not was 'cool'. They were as far from cool as humanly possible. 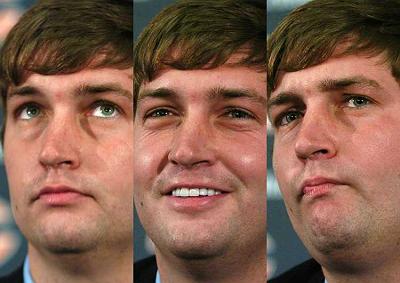 The Cutler trade was so cool. It was risky: only a handful of players ever had been traded for two first round picks, and it's not like Kyle Orton was as lifeless as so many who played the position in Chicago before him. It was spontaneous: there were rumors Cutler was trying to force his way out of Denver after the Broncos briefly flirted with acquiring Matt Cassel, but no one ever thought the Bears -- the Bears! -- would have the fortitude to pull it off. It was mostly just awesome in general: Cutler's tools are so obviously superior to every quarterback the Bears had ever employed, and he also came with a reputation as being a bit of a prick. The Bears do not roll the dice like this. They do not rock the boat like this. But then they did, and everything we thought was true with this franchise, everything we were resigned to, was flipped on its head.

I wrote something, Bobby wrote something; we probably made TUP All Jay Cutler Everything for the whole month; hell, maybe even the entire spring and summer. I don't know if it tops Devin Hester's opening kick return in Super Bowl XLI, or the no-offensive-touchdowns comeback against the Cardinals, or the back-to-back Mike Brown walk-off interceptions in 2001 as the best Bears moment of my life. But, who knows, maybe it does. While those on-field instances showcased why sports are great, the Cutler trade did, too. Just opposite ends of the spectrum.

Cutler's three-year Chicago tenure has been tumultuous, no other word to describe it. His first year, he led the league in interceptions. His second year, he got hurt in the NFC title game against the death rival Green Bay Packers -- of all teams -- and most of the free world (fellow players, writers, fans) was at least briefly convinced he faked the injury. Last season, everything started to come together before it all fell apart so abruptly when Cutler broke his thumb during a big win over the San Diego Chargers.

Alas. Nothing is ever as glamorous as it seems. Still, we'll always have the moment. When the Bears acquired Jay Cutler, I fantasized about style points. You know style points: those Kurt Warner-helmed Rams teams, the Moss-Brady-Welker Patriots, the current bunch in Green Bay. Football is one of the best things in the entire world, but football is not always, I don't know, graceful. At least the Bears' brand isn't graceful. But in the moment of the deal for Cutler, all of that could change. Football could have been fun and easy. There could have been 3rd-and-long conversions, and sweet fade route touchdowns, and play-action bombs. With Cutler, all of these impossible things were suddenly made realistic. With Cutler, the Bears could be, dare we say, fun to watch.

Heading into season number four, Cutler could finally have his best chance to make these daydreams become reality. He's got his favorite receiver from his long-ago Denver days now, Brandon Marshall. The offensive line made strides last year, even if 'average' still seems like a wishful thinking. Matt Forte will be back, too. The Bears can be good. But even if the Jay Cutler Experience never gets better than the day it began, I suppose it's OK. Sports can be about escape in the same vein as high-budget rap music: sometimes, you can still have a blast without basking in tangible riches.