Bears NFL Draft Rumors: 7 Players Chicago Could Take In The First Round

New Chicago Bears GM Phil Emery says he's looking at seven players in the first round. SB Nation Chicago editor Ricky O'Donnell guesses who might be on his list.

Share All sharing options for: Bears NFL Draft Rumors: 7 Players Chicago Could Take In The First Round

The Chicago Bears enter the first round of Thursday's 2012 NFL Draft in a precarious yet intriguing position: they're clearly talented, optimism is running high after an off-season filled with inspiring acquisitions, and at pick No. 19, they should be presented with a plethora of options. Draft picks in the middle of the first round aren't supposed to be particularly exciting -- the entire process is, after all, a crapshoot -- but this weekend's draft offers what is likely the final time for the Bears to add pieces to a team that could conceivably threaten for a shot at the Super Bowl. What's nice about the Bears' position going into this draft is that they have flexibility. They don't have any glaring weaknesses, but they could stand to upgrade, or at least add young depth, at numerous positions.

The offensive line has been Chicago's far-too-obvious Achilles heel for years, but everything out of management's mouth hints at faith in the continued development of the current players. Whether that's the correct option or not remains to be seen, but the offensive line did improve considerably after last season's Week 5 loss in Detroit, when things hit rock bottom for Jay Cutler and the offense.

New GM Phil Emery, who offers a welcomed relief from Jerry Angelo's typical draft day defeatism, said on Monday that the team is targeting seven players in the first round. It doesn't appear as if any of them are offensive linemen. Perhaps that's as much of an indictment on the draft class as it is the present day roster: by most accounts, the tackles in this draft should turn into fine pro guards. That's a backhanded compliment if there ever was one. If the Bears do not believe Stanford's Jonathan Martin or Ohio State's Mike Adams (to give two examples) can turn into dependable NFL left tackles, it's hard to blame them for wanting to address other areas.

With that in mind, here is our attempt to guess the seven players Emery is looking at in the first round. 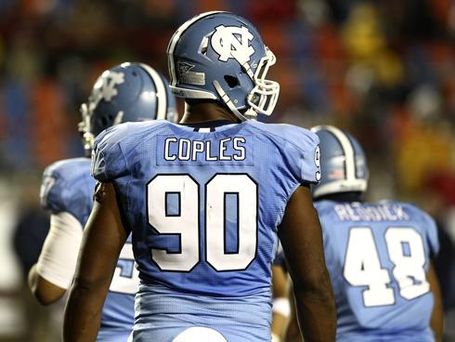 The book: Coples is a supremely talented pass rusher with a high ceiling who could very well be gone by the time pick No. 19 comes up. If he's still available, he would seem to be someone who would intrigue the Bears very much.

Coples had 7.5 sacks for North Carolina last season. He is so physically gifted that he's often looked at as an underachiever. Here's the first sentence of Coples' summary in the Pro Football Weekly Draft Preview book:

A top-10 physical talent who lacks the heart, desire and glass-eating makeup desired in the trenches and must ratchet up the intensity if he wants to play against big boys in the pros.

How he fits the Bears: Chicago has always been obsessed with pass rushers, and you wouldn't think that would change after the New York Giants rode a similar philosophy to the Super Bowl last season. Motivation issues are always a problem, but you can't teach the talent Coples possesses. Perhaps paring him with fellow UNC alum Julius Peppers -- who also once had a reputation as a player without a high motor -- could straighten out those concerns.

In the most recent SB Nation mock, Coples is going No. 12 to the Seattle Seahawks. There's probably about a 20 percent chance he slides to the Bears. If he's available, he would seem to be the pick. 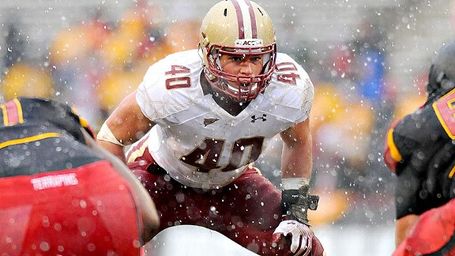 The book: Few prospects enter the NFL Draft with resumes as distinguished as Kuechly, an ultra productive three-year starter for the Golden Eagles. As a sophomore, Kuechly led the nation in tackles with 183. As a senior, he did it again, taking home the Butkus Award (top linebacker), the Bronco Nagurski Award (top defensive player) and the Lombardi Award (top lineman or linebacker) during a 191 tackle campaign.

People love this guy. Here's what Mike Mayock of the NFL Network had to say:

"He is one of the 10 best players in the draft. Historically, inside linebackers are not valued, mostly because they get replaced on sub downs in sub packages and nickel packages. He's the opposite and his strength lies in the pass game. He's the best pass-dropping inside linebacker I've ever seen in college football. He has instincts and speed. There's real value there because he's a three-down inside linebacker.''

Lives, breathes and sleeps football. Was described as the type of guy executives would want their daughter to marry during the interview process and as one of the best interviews in the past decade.

How he fits the Bears: All of the optimism currently surrounding Chicago in the wake of the Brandon Marshall trade will disappear on contract if Brian Urlacher or Lance Briggs suffer a serious injury. The Bears have no depth at linebacker, and could stand to upgrade their strongside starter. It makes sense to pick Kuechly as Urlacher's heir apparent and start him at the strongside until No. 54 is ready to hang it up.

In the most recent SB Nation mock, Kuechly is going No. 24 to the Pittsburgh Steelers. He could very well go before No. 19; there's probably about a 25 percent chance he slides to the Bears. If he's available, he would be the player I'd select, I think. He seems too good to pass up. 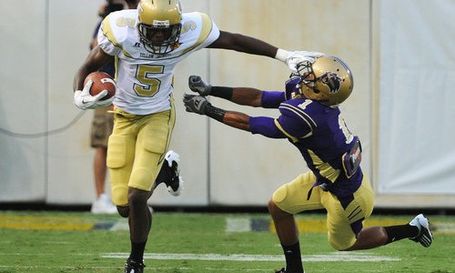 Playing Georgia Tech's triple-option offense, it stands to reason that Hill didn't get to showcase his immense physical talent much in college. As a junior last season, he caught only 28 balls for 820 yards and five touchdowns. There are plenty of other receivers in this draft with superior college production. I'm not sure any can match measureables with Hill, though.

Hill averaged over 29 yards per catch last season, best in FBS. He has rare size, speed and leaping ability. He has giant hands and a reputation for making one-handed grabs. Hill is raw and unpolished and bursting with potential. He could be a star, but he's also never been asked to run the typical NFL route tree. Size and speed are great, but there are also a lot of nuances that go into making an elite receiver. Hill carries a boom-or-bust label that appears very fitting.

How he fits the Bears: The Bears gave quarterback one big weapon this offseason. Why not another? If the plan is to surround Cutler with as much explosive talent as possible -- and why shouldn't it be? -- Hill is a very intriguing option. What team could possibly cover a pair of physical freaks like Marshall and Hill at the same time?

In the most recent SB Nation mock, Hill is not pegged to go in the first round. My gut tells me that's where he'll be selected come Thursday, though: his physical ability is simply too overwhelming to let slide to round two. He should be available at pick No. 19. Will Emery roll the dice? 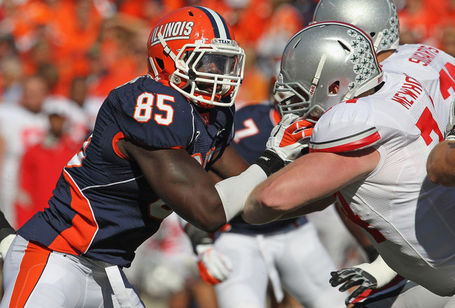 The book: 16 sacks, nine forced fumbles and had 22.5 tackles for a loss as a junior last season for Illinois. Need we say anything more?

Mercilus was phenomenal last year for the Illini, taking home the Hendricks Award as the nation's top defensive end. He was a one-year wonder, though, which could scare some teams off. His pass rushing techniques have also been described as "vanilla".

How he fits the Bears: Another pass rusher, though this one with less upside and more tangible production than Coples. He's been tied to the Bears for months. If he's available, he could very well be the pick.

In the most recent SB Nation mock, Mercilus is pegged to go No. 16 to the New York Jets the first round. There's probably about a 60 percent chance he's available. This could very well be your newest Bear. 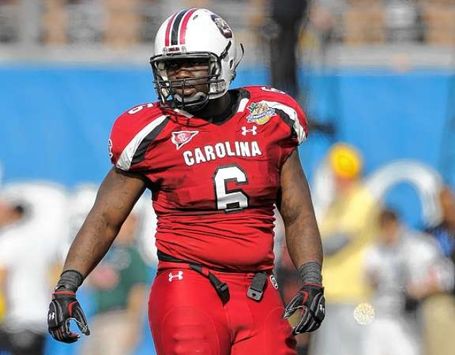 The book: Productive four-year player with obvious physical talent who could conceivably fit in as either a 4-3 end or a 3-4 rushing linebacker. "Tweener" is never a good description in drafts, and perhaps that's something to be wary of. However, Ingram's production (10 sacks last season), athleticism and motor make him seem like a safe choice.

How he fits the Bears: Pass rusher! Noticing a trend?

In the most recent SB Nation mock, Ingram is pegged to go No. 7 overall to the Jacksonville Jaguars. Other mocks have him falling to the Bears. I say there's about a 15 percent chance he's available at No. 19. 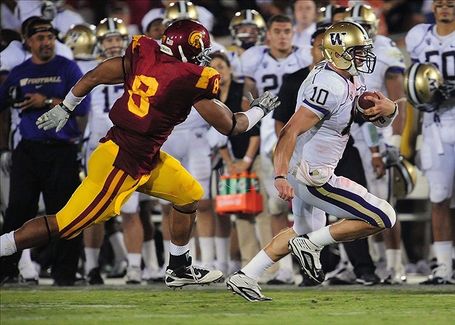 The book: Led the Pac-12 in sacks last season and bench pressed 225 lbs. 35 times at the combine with impressive results in tests designed to gauge explosiveness. Described in the Pro Football Weekly Draft Preview book as "looks chiseled from granite and is a physical specimen."

The PFW book also notes that Perry is a "better tester than football player" and "tape does not match workout numbers."

He isn't great against the run, either. But still: very high upside as a edge pass rusher.

How he fits the Bears: Read the previous sentence again. 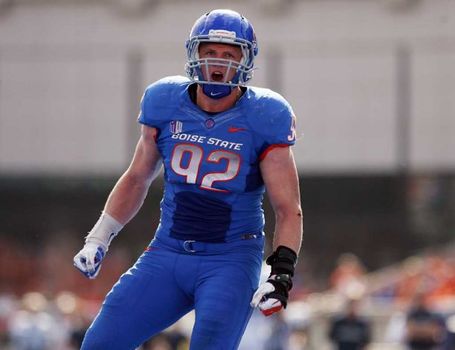 The book: This year's late riser. A month or two ago, he was projected to be a third or fourth round pick. Now, there are some who believe he won't be available at No. 19. He clocked the second quickest 40-yard dash time among defensive ends at the combine.

McClellin is another pure passer rusher who could fit different schemes: due to his thin-ish build, he could be better suited as a 3-4 rushing linebacker. There's talk the Packers, Patriots, and Steelers all like him. According to the Chicago Tribune, our Bears do, too.

How he fits the Bears: Pass. Rusher.

In the most recent SB Nation mock, McClellin is selected by the Chargers at No. 18. He'll probably be around when the Bears are on the clock, though. Is this recent buzz genuine, or just a smoke screen?