You don't need to sort through reams of data or major in molecular genetics to have a working knowledge of just how pathetic Chicago Bears quarterbacks have been since, oh, the dawn of time. The franchise's most revered and accomplished passer to date remains Sid Luckman, a man who made his first dropback in 1939 and hailed from the football factory that is Columbia University. TV networks will never let you forget this. During Brett Favre's reign of terror, FOX or CBS or whoever always had the graphic on hand: "List of Bears Quarterbacks Who Have Started Since Favre Began His Consecutive Start Streak". It was 20-plus deep, chalk full of passers only long-tortured Bears fans have heard of. This was a team that started Craig Krenzel, Jonathan Quinn, Rex Grossman and Chad Hutchinson all in the same year. It must be how Red Sox fans felt pre-2004 with every Babe Ruth mention whenever they played the Yankees. It was hell.

The 2009 trade for Jay Cutler has been a fix on Chicago's quarterback issues, mostly, save for those games when Cutler is injured or when Cutler decides to enter full-on 'Bad Rex' mode and throw caution to the wind. Cutler has had his fair share of 3-4 interception games during his largely successful stay as Bears quarterback, but he's currently enjoying his best year in Chicago to date. It makes sense. From the beginning, the Bears' passing game problem has always been a bit of a 'chicken or egg' dilemma: Was the Bears' aerial attack so impotent because their quarterbacks were horrendous, or because said quarterbacks didn't have any decent wide receivers to throw to?

It's a bit of both, of course, because football is the ultimate team game, a sport where a truly transcendent talent even at quarterback can't make up for a bad offensive line or bad a secondary or a bad pass rush. To achieve ultimate success in football is to have a team devoid of a bleeding unit, and trust me: for entirety of my lifetime, the Bears have been bleeding at quarterback and wide receiver.

Enter Brandon Marshall. The Bears acquired Marshall from the Miami Dolphins this offseason for two third round draft picks. When it happened, this site and others were quick to call him the best wide receiver in Bears history. Yes, before he ever played a game. Marshall has made all of us armchair analysts look a little less dumb this season.

With four games remaining, Marshall is on-pace to rewrite the Bears' record books. He's made a noticeable difference for a passing attack under Cutler that always yearned for exactly what he provides: a big, physical target who can go up and snag some of Cutler's, let's say, less accurate throws. The caricature of the 'gunslinger' is distinct by velocity, not pinpoint placement, and Chicago struggled during Cutler's first three years in town because he was throwing to a variety of short, underwhelming receivers. Not anymore: it isn't uncommon to see Marshall targeted 15+ times a game from Cutler right now, regardless of whether he's covered by three men. That's the type of confidence Cutler has in Marshall, and he's largely been rewarded for it.

Consider this: the Bears' leader in touchdown receptions last season was freaking Kellen Davis. He had five. That seems impossible, right? Marshall already has eight and hasn't seen his production dip the entire season, even with opposing defenses well-aware that he's Chicago's biggest threat on the field by a mile.

What Marshall is doing this season is crazy by NFL standards but downright illogical when you factor in he's a member of the Chicago Bears. With games against the Vikings, Cardinals, Packers and Lions still on the schedule, Marshall already has 91 receptions and 1,182 yards.

How does that stack up in recent Bears history? Here's a graph of the team's leading receiver, by yardage, for the last 10 seasons. 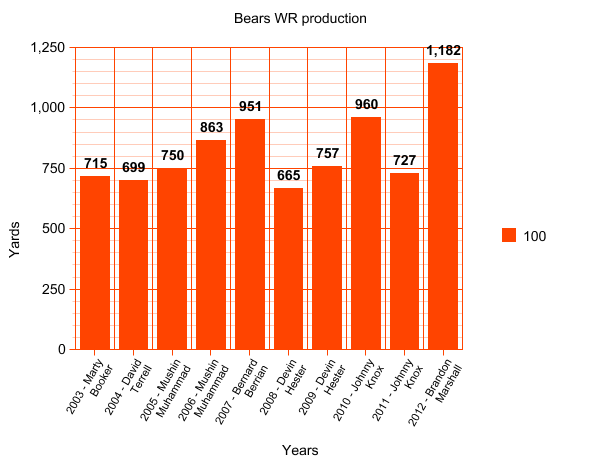 Marshall is already dwarfing everyone else, and just think how exaggerated the difference will be if he stays on this pace and finishes with 121 catches for 1,576 yards and 10 touchdowns. Those numbers do not seem real, at least not from a Bears wide receiver.

After Marshall torched the Seahawks last week for 165 yards, several outlets mentioned that his now six 100-yard receiving games this season, tied for the third most in franchise history. It's a testament to how bad the Bears' passing offense has been that I assumed this feat of games with 100+ yards was for a Bears career. It's actually a single-season mark -- and yes, Jeff Graham had over 100 yards receiving seven times in 1995, believe it or not. Still: Marshall is doing unheard of things in Chicago, and he's helped make this season eminently more watchable. The Bears have big play potential, potential for fireworks, and that's something few thought they'd ever say about this offense.

Speaking of "fireworks": it's only been the good kind for Marshall. Marshall wasn't traded for only a pair of third round picks because he didn't produce in Miami, it was because he has a long list of transgressions that made him a character risk. Since 2007, Marshall's rap sheet is at or near a DMX-level. Things reached a crescendo in April of 2011 when his wife stabbed him in the stomach. It wasn't that long ago!

Marshall has since been diagnosed with borderline personality disorder and has been exemplary when it comes to raising awareness for mental health. He's also become a devout evangelical Christian of the highest order, best captured in his ESPN rant against Stephen A. Smith earlier this year. It's no surprise that Marshall is totally in the bag for God right now, and it's certainly a better thing for his volatile nature to concentrate on than, say, drinking.

What's distressing is even with Marshall putting up huge numbers, the Bears' offense still really isn't all that improved. Brad Biggs pointed out some eye-popping numbers earlier this week:

[the] Bears entered Week 13 ranked 30th in total yards, 32nd in passing yards per game, 10th in rushing yards per game, 32nd in sacks per pass play, 32nd in yards per play on first down and 12th in third-down efficiency. The offense is all over the board and maybe nothing encapsulates that better than the recent slide in which the team has lost three of four games.

There are plenty of reasons for this, as Biggs notes, from Cutler's at times erratic play to a woeful offensive line to an injuries to rookie Alshon Jeffery. It isn't because of Marshall, though. With Marshall, the Bears at least have one great piece.

That new general manager Phil Emery did in one month what Jerry Angelo couldn't in 12 years -- acquire a game-changing receiver -- should have Bears fans filled with confidence moving forward. If Emery shows this same dedication to 'getting stuff done' every offseason, the Bears won't be a team dragged down by a single bleeding unit much longer. Next up is the offensive line, which is an entirely different animal. But we'll worry about that when the time comes. For now, I'm just enjoying Marshall and the first watchable Bears offense I've ever seen.