The Bear Trap, Week 13: Russell Wilson was more perfect than Jay Cutler, and Earl Bennett could have used some Adderall

The Bear Trap does not have a Russell Wilson "short" joke.

Share All sharing options for: The Bear Trap, Week 13: Russell Wilson was more perfect than Jay Cutler, and Earl Bennett could have used some Adderall

Welcome to The Bear Trap, a weekly look at the Bears game that was. In this space, we will deal with the most pressing issues surrounding the Bears and their previous game. We'll favor overreaction, both positive and negative, to fair, balanced analysis. We'll ask if the Bears should withhold planning the Super Bowl Shuffle 2012 music video and if Brandon Marshall's erratic off-field behavior has derailed the season yet. We'll wonder if Jay Cutler is best described as aloof or super-duper aloof, and tally the number of fucks the notorious Shoulder Shrug has given up to this point. All that plus some old-fashioned Packer hate. We'll keep it lighthearted as long as it's understood the hate is real and comes from a dark place.

So submit to the lengthy grasp of The Bear Trap. We just missed out on Russell Wilson by about 3/8 of an inch.

Tim Jennings Honorary Game Ball - This week's Tim Jennings Honorary Game Ball was a toss-up between Jay Cutler and Brandon Marshall. We decided to go with Cutler because this felt like a game that could have been 31-0 without him. We've all seen Cutler's ability to fit balls into seemingly nonexistent windows when given the time, but we usually don't get to see him strategically pick apart a defense with his legs. This isn't ideal, obviously, just a welcome addition to the norm. Previously, Cutler ran to avoid decapitation. Yesterday he ran to open up passing lanes and pick up first downs -- the result of much better protection than he's usually afforded. Besides being fun to watch, we felt Cutler deserved better. Ok, so 17 points is a paltry number to put on board and yet, there wasn't much more he could have done.

The Optimist's Take - Seattle's defense has been one of the best in the league, keeping opposing offenses, the Packers and Patriots chief among them, in check all season. The Bears moved the ball on this immovable force in the first half. Errors in judgement and, well, judgement were to blame for only 7 points from the first three drives. Lovie opted to got for it on 4th and 1 from Seattle's 15 early in the 2nd quarter up 7-0. A defensible decision, no doubt, but a curious one given his history. Hasn't Lovie always taken the points, especially with the lead? Where were we when the brass balls were plopped on the table?

On the very next drive, Earl Bennett, Earl "Sure Thing" Bennett, the only Bears receiver over a three-year period who could be counted on to consistently catch anything, dropped a sure touchdown. Yes, he had to quickly adjust from looking over his right shoulder to making the catch over his left shoulder. And yes, the sun happened to have peeked out at the worst possible time. The Internet unanimously agrees: NO EXCUSES. Ten points from those two drives would have put the Bears up 17-0 to start the game. We're not saying the result would have been different had the Bears been up 17-0, we're -- actually -- that's exactly what we're saying.

One more quick note: the patchwork offensive line (aren't they all?) looked pretty good Sunday. Seeing as this is the Optimist's section, we think they'll build off this performance and continue to improve each week.

The Pessimist's Take - Only three things in life are certain: 1.) Death 2.) Taxes 3.) The Seahawks losing on the road. Hell, Pete Carroll has managed to evade the first two, as well as the NCAA watch dogs, why not No. 3 to make it a clean sweep? To be fair, the Seahawks did beat the Panthers on the road earlier this year in an ugly game. It's just that a single road win tends to get lost in the shuffle when you're a perfect 5-0 at home.

What makes this loss particularly disheartening -- the pessimist's gospel -- is that this matchup is just about the best, THE BEST!, playoff matchup the Bears could hope for. The other likely alternative is the Giants at the Meadowlands. Christ. Excuse us while we vomit our dinner into the toilet.

NO. The Bears are going to start taking all the Viagra to get their edge back. We know their own uniforms are shiny and revealing and just ooze sex -- ESPN says they're the second best uniforms in all of sports. Still, that doesn't give them the right to start fucking themselves. See how well that defense holds up in the court of public opinion.

This Week's Adjective To Describe Jay Cutler - Imperfect or "The Opposite of Russell Wilson." Jay Cutler played one of his finest games in a Bears uniform and was completely one-upped by the unflappable Wilson. And really, how could he win? Did Cutler study film on his birthday? No. Does he look everyone in the eye? No, not even lowly security guards, and we have the visual evidence to prove it. You see, it doesn't matter, but it does.

Number Of Fucks Given - One for a season total of 9. Either Michael Bush can't catch a pass in the flat, or he was in the wrong place, or somewhere a dog barked when Cutty was trying to change the play at the line of scrimmage. Fuck-giving can be an extremely unscientific process. Sometimes you can see the method in his madness and other times he's the guy at the bus stop yelling racial slurs while repeatedly kicking the newspaper vending machine. 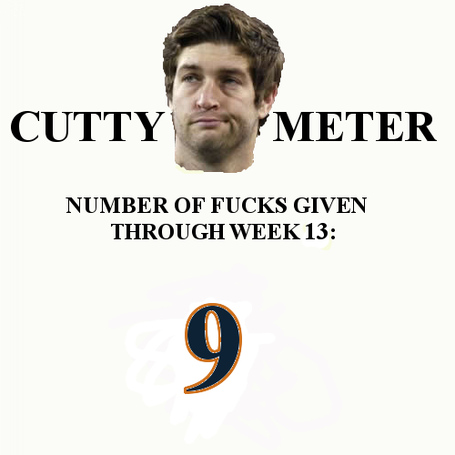 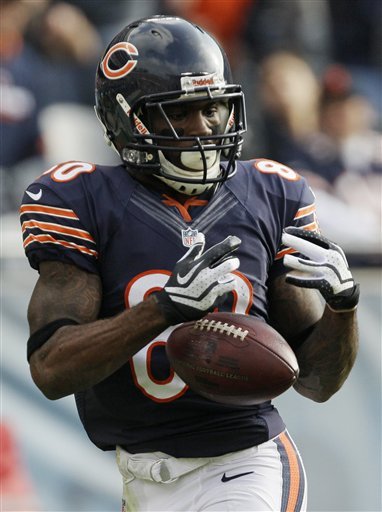 That split second before the brain has processed all of its information. At the time of this photo, Earl Bennett is likely unaware that he has dropped the ball that could have potentially won the Bears the game. There are many reasons why he could have dropped it: the sun, a difficult route adjustment at full speed, and the inevitable fact that everyone, even Earl Bennett, is capable of dropping a pass once in a while. No matter the given reason, all revert back to the same basic principle: a lack of focus. What could have helped Bennett focus, oh we don't know, maybe Adderall?

Starting corners Richard Sherman and Brandon Browner are the ones to call, and conveniently located about five yards away. That's not a receiver and DB hand-swatting while jockeying for position, referee, sir. That's the smoothest drug transaction that's ever occurred under your nose.

Requisite Packer Hate - Let's clear something up really quick. The Packers do not wear green and GOLD. We can't tell you how many times we've heard some Darwin Award candidate go on about the green and GOLD, the sanctity of the green and GOLD. It's YELLOW. The Packers wear green and YELLOW. Why they're so hell-bent on claiming gold is beyond us. Maybe it's because "green and gold" sounds better because of the fancy alliteration. Or maybe the mere mention of "gold" conjures up some image of supposed worth. Whatever the reason, stop saying it because everyone else is saying it. Notre Dame wears gold. Your "gold" looks nothing like Notre Dame's.