The Bear Trap apologizes for not 'Liking' or commenting on your photo of Aaron Rodgers in a thong.

Welcome to The Bear Trap, a weekly look at the Bears game that was. In this space, we will deal with the most pressing issues surrounding the Bears and their previous game. We'll favor overreaction, both positive and negative, to fair, balanced analysis. We'll ask if the Bears should withhold planning the Super Bowl Shuffle 2012 music video and if Brandon Marshall's erratic off-field behavior has derailed the season yet. We'll wonder if Jay Cutler is best described as aloof or super-duper aloof, and tally the number of fucks the notorious Shoulder Shrug has given up to this point. All that, plus some old fashioned Packer hate. Well keep it lighthearted as long as it's understood the hate is real and comes from a dark place.

So submit to the extended claws of The Bear Trap. Place your arms right here, Alshon.

Tim Jennings Honorary Game Ball - A distinguished head nod to Jennings, who was sidelined for a second straight week with a shoulder injury. No wonder the Bears couldn't capitalize on any of those interception opportunities. This week's Tim Jennings Honorary Game Ball goes to you, dear reader(s): Bears fans. Bears football is supposed to be a (mostly) enjoyable diversion from your everyday life; three measly hours at the end of the week in which you don't have to worry about that growth on your back or who your kids are talking to on the Internet. Instead, the Bears have taken the anxiety already present in your life and tripled it. This is not fun. These last six weeks have been awful. Would you continue to watch a television show if the first five episodes were crap? NO. Would you continue to date a person who made your life miserable every second of the day? NO. Out of all the noble causes you could have delved into, the positive relationships you could have held on to, the real-world issues you could have obsessed over; you decided to save yourself for football, and so did we. You deserve something much bigger and better than the Internet's most prestigious award for your loyalty, but it's all we can offer.

And to all the fans in attendance who booed in the 1st quarter with the game still knotted at 0, you get the award too! At least you didn't sell your tickets to Packer fans. That would have made our fan base look bad!

The Optimist's Take - The season is almost over. Seriously, that's all we've got. Week after week after week we've watched the Bears get strip searched by playoff teams and fringe playoff teams. Sometimes we've legitimately found a reason to be optimistic swimming through the sewage water, and other times, most of the time, we lied through out teeth in the interest of filling this section. The Bears could win the next two games by a combined 60 points and prance into the playoffs while Aldon Smith, Eli Manning, Russell Wilson, and Robert Griffin III all go down with season-ending injuries and we'd still anticipate a crushing first round loss. Needless to say, this section will exist next week in a modified form.

The Pessimist's Take - The Packers caught the Christmas spirit a week early, handing out gifts left and right on Sunday. Last we checked, one of those gifts was not a 'forfeit.' The Packers did everything short of forfeit to try and lose this game, and even if they had, the Bears probably would have found a way to screw that up too.

Where to start? How about Randall Cobb's botched backwards pass on a punt return? That's a play that looks great at 4:30 in the morning on Benzedrex! Benxedrez! Benzedrex! and 36 straight hours without sleep. Not so great up two scores in the 4th with the division on the line.

Mason Crosby made Olindo Mare look like a solid pick-up. Keep in mind that Olindo Mare is 57-years-old and hasn't been good since Sega Dreamcast was a thing.

The Bears didn't help themselves out either. First and Goal from the 5-yard-line doesn't seem like an impossible task until you remember they were only on the 5-yard-line because of a pass interference penalty. It's not like they could be expected to move the ball or anything.

Before the goal-line debacle, Cutler's interception at the end of the 1st half was an absolute killer. What looked to be a 7-7 game at halftime all of a sudden became 14-7, and then 21-7 after Green Bay scored on their opening drive of the second half.

Alshon Jeffery couldn't keep his hands to himself, which, in any context, is never a good thing.

Do you realize the Bears have averaged 14 points per game over their last six? Imagine the defensive meetings: OK, all we need to do is hold 'em to 13 or fewer, force at least three turnovers, probably score a touchdown, and we should give ourselves a CHANCE to win.

Basically, despite embarrassing themselves for most of the game, the Bears were given approximately 472 chances to get back in the game and failed to capitalize on every single one of those chances. We see no indication that this is going to change in the coming weeks.

NO. The Bears are going to watch Adrian Peterson break Eric Dickerson's single-season rushing record and revel in the fact they played a large part in such an amazing accomplishment.

This Week's Adjective To Describe Jay Cutler - Detached, as in something in his left shoulder/collar bone area is detached. We'll be the first to suggest Jason Campbell get the start in Arizona. Only because we want to see the Bears win a game 5-3 before we die.

Number Of Fucks Given - 3 for a total of 12 on the season. The most overlooked aspect of a probable organizational overhaul concerns Cutty's fuck-giving potential. We may be without Devin Hester, Kellen Davis, Mike Tice, and the majority of the O-Line next year. Who will the fucks be directed at? Will there even be any fucks to direct? 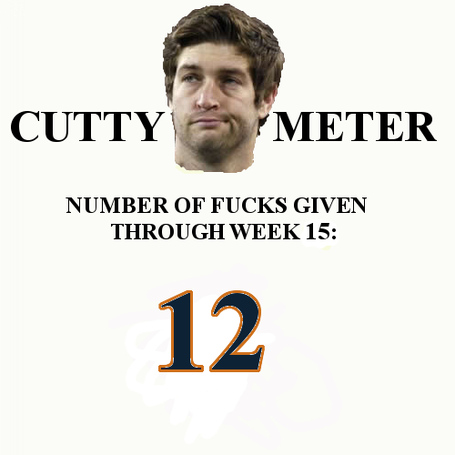 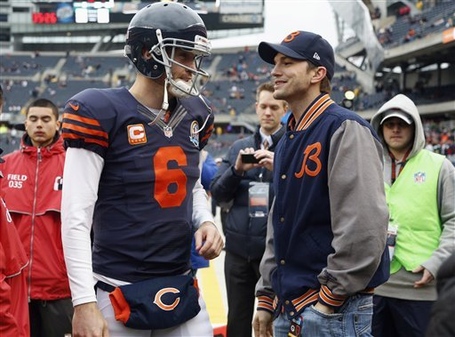 Ashton: Did I drive last night?

Ashton: HA! That was pretty funny. Thanks for playing along.

Jay: Playing along with what?

[wonders who the fuck that guy was]

Requisite Packer Hate - Congratulations on the playoff spot. Looking like a lock for the 3-seed with a shot at the 2-seed. We can't wait to see y'all try to win a playoff game without a kicker. Like, literally without a kicker. Mason Crosby's roster spot has been filled by another white fullback with a racial epithet for a last name. Your games are going to be like a 12-year-old playing Madden. 4th and 21 from your opponent's 30: GO FOR IT! Touchdown on the first drive of the game: GO FOR TWO!

Oh, who are we kidding? It's all just a pipe dream. "We're not changing kickers. Write that down right now," Mike McCarthy told reporters after the game. Mike McCarthy still uses Windows 98.