The Bear Trap has buried its head in the Minnesota snow.

Welcome to The Bear Trap, a weekly look at the Bears game that was. In this space, we will deal with the most pressing issues surrounding the Bears and their previous game. We'll favor overreaction, both positive and negative, to fair, balanced analysis. We'll ask if the Bears should withhold planning the Super Bowl Shuffle 2012 music video and if Brandon Marshall's erratic off-field behavior has derailed the season yet. We'll wonder if Jay Cutler is best described as aloof or super-duper aloof, and tally the number of fucks the notorious Shoulder Shrug has given up to this point. All that plus some old fashioned Packer hate. We'll keep it lighthearted as long as it's understood the hate is real and comes from a dark place.

So submit to the completely overwhelmed jaws of The Bear Trap. We're used to leaving our imprint on foes. Adrian Peterson left his cleat marks all over us.

Tim Jennings Honorary Game Ball - Pour a little liquor out for the injured Jennings, who watched from the sidelines in a hat bent as unorthodoxly as Johnny Knox's back. This week's Tim Jennings Honorary Game Ball goes to Brandon Marshall. The numbers speak for themselves: 10 catches, 160 yards and a touchdown. Marshall hauled in only four less yards than the five other Bears receivers who caught a pass. We're not entirely convinced Marshall didn't double their output. Who tallied those numbers anyway?

Quarterbacks are taught not to stare down their receivers, but in Marshall's case, does it really matter? Opposing defenses know the ball is coming his way, they double and triple team him, and he still, more often than not, comes away with the catch. Cutler throws it up to him, throws it low, shovels it, even has it tipped into his clutches. The ball is going to find those giant magnet hands regardless of the way it gets there.

With all that said, we cannot excuse Marshall's drop of a crucial 4th down pass late in the game. Of course, Marshall's drop was made possible by Devin Hester's crucial 3rd down drop. A product of his environment, indeed.

The Optimist's Take - With Urlacher and Jennings already out, Robbie Gould relegated to kicking extra points and maybe short field goals, and the Bears' poor form as of late, there was an air of negativity hanging over this one from the get go. Then, just to pile on, Adrian Peterson ran for 51 yards on the first play of the game, turning Chris Conte into his personal chew toy. Peterson would rush for 69 yards on the first drive, capped off by his one-yard score. The defense buckled down after that brutal first drive, allowing very little for the rest of the game. Peterson compiled about half of his eye-popping stat line on that first drive alone.

Already competing shorthanded, and knowing the offense would have to play even more conservative due to Gould's injury, the defense performed about as well as you could have expected them to under the circumstances. It's tough when your offense is the other team's best offense -- Cutler's two interceptions led to 14 Minnesota points.

Oh, and Devin Hester and Alshon Jeffery dropped touchdown passes. They'll catch those the next time, says the Optimist's section.

The Pessimist's Take - When you accept Jay Cutler as your quarterback, when you acknowledge your team doesn't stand a chance without him under center, you also have to accept that he can lose a game just as easily as he can win one. It would be unfair to place this loss squarely on the shoulders of Jay Cutler, but that's exactly what we're going to do for the sake of simplicity. All of those beautiful throws zipped into tight spaces are so easily undone when a couple of them find their way into a defender's hands.

The injuries are piling up now, including another hit to Cutler's head. This time he suffered a neck injury, to add to the list of injuries in or around his head that continue to be a serious concern. Every team is stricken with injuries over the course of a season. You just hope those injuries don't occur right about now, when the Bears desperately need everyone to be healthy. C'mon, when even your kicker injures himself during warm-ups, there's no reason whatsoever to be optimistic.

NO. The Bears are somehow going to miss out on the playoffs entirely. Lovie Smith is going to be the new head coach of whichever team will have him. Probably the Chiefs.

This Week's Adjective To Describe Jay Cutler - Morose. We couldn't help but notice that every time the camera was on Cutler his head was down. Every single time. How can Cutler be a leader of men with his head down all the time? How can your teammates look you in the eye when your eyes are cast down? Most importantly, how can you read coverages when your'e not actually looking at the defense?

Number Of Fucks Given - 0 to stall the season total at 9. Improbably, the cameras did not detect a single fuck given this week. Multiple interceptions, porous line play, burnt timeouts, a loss to a division rival with the playoffs on the line -- any one of these scenarios taken alone are usually grounds for plenty of fuck-giving. Put them all together and we expected an explosion of fucks capable of melting a good three inches of snow off the ground. Maybe our beloved Cutty is growing up. Or maybe fuck-giving is dependent upon picking your head up once in a while. 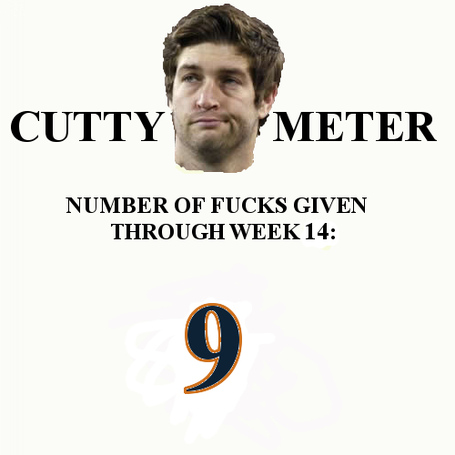 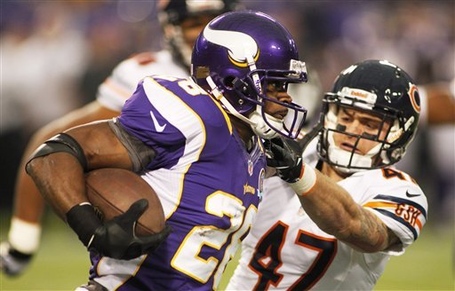 Arm tackling Adrian Peterson went about as well as you would have predicted for Chris Conte here. Peterson (with some help from the defense) is the reason the Vikings can win when Christian Ponder throws for 91 whole yards. A couple of weeks ago, we likened celebrating a win over the Percy Harvin-less Vikings to prominently displaying a participation trophy. What's it like losing to the Percy Harvin-less Vikings? Being deemed unworthy of a participation trophy?

Requisite Packer Hate - Thomas was a well-to-do guy. A wife and two kids. A real go-getter, that Thomas. The first to show up to the office every morning. Also the first to leave. "He always was kind of quiet," one of his coworkers told us when reached for comment. "A peculiar sort. I guess it never dawned on me until now." Thomas' wife was home sick. The kids were at their grandparents' to allow her to rest. Thomas, being the thoughtful chap he was, decided he would surprise his wife. On the way home he grabbed a bouquet of roses and a cup of that tortilla soup from Panera she liked so much.

He crept up the stairs slowly, expecting to find his wife fast asleep. Thomas opened the door and dropped the soup all over their brand new harlequin green carpet. He couldn't believe what he saw. His wife, his beautiful wife, in bed with another man.

"I, I," she stammered. "I thought you wouldn't be home for another fifteen minutes."

Thomas, a die-hard Packers fan, had his watch set to Lombardi Time.