The Bear Trap will one day get off to a rousing start, followed by taking the last quarter of the column off.

Welcome to The Bear Trap, a weekly look at the Bears game that was. In this space, we will deal with the most pressing issues surrounding the Bears and their previous game. We'll favor overreaction, both positive and negative, to fair, balanced analysis. We'll ask if the Bears should withhold planning the Super Bowl Shuffle 2012 music video and if Brandon Marshall's erratic off-field behavior has derailed the season yet. We'll wonder if Jay Cutler is best described as aloof or super-duper aloof, and tally the number of fucks the notorious Shoulder Shrug has given up to this point. All that, plus some old fashioned Packer hate. We'll keep it lighthearted, as long as it's understood the hate is real and comes from a dark place.

So submit to the kung-fu grip of The Bear Trap. A grip so tight, not even Charles Tillman could punch your leg out.

Tim Jennings Honorary Game Ball - As Brian Urlacher rumbled towards the end zone, producing what can only be described as the chopped & screwed version of the Bears' previous INT-return touchdowns, we were ready to hand him the award immediately. Here, Brian. Take it, please. And shave off that godforsaken mustache. You can support men's health awareness by writing a nice check. Then Charles Tillman continued to make us forget that forced fumbles are a fairly rare occurrence in a football game -- a skill far too difficult to be made to look so routine. With all due respect to Urlacher's vintage 2001-era performance, Matt Forte's all-purpose yardage, and Brandon Marshall's three touchdown catches, the Tim Jennings Honorary Game Ball goes to Charles "Peanut" Tillman. You are a living legend, sir. We should be saluting you. Please accept this award as a token of our appreciation.

The Optimist's Take - When Tillman punched the ball out of Kenny Britt's arm on the very first play from scrimmage, you could sense it was going to be one of those days. Not soon after, the score was 28-2, firmly in hand, yet we still refused to take a bathroom break because we did not want to risk missing two more scores. Tillman would incredibly force 4 fumbles, and the defense as a whole, 5 takeaways. Urlacher's interception return for a touchdown was the Bears' 7th of the year, putting them in a 3-way tie for 3rd most in NFL history, only two away from tying the record, WITH HALF THE SEASON LEFT TO PLAY. Sometimes historic players and teams are taken for granted in the throes of a grueling NFL season. Other times, certain teams and players demand your attention -- every game is a Tillman-esque punch in the balls. The Fox broadcast put up a side-by-side statistical comparison of the 2012 and 1985 Bears. They were not "Average number of yards surrendered since 1982 in the state of Tennessee when the opposing team has a losing record and the temperature is under 60 degrees" - type stats. They were the bread-and-butter stats that have been used to measure defenses' effectiveness for decades. The 2012 Bears stacked up quite nicely with 1985. If that's not a reason for optimism, we don't know what is.

The Pessimist's Take - One defensive touchdown, one special teams touchdown, and 14 points off turnovers. Basically, the offense didn't even need to take the field, and maybe shouldn't have in the first half if the Bears wanted to keep the shutout intact. The bookends of the offensive line are looking really -- well, not good enough to keep the bigger books from falling over. J.J. Watt doesn't read books, apart from The Bible, which is a pretty big book. I see a lot of the 2006 Bears in this team. Reliant on the defense and special teams to score, looked invincible through the first half of the season, then increasingly more vulnerable in the second half when the schedule got tougher. Yeah, yeah, that season ended in a Super Bowl -- a Super Bowl LOSS.

YES. The Bears are going to eat some greasy pizza, drink some shitty beer, converse with the next lane over, and bowl a 300 game with bumpers.

This Week's Adjective To Describe Jay Cutler - Steady. Cutty started to come apart at the seams last week in a last second win against Carolina, even directing some of his frustration at the fans. "We have the best fans in the world," he said after the Tennessee game. Being spotted two touchdowns in the 1st quarter, and a little second half rest will do wonders for a man's psyche. As far as we could tell, Cutty spent most of his off-time bullshitting with Brian Urlacher. Always a good sign.

The Bears will need a steady influence in the coming weeks. We read somewhere that men with mustaches are universally recognized as authority figures. No word on how full those mustaches have to be before leadership qualities start to kick in.

Number Of Fucks Given - 0 for a total of 5 on the season. Way too easy of a game for a single fuck to be given. We felt this week was the calm before the storm. Fans in attendance who dare to holler a goddamned word when the Bears are in the red zone next week risk the wrath of one thousand fucks. 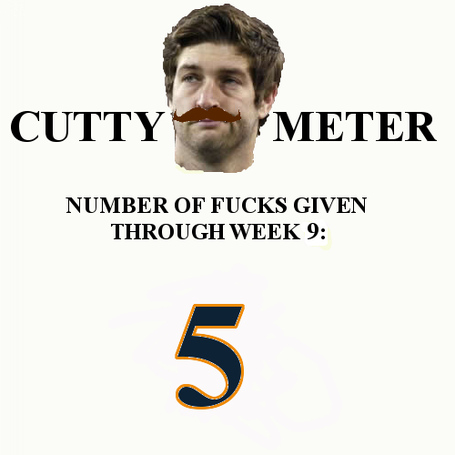 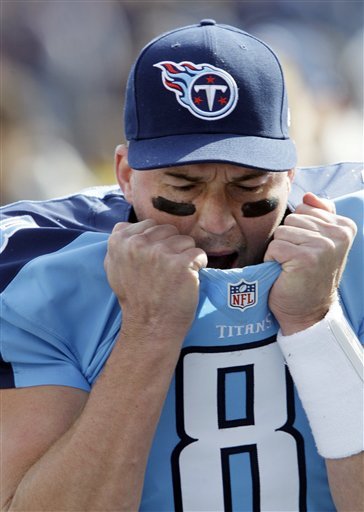 At some point in all of our lives, anger has morphed us into completely irrational human beings. For example, we punched a hole in our closet door because the Wisconsin Badgers had just lost a second straight Rose Bowl and the closet door happened to be in front of us when Russell Wilson spiked the ball with no time remaining. It's a common problem, the transfer of anger onto inanimate objects.

Titans' quarterback Matt Hasselbeck is caught here in one of those moments. His #8 jersey did not fumble the ball once in their 51-20 loss. That anger should instead have been directed at Chris Johnson, but it would have been nowhere near as funny-looking that way.

During the Giants-Steelers game, CBS was whoring their 60 Minutes interview with Aaron Rodgers. They showed a snippet of the interview and Rodgers said something like, "I love playing this position. I get off on being in control." Whoa there, CBS. A bit kinky for your viewership, no?