How Jay Cutler won over the Internet

Chicago Bears quarterback Jay Cutler turned into an Internet hero this week after he was unjustly ripped by ESPN's Tom Jackson. But is Cutler being built up because of his own merits, or being used as a symbol in the crusade against ESPN?

Share All sharing options for: How Jay Cutler won over the Internet

Before Jay Cutler would lead the Bears to a gory 28-10 victory over the Vikings at Soldier Field on Sunday, before he would return from a concussion to deliver Chicago a critical must-win game, the Bears' polarizing quarterback was already destined to have his character chopped and screwed by anyone with an opinion. This isn't entirely new for Cutler, or for Chicago. Ever since he strong-armed his way out of Denver after hearing about coach Josh McDaniels' supposed interest in then free agent quarterback and current league-wide laughingstock Matt Cassel, Cutler has become an easy target for the sort of missplaced moral hand-wringing annoying enough to induce a mild anxiety attack. You've heard it all before: Jay Cutler frowns too much, he isn't gracious with the media, he's temperamental, maybe even petulant. All of this rushed to the surface once more on Sunday unbeknownst to Cutler and his Bears teammates. While they were getting ready to play football, Cutler's disposition was again about to reach the national discourse.

It would feel like piling on at this point to put ESPN's Tom Jackson on blast for his pregame comments about Cutler, so let's just stick to the facts. "Sunday NFL Countdown" showed a quick clip of Cutler as he walked through the players' parking lot at Soldier Field to tease a look at the upcoming Bears-Vikings game. After a few minutes of the same nauseating analysis these shows typically provide, Jackson circled back to the seemingly innocuous clip of Cutler's entrance. He went on: "Before I pass this on, I just see it. Jay Cutler walks in in that arrival, he's passing by people who he sees every single week outside that locker room door, and he doesn't say a word to them. It doesn't mean anything, it's just something."

It's the sort of moment that could easily pass without a firestorm, without Cutler turning into a symbol for the crusade against Jackson or ESPN, but Deadspin wasn't about to let that happen. Deadspin captured the video and turned this into a story. Sean Newell ripped into the subject just minutes after kickoff at Soldier Field. His words:

Tom Jackson—an authoritative voice presented by ESPN—is no different than one of those body language experts in US Weekly talking about how Brad Pitt is getting divorced because some paparazzo caught him slouching. This kind of stuff is going on all the time and it becomes, like, a real storyline. It gets discussed on sports radio, broken down on message boards and referenced by columnists and beat writers alike. It is absolutely dumbing down sports discourse and it's coming from the top down.

As the game would unfurl, Cutler only added more fuel to each side of the fire. His performance was tough and gutsy, though far from perfect. A week before, the Bears were DOA in San Francisco as Cutler rested his soggy brain against the 49ers. Against a far more vulnerable Vikings defense, Cutler did what he had to do: he finished 23-for-31 for 188 yards with one touchdown and one interception, good for a very respectable QB Rating of 86.5. He also left a pair of indelible moments: earning a taunting penalty in the first quarter for flipping the ball to Minnesota's A.J. Jefferson after a first down scramble and then tying the shoe of J'Marcus Webb, the unfit blindside protector who Cutler tore into after a Week 2 loss to the Packers. Factor in that a loss would have dropped these Bears to the third in the division (with the win, they're now in first) and the current charged climate revolving around head trauma and player safety, and Cutler's effort could maybe fit the loose definition of sports heroism.

The next day, Deadspin would say exactly that.

Jay Cutler: The Antihero Who Looks A Lot Like A Hero

Just the headline alone is enough to get any web-savvy Bears fan all hot and bothered, and why not. Cutler is viewed as highly unlikable by opposing fans all around football, but Chicago loves him. The city's love affair with our quarterback is even a bit comical. The criticism Cutler receives isn't entirely unwarranted -- it's difficult to defend him after some of those four-interception games -- but Chicago views its QB with blinders. We've just had it so much worse. The best quarterback in franchise history, Sid Luckman, threw his first pass in 1939. Ever since Jim McMahon ended his injury-plagued run in Chicago, the Bears' quarterback situation has been the league's most pathetic. My SB Nation cohorts recently named the 2004 Bears as the 'saddest quarterback controversy' ever, with Chad Hutchinson, Craig Krenzel, Rex Grossman and Johnathan Quinn vying for snaps. As someone who lived through it, I can agree: that was rock bottom. But what's more, 2004 was nothing special, only par for the course. We could have chose the 2000 Bears (Cade McNown, Shane Matthews, Jim Miller), the 2002 Bears (Miller, Chris Chandler and the immortal Henry Burris) or 2003 (Kordell Stewart(!), Chandler, Rex) just as easily. Save a couple solid seasons from Erik Kramer, the '90s were just as bad.

So Tom Ley's love letter to Cutty at Deadspin, with mixed in video of a couple highly impressive throws vs. Minnesota, was custom built to spread like wildfire throughout this city. With over 43,000 views and over 1,700 Facebook shares, it looks like Deadspin accomplished its mission. It turned Jackson's comments into a viral phenomenon, got another opportunity to tear into ESPN, and raked in the pageviews. It's easy to feel like this was more about ESPN than Cutler. Still, Ley was more than willing to play into Chicago's hand and treat the Bears' QB like a savior, like an action star.

Cutler does stuff like this all the time, and yet we are stuck having to listen to arguments about whether or not he "gets it" (oh he gets it all right), about whether or not he "knows how to be a leader"—this in a league that reckons Ryan Lindley a viable starting quarterback. Cris Carter felt comfortable referring to Cutler as a mere game manager in this bit of postgame analysis. Managing the game? Fuck that. Cutler returned to a Bears team that had been blown out the previous week and turned it into a football team worth watching. He was the game.

Awful Announcing would take it a step further, opining about how Jackson's comments fit neatly into prepackaged narratives and how these narratives, while holding a small bit of truth, quickly get twisted and become unfair. Chicago passed that post around, too. Praising Jay Cutler and ripping ESPN is a strong formula for success. 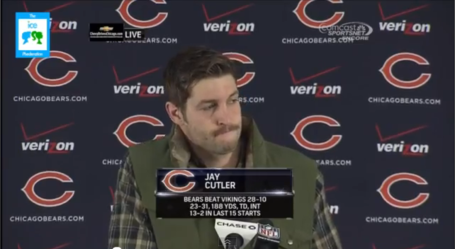 It's true, like any Bears fan tortured for their entire life by under-thrown post patterns, I have a very high opinion of Cutler. He makes Bears football watchable, and that is the greatest gift of all. It's something I never take for granted. Though he's still considered a bit of a prick, Cutler has been able to put one narrative to rest in recent years: the one that questioned his toughness. The same calls from peers and analysts directed at Cutler ever since he exited the 2011 NFC Championship game with a knee injury have largely dissipated. He's now viewed as one of the NFL's tougher players, a guy who has taken a beating behind the worst offensive line in football over the last four years but keeps getting up.

To think: up until the Bears' 7-3 start last season, the trade that brought him here -- with two first round picks and Kyle Orton going to Denver -- was still debated in some circles. Please. I would do that trade again 100 times out of 100 and would include plenty more assets if it came down to it. That's how important a good quarterback is.

It's just a bit curious to the degree of which Cutler has been fawned over. Yes: he gets a bad rap from people like Jackson, but any football fan worth their salt knows what Jay Cutler is at this point. Bill Barnwell nailed it months ago: he's an uneven quarterback who will give you bad with the good, someone who's never going to be one of the league's top three or five quarterbacks. Cutler is very good, not great, and it would be foolish to think another four interception game can never happen again. It will, just hopefully not in the playoffs. For Chicago's sake and for Cutler's.

After so much talk about narratives by Deadspin and Awful Announcing, they've created their very own alternate one. Now Cutler is the slighted warrior, the badass who doesn't get the respect he deserves from the haughty mainstream media. I just wonder: are we knighting Cutler because of who he is, or because of what he represents?

Cutler is far from perfect, and truth be told, has to play better. His performance on Sunday vs. the Vikings was very good, but the Bears have never had trouble with middling opponents. For Cutler to justify this alternate reality, he'll have to be a 'hero' vs. the Packers, Giants or Falcons, not against the Titans or Vikings. Through all of this recent discourse, Jay Cutler hasn't changed. This is the hazard of the around-the-clock news cycle and a symptom of multiple agendas at play. Cutler is still the erratic, tough-as-nails gunslinger he was a month ago. Just because someone with a big platform said something stupid about him doesn't change him, for better or for worse.