Chicago Bears fan who loaned D.J. Moore a TV in Bourbonnais wants you to know it's been returned

The Bears fan who lent D.J. Moore a TV in training camp hit me up on Twitter after a bad joke. He wants you to know his TV has been returned.

Share All sharing options for: Chicago Bears fan who loaned D.J. Moore a TV in Bourbonnais wants you to know it's been returned

Yeah, you read that headline correctly. There's a lot to get to here, so let's just roll with the facts.

Sources say D.J. Moore is inactive because he never returned that dude's TV in Bourbonnais.

This was a joke, maybe a bad one, but isn't that what Twitter is for? Twitter is for the jokes that would get you booed off stage. And yes, I saw someone tweet that a few weeks ago.

Like almost everything on Twitter, this was sent out to the world with little thought. I didn't even contemplate that it would have possible repercussions. Ohhh, but there were repercussions.

After the thorough ass-kicking at the hands of the 49ers finally ended, I powered down and tried to forget what I had just witnessed. But before going to bed, I checked Twitter one last time. I found this:

Dude if u don't know PLEASE don't talk!! I hope u RT it so all ur followers know u a liar @sbn_ricky He sign it too. twitter.com/Bearfan4ever00… 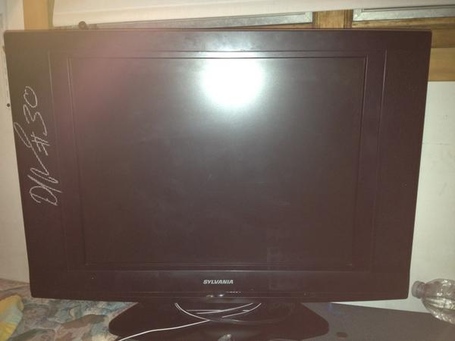 Ha! So there: Moore did give back the TV, and this dude has the autograph to prove it. I have no doubt this man is a huge Bears fan, because his handle is @Bearfan4ever001 but also because his Twitter avatar is a picture of him and Chris Williams.

[Ed. note: Mr. Delgado has chimed in to say it's actually Lance Briggs in his picture. My bad.]

And now u know I'm a liar. Or just bad at making jokes.