The Bear Trap has been promoted to clipboard holder. Our handwriting is not legible.

So submit to the safe hands of The Bear Trap. Some call us the original underneath route.

Tim Jennings Honorary Game Ball - This week's Tim Jennings Honorary Game Ball goes to the irrefutable Tim Jennings. Most Bears games have presented us with a litany of options for this prestigious Internet award. Not this week. Jennings was the ray of sunshine on an otherwise dreary day, the rose that grew from concrete, the honey from the thorn, and so on. His two interceptions give him 8 on the year -- more than 15 NFL teams.

A special distinction to the weather. People, out of habit, assume the adverse weather conditions automatically favor the Bears because CHICAGO FOOTBALL TRADITION. That's not necessarily the case anymore now that the Bears aren't trying to run the ball 40 times per game. The Texans, who play their home games in a dome, were praised endlessly for dealing with the weather. That's all well and good, but just because the Texans won't play in as many of these games as the Bears, doesn't mean they aren't better equipped to win them.

The Optimist's Take - Everything that could have gone wrong pretty much did. Kellen Davis and Michael Bush coughed up the ball on the first two drives of the game, thereby killing any chance to take control of the game early. Cutler threw his customary two interceptions before being knocked out with a concussion. Jason Campbell can complete a hell of an underneath route, which should come in handy outside of the 2-minute offense. The Bears turned the ball over 4 times and were without their starting quarterback for the second half, and still were in position to win this game. To take a page out of the Packers' book, "We beat ourselves." That's what you tell yourself when you root for an elite team, No one can beat us. Only WE can beat us and maybe GOD.

Another positive note: J.J. Watt did not swat 8 passes and set the single-game sack record, as we predicted he would a couple weeks ago. Carimi and friends did a pretty good job of limiting Watt. In fact, the Bears did not give up a sack all game. This is kind of a misleading stat, however, when you remember that Cutler was under so much pressure early on, he became the team's leading rusher out of necessity. He also suffered his concussion while scrambling out of the pocket.

The Pessimist's Take - We've been trying to tell you all year that the Bears are not a very good team when the defense doesn't score for them. Lo and behold, the defense doesn't score for them and they don't have enough to beat an elite team at home. It could have been worse. The Bears still forced two turnovers. TWO! That's not below average or even normal. Most teams have to play with less than two takeaways every game. Those teams find ways to win, why can't the Bears? You can dwell on the fact Cutler missed the second half. You can use his injury as an excuse for why the Bears didn't win. Or you can look at the game objectively and acknowledge that Cutler and the offense played like shit in the first half. There was no drop off with Campbell in there. You don't have to worry about Campbell turning the ball over every time he drops back to throw.

We'd like to kindly point out that the Bears have faced two, count 'em, two elite teams this year. They've lost both games. The Bears are probably not going to miss the playoffs, but with their upcoming schedule, you can kiss the division crown goodbye.

NO. The Bears are going to San Francisco to play in front of a raucous crowd still drunk off the Giants' championship. Jason Campbell versus Colin Kaepernick in a pivotal contest between two teams jockeying for NFC playoff positioning. ARE YOU NOT EXCITED?!?!

This Week's Adjective To Describe Jay Cutler - Forgetful. By no means are we trying to make light of a very serious concussion. We're just saying it may be better if Cutler has no recollection of this game. Don't even show him the tape. Nothing to see here. Let's move on.

Number Of Fucks Given - Even with only half a game to work with, Cutty managed to give one fuck this week for a total of 6 on the year. He does this because he loves you, people. Third down and he swings the ball out to Devin Hester. Hester isn't known for embracing contact, but in this situation, he would have been best served lowering his shoulder into the defensive back to pick up the extra yard needed for a first down. Instead, Hester danced around, the way he's prone to do on punt returns, and was tackled a yard short of the sticks. Cutty threw his arms up, exasperated, with the exact same expression fixed on his face as you see below. 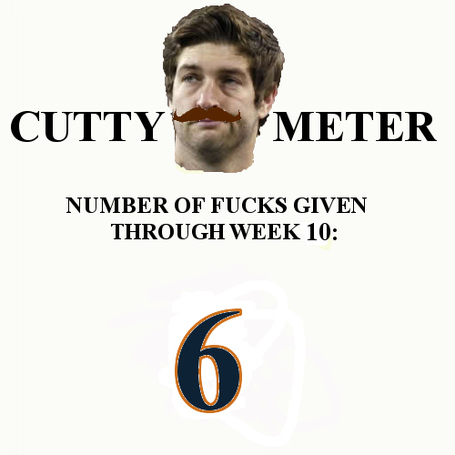 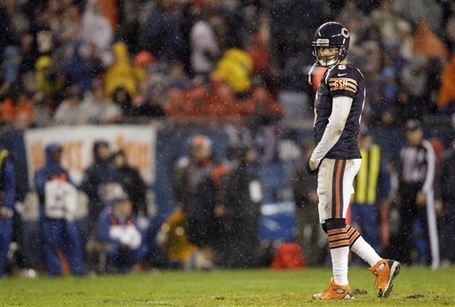 Forlorn main character walks down an empty street with his hands jammed in his pockets. It is pouring rain. The rain drips down our protagonist's face and serves as a convoluted metaphor. Our protagonist turns around to face the camera and utters the most cliche-ridden line you've heard in the history of cinema. This is the last scene of the worst movie you've seen this year. To make matters worse, this movie drew rave reviews, and was supposed to be a coming out party of sorts for the grizzled, promising director. You will be skeptical of his future projects from this point forward.

Clay Matthews didn't even know there were cameras present. They had to edit out the body bronzing footage and performance enhancing drugs scattered across the table. And by the way, the words "Just a real hot pic" should never come out of the mouth of anyone who isn't a 13-year-old girl.