Causing turnovers has been the primary goal of Lovie Smith's Cover-2 defense for nine years in Chicago -- a modern miracle of sustainability by contemporary league standards. It's testament to the strength of Smith's signature scheme and its application that the Bears' defense in 2012 doesn't look much different from ones under Smith's direction in the early part of his Bears' tenure. Where there was once Mike Brown returning interceptions for touchdowns, there is now Major Wright. Tommie Harris once fueled the defense to a Super Bowl run by mastering the critical three-technique defensive tackle position, a slot now admirably manned by Henry Melton. Much of the credit for the continuity of course belongs to Brian Urlacher, Lance Briggs and Charles Tillman, a trio of present day franchise icons who have been around since Dick Jauron was the boss. But the point remains: the Bears haven't been doing much different during their 4-1 start this season than they've been doing for the last decade.

Still, something feels fresh this year. Smith's ideals remain the same, but the Bears' execution has never been better. As Lance Briggs scampered into the end zone in the fourth quarter on Sunday to officially place the 'blow out' tag on a 41-3 victory over the lowly Jaguars, the Bears made two kinds of history: a) Briggs and Tillman became the first set of teammates ever to have a pick-six in consecutive games, and b) Chicago became to first NFL team to ever return five interceptions for touchdowns through the first five weeks of the season.

As the Bears continue to lay waste to every opponent, a natural debate has started to take place: is this defense better than the one that fueled the Bears to Super Bowl XLI? It's a worthwhile question to ask, but the Bears' cupcake-infused schedule thus far -- namely: wins over the Colts, Rams and Jags, three teams that could be choosing in the top ten of the 2013 draft -- has me thinking it's best to hold off on such talk for now. If these Bears really are better than they were in 2006, they'll prove it the rest of the way. One thing is already certain, though: when judged against the other dominant defenses of the day, the Bears are unparalleled.

The San Francisco 49ers have been said to be impenetrable; a staunch defense led by J.J. Watt has also powered an undefeated start for the Houston Texans. But according to Football Outsiders, the Bears' D has been best in the league so far and is projected to only get better.

Football Outsiders uses two of their own statistics to gauge success: DVOA and DAVE. DVOA chronicles what's happened so far, DAVE is described as "a formula which combines our preseason projection with current DVOA to get a more accurate forecast of how a team will play the rest of the season."

I'll defer to Football Outsiders for an explanation of DVOA:

DVOA measures not just yardage, but yardage towards a first down: Five yards on third-and-4 are worth more than five yards on first-and-10 and much more than five yards on third-and-12. Red zone plays are worth more than other plays. Performance is also adjusted for the quality of the opponent. DVOA is a percentage, so a team with a DVOA of 10.0% is 10 percent better than the average team, and a quarterback with a DVOA of -20.0% is 20 percent worse than the average quarterback. Because DVOA measures scoring, defenses are better when they are negative

Makes sense, right? So far, the Bears are essentially blowing away the field.

Football Outsiders' statistics are only updated through Week 4, so Chicago's two-touchdown, three takeaway effort vs. Jacksonville isn't even accounted for yet. Still, you can get good idea of how the Bears stack up: they're first in DVOA at -24.8%. Football Outsiders doesn't see the success as a fluke: the Bears also lead in DAVE at -20.6%.

The defense has remained remarkably healthy through five games, a trend that will have to continue if the Bears are to be this good all season. They don't boast great depth, particularly at linebacker. But what's in stone is that the Bears have been 25% better than your average NFL defense entering the bye. That's significant. Even when Chicago finished No. 1 last season in FO's weighted defense statistic, they were 17% better than average. The stuff the Bears have done this year has been pretty crazy.

Don't rush to historical judgments just yet, but appreciate what you're seeing.

2. ESPN Radio's "The Jay Cutler Show" isn't so much an attempt to humanize the Bears' quarterback as it is an opportunity to get him on his own terms, but the weekly segment with Mark Silverman and former Bear Tom Waddle has become something close to appointment listening for local audiences. As Cutler's up-and-down play has continued through the Bears' 4-1 start, the show survives as an inescapable part of the job for Cutler. We know Cutler isn't the most gregarious guy in the world and likely doesn't think too highly of the media. Still: there's no way for Cutler to duck his radio duty no matter how things went the game before. Silverman and Waddle do a good job of dictating the conversation even after rough games, like the Bears' Week 2 loss in Green Bay when Cutler threw four interceptions and became a national lightning rod for criticism.

Since the debacle at Lambeau, though, it's been all good times for Cutler and the Bears, and the show has reflected that. On Monday, Cutler's favorite target, wide receiver Brandon Marshall, popped in unexpectedly to share some unknown insights about his quarterback.

Something Chicago doesn't knows about Cutler, according to Marshall: "He grows tomatoes. It was weird, I met him at his condo one day and he had a whole little garden in his house. I didn't know that about him."

If "The Jay Cutler Show" remains this light-hearted the rest of the season, the Bears will be on their way to accomplishing some serious things.

3. Completely devoid of context, this tweet from embattled left tackle J'Marcus Webb made me laugh on Monday:

There's nothing on Webb's Facebook or Twitter page that gives any background on the comment, but the thought of Cutler showing up anywhere in a J'Marcus Webb t-shirt is comedy gold by itself. Just look at this thing: 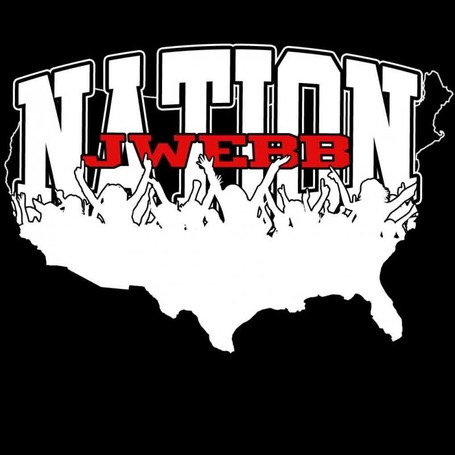 And it can be yours for the low price of $30! Best of all, you can a personalized shout-out on Webb's Facebook page, which is funny. T-shirt description:

Sizes go from small to 4XL. Women's sizes go up to 2XL. Get 'em while you still can!