The Bear Trap was fishing for the Cheetos we dropped in the couch and pulled out 38 straight points. Things are looking up.

Share All sharing options for: The Bear Trap, Week 5: Bears vs. Jaguars

So submit to the all-powerful claws of The Bear Trap. The Bear Trap is fun for the whole family. Not suitable for children under 12. First half not included.

Tim Jennings Honorary Game Ball - For a second straight week, a number of Bears deserved the Tim Jennings Honorary Game Ball. Brandon Marshall, last week's winner, does not win this week despite putting up better numbers. Lance Briggs returned his second interception for a touchdown in as many games and does not receive the award this week. Corey Wootton made it his personal mission to meet Blaine Gabbert in the backfield -- with a razor in his left hand and clippers in his right -- only to find out Gabbert had already shaved off his golden locks. Wootton does not secure the award for his well-intentioned effort this week. This week's winner is Charles Tillman. Peanut, you'll remember, picked off Tony Romo to open the flood gates against Dallas. This week, after the Bears settled for a disappointing field goal after a 17-play drive that lasted over 9 minutes, Tillman returned an interception to put the Bears up 10. The Bears followed Tillman's pick-6 with 28 unanswered points. If you believe in buzzwords like "spark" and "momentum" then Tillman is the obvious choice for his game-changing play.

The Optimist's Take - The first half happened. There's no getting around it. Both teams basically took turns piecing together time-consuming drives with 3-and-outs before punting the ball away. Talent won out in the second half. The turnovers finally came -- two interceptions and a fumble from Gabbert, who had only turned the ball over two times in the previous four games. Drives ended in touchdowns instead of field goals. Our defense stonewalled MJD, 56 yards on 12 carries, 47 of those yards on two runs. Conversely; Forte, Bush, and even Armando Allen ran wild over the porous Jags defense. We executed our game plan almost to perfection, it just took a little longer than expected.

The Pessimist's Take - OK, at this point it would be naive to not expect the Bears to force turnovers. While turnover numbers, for the most part, are luck-based and fluctuate from year to year, the Bears' coaching staff emphasizes turnovers, and the team is pretty damn good at forcing them. But two defensive touchdowns, though? Eventually their good fortune will run out. And when that happens, the onus will be on the offense to pick up the slack. A sluggish first half against the elite teams coming up on the schedule will likely result in a double digit deficit. Then comes Cutler trying to force the ball down the field in obvious passing situations. We've seen this movie multiple times before. This movie is Freddy Got Fingered and it's the worst.

YES. The Bears are going to spend their bye week simulating Madden seasons until the Bears win the Super Bowl. They're also going to trade Aaron Rodgers to the Browns for three 1st rounders because those who will not risk cannot win.

This Week's Adjective To Describe Jay Cutler - Inconspicuous. So much happened in this game, and yet, Cutler didn't seem to be in the middle of any of it. Between the defense scoring points, Devin Hester making an improbable diving catch, and Brandon Marshall catching everything, the focus was not on Cutler for the first time all season. Even his interception was quickly swept under the rug after the defense promptly forced a punt. Cutler won't likely coast under the radar for long, so we'd advise him to enjoy it while it lasts.

Number Of Fucks Given:

Jay Cutler on Former QB/Current Fox Analyst Terry Bradshaw, "I'd like to give a fuck but right now I have none to give. Shut up, old man."

0 fucks given this week for a paltry total of 1 on the year. In fact, Cutler was caught fist-bumping Mike Tice and grinning from ear to ear at the end of the game. A misunderstanding, most likely. 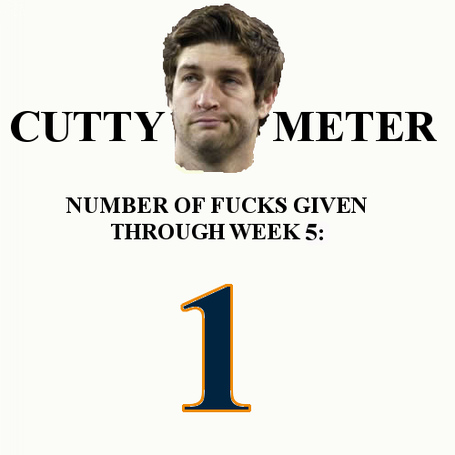 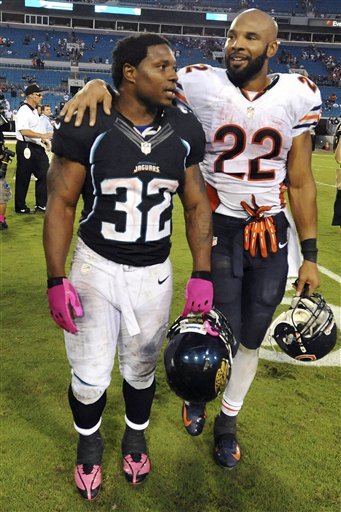 NFL players are subjected to the same insufferable commercials we are. So it's no surprise that Donald Brown, after scoring the two-point conversion to clinch the comeback win over the Packers, decided to mock that stupid ass State Farm commercial starring Aaron Rodgers AND BJ Raji. This is great because Donald Brown went from being a completely useless player just last year, to ushering in the season's newest movement this year.

Look, the Packers season is over. The losses are going to start piling up along with players mocking all these commercials. I can see it now. Percy Harvin takes a 62-yard reverse to the house, throws a high school cheerleader on his back, and busts out ten quick push-ups in the Lambeau end zone. Jason Hanson hits a game-winning 49-yard field goal and Ndamukong Suh stakes out Clay Matthews on the sideline, "I WILL EAT YOU!"

An exasperated Mike McCarthy bans all players from filming commercials and the world is a much better place without having the Packers crammed down our throats every TV timeout.