Points? The Bear Trap has no use for them. We measure excellence in turnovers.

Welcome to The Bear Trap, a weekly look at the Bears game that was. In this space, we will deal with the most pressing issues surrounding the Bears and their previous game. We'll favor overreaction, both positive and negative, to fair, balanced analysis. We'll ask if the Bears should withhold the Super Bowl Shuffle 2012 music video and if Brandon Marshall's erratic off-field behavior has derailed the season yet. We'll wonder if Jay Cutler is best described as aloof or super-duper aloof, and tally the number of fucks the notorious Shoulder Shrug has given up to this point. All that, plus some old fashioned Packer hate. We'll keep it lighthearted as long as it's understood the hate is real and comes from a dark place.

So submit to the reliable hands of The Bear Trap. The Bear Trap does not appreciate your pre-planned touchdown celebration, Nate Burleson. One broken leg for you.

Tim Jennings Honorary Game Ball - For the second straight game, this week's Tim Jennings Memorial Game Ball goes to Charles Tillman. He held Calvin Johnson, who pretty clearly is THE Lions offense, to only three catches for 34 yards. His pass break-up in the end zone was godly, and he also managed to force two fumbles on the same drive from perpetual fantasy disappointment Brandon Pettigrew. Pettigrew has fumbled enough in his career to know that he can only catch balls near the sideline, lest he turn the ball over. There's not much more to say. If Tillman wins this prestigious Internet award again next week, we'll have to consider renaming the award in his honor.

The Optimist's Take - What's not to like about this defense right now? Four more turnovers to add to the pile, held the Lions to 4-13 on third down, and limited the run game without putting any emphasis on stopping the run. Every lead feels like a big lead when this defense is on the field. It's amazing to think this game was decided by a touchdown and came down to an onside kick.

Don't look now, but the left side of the O-Line isn't something to worry about anymore. Well, at least until J.J. Watt lines up on the other side of the ball. We would much rather the weak link be Gabe Carimi right now because at least with Carimi, we get the feeling there's a chance of him figuring it out (and he isn't protecting Cutler's blind side, which is nice). The offense was stagnant in the second half mostly because of Cutler's rib injury. He had trouble throwing to his left and the play calling remained pretty vanilla as a result. He'll get healthy and the offense will look inspired next week.

The Pessimist's Take - Where to start with this Lions team? How about with their offense, which is dog shit. They waited again until the 4th quarter to do all their scoring -- one whole touchdown. The Bears invited them to run for five yards every carry, they did, and then inexplicably trusted Stafford to do the rest. He didn't. Matthew Stafford isn't a very good quarterback when he doesn't have Calvin Johnson to throw to, folks. The Bears could afford to double Johnson because none of the other Lions receivers were a threat to beat them.

And the turnovers. Oh, the turnovers. Who does Joique Bell think he is trying to jump into the end zone from the 4-yard line? Stefan Logan cannot handle a punt properly. These are unforced errors, stupid mental mistakes that should have been avoided. All four turnovers either took points off the board or resulted in points for the Bears. The Lions get ahold of the Stickum the Chargers were using and they win this game.

Jay Cutler's injury is more serious than he and the team are letting on. Season Over.

YES. But first the Bears are going to Miami to take on Alabama in the BCS National Championship game. Both teams will combine for 69 total yards of offense, 8 turnovers, and 36 concussions, much to the delight of Nick Saban and the entire Bears' fanbase.

This Week's Adjective To Describe Jay Cutler - Stout. Seemingly every week something happens to Cutler that allows every asshole on Twitter to sarcastically quip, "ZOMG! Look at the way he got right back up from having his head pile-driven into the ground. WHAT A PUSSY!!!" We get it. All those people who questioned his toughness were moronic, but no more moronic than bringing up Maurice Jones-Drew after every one of these hits. No reasonable person thinks Jay Cutler is soft, so we can stop pretending there are people worth acknowledging who do.

Number Of Fucks Given - Kellen Davis is so infuriating to us. For some reason, we expect him to make every catch, despite an overwhelming amount of game footage that says he won't. When Jay Cutler angrily ripped off his chinstrap and could muster nothing but a look of pure disgust after Davis dropped a would-be first down in the opening seconds of the 2nd quarter, we could relate all too well.

1 fuck given this week for a total of 2 on the year. Cutty's first fuck given since Week 2 against the Packers. Of course it was Kellen Davis who brought it out of him. 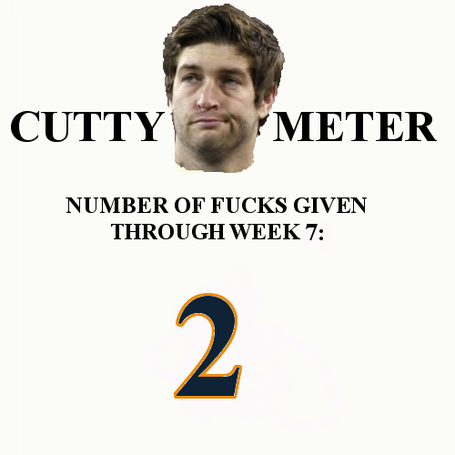 Pic Of The Game - Via @Neeshusss 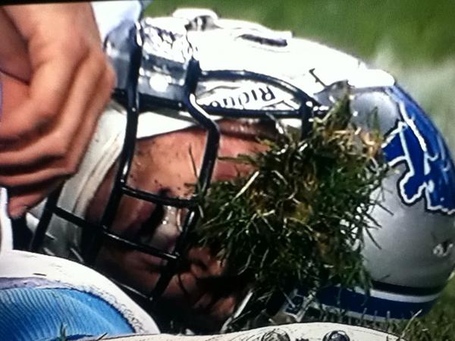 This is it, what my what my life has been reduced to. A symbol of failure. A splotch of turf, some of which has trickled into my open mouth and left a lingering taste. Specks remain visible on my face until the very end of the game. I long for my violin. When we competed, we did so to push each other artistically, to forward our craft. We weren't trying to kill each other. "You put down that dagum music thing right now," Daddy says. "Yes sir," I respond enthusiastically. "Son, you're going to play footbaw like a real man GO DAWGS!" I still remember how the violin felt rested on my shoulder.

Requisite Packer Hate - Packers fans are riding high after their little 30-20 win over the Rams. Do you remember what happened the last time the Packers and Rams played in the playoffs? We do and so does YouTube.

That's eight, count 'em, eight turnovers. And that's Brett Favre, the quarterback Packers fans would rather have seen die on the field than hand over the starting job to Aaron Rodgers. We haven't forgotten your fickleness. The Rams defensive coordinator this game? None other than Mr. Lovie Smith.