Share All sharing options for: The Bear Trap, Week 4: Bears vs. Cowboys

Welcome to The Bear Trap, a weekly look at the Bears game that was. In this space, we will deal with the most pressing issues surrounding the Bears and their previous game. We'll favor overreaction, both positive and negative, to fair, balanced analysis. We'll ask if the Bears should withhold planning the Super Bowl Shuffle 2012 music video and if Brandon Marshall's erratic off-field behavior has derailed the season yet. We'll wonder if Jay Cutler is best described as aloof or super-duper aloof, and tally the number of fucks the notorious Shoulder Shrug has given up to this point. All that, plus some old fashioned Packer hate. We'll keep it lighthearted as long as its understood the hate is real and comes from a dark place.

So submit to the hazy feeling that comes with the loss of two pints of blood from your left leg. The Bear Trap always hits low. Never an arm tackle that allows you to escape the pocket and zip a 20-yard pass over the middle. Mobility is overrated anyway.

Tim Jennings Honorary Game Ball - Brandon Marshall earns the Tim Jennings Honorary Game Ball this week, beating out a bevy of fine options. Marshall had no trouble gaining separation from Cowboys' lockdown corner Brandon Carr. He caught 7 of the 8 passes thrown his way for 138 yards. To put this performance in perspective, the rejuvenated Dallas defense had only allowed an average of 158 yards passing per game through Week 3. Marshall nearly matched that by himself. Marshall's last catch, a 31-yard touchdown, unfolded without a single defender within 10 yards of him. This was the moment Dallas finally realized they could avoid a humiliating cafeteria beatdown by just handing over their lunch money from the get-go.

The Optimist's Take - We forced 5 turnovers, 5 interceptions nonetheless, and scored 21 points off of those turnovers. Normally when our defense puts together such a stellar outing, the offense is just kind of there, sitting by idly, trying not to screw things up. That wasn't the case at all last night. Cutler and the offense moved the ball against a Top-2 defense. Receivers got open AND caught the balls that hit them in the hands. Forte provided a nice balance running the ball, despite his nagging ankle injury. Special distinction to J'Marcus Webb. He had some help from his backs and tight ends, but held up reasonably well one-on-one. He did allow the sack and forced fumble, but considering the constant big play threat from DeMarcus Ware, this seemed better than the possibility of more frequent, terrifying alternatives.

The Pessimist's Take - Bears fans should know better than any fan base what it feels like to watch your quarterback literally throw away the game. I mean, underneath the layers of hopelessness, it can be kind of cute. Like a young giraffe learning to walk, you can't believe they haven't given up yet. So don't read too far into last night's turnover bonanza. It had far more to do with Romo and his receivers than anything the Bears defense did. The first interception was the result of Dez Bryant running the wrong route. The second interception went right through Ogletree's hands, taking points off the board. The third interception-fumble hybrid was a play only Tony Romo could make. But remember, today it was a 74-yard Lance Briggs interception return for a touchdown. Tomorrow it will be a 74-yard shovel pass touchdown to DeMarco Murray. For every spectacularly goofy turnover, comes a jaw-droppingly impressive touchdown pass. Such is life with Tony Romo. The Bears caught him on one of his bad days.

YES. The Bears are going to spend $5,000 a week at the Cheesecake Factory. This lavish lifestyle might not last forever, but it will last for the remainder of the week. They're not too concerned with the JAGUARS, too busy in the Ferrari and Jaguar, switchin' four lanes, top down, screamin' out, "Money ain't a thang!"

This Week's Adjective to Describe Jay Cutler - Liberated. The book on Cutler is that, when given the time to throw, he is one of the elite quarterbacks in the league. The problem, of course, is that he has not received good protection for going on 4 years now with the Bears. That wasn't a problem Monday night. Cutler had all day in the pocket to survey the field and find the open receiver. He must feel liberated this morning. Free of a pass rush, free of the criticism that he can't perform on a national stage, free of Kristin -- well, at least for the weekend anyway.

Number of Fucks Given - Does this man look like he has a single fuck to give?

Nope. Not a one. 0 fucks given this week for a total of 1 on the year. REMINDER: The lesser number of fucks given the better. Cutler tends to give a fuck when things aren't going well. As a general rule, the less amount of fucks given, the more likely the Bears are to have played well this season. 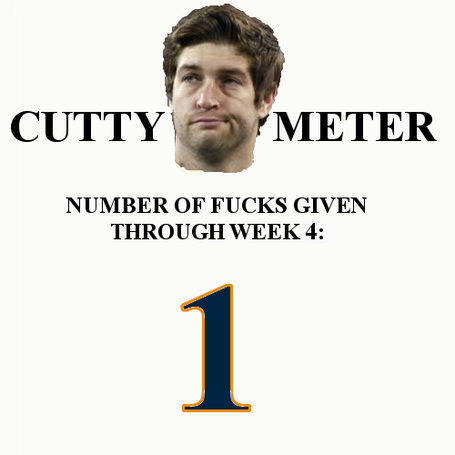 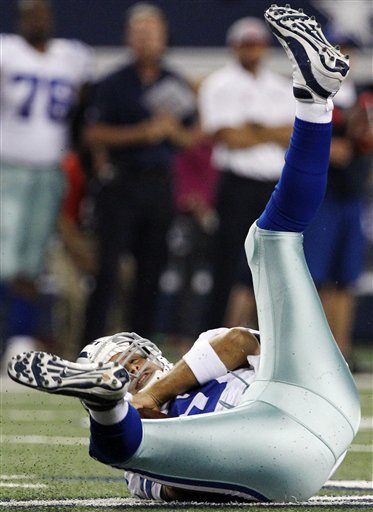 A trashier website would point out the similarities between the above Tony Romo photo and a subordinate sexual position. We here at SB Nation Chicago are far too classy to even mention such a thing. Instead, what we have here is what should have been Dallas' preferred offensive attack. Romo drops back five steps and falls onto his back. If nothing else, this strategy limits all the game-changing interceptions.

Packers fans have rediscovered their cockiness. I'm looking forward to Wilson and the Seahawks stripping it away. Hopefully in the most agonizing way possible.

Hoo Boy. "Agonizing" does not even begin to describe that loss. I'm not sure there's a word in the English language capable of describing that loss. What I do know is this: All NFL fans, while mustering up faux outrage on your behalf, were secretly laughing at you behind your back. We didn't care about the injustice done to YOU, or the integrity of the game. We were worried the same thing could happen to US. We retweeted TJ Lang, not because we admired his courage to take a stand, but because he had the nerve to suggest he and his band of human sieves were not at all responsible for the loss. We were laughing at that assertion.

But this is how you like it, right? Being dressed up as martyrs? We're all so thankful that the Packers, noble franchise they are, handled this travesty with such class. Just like we're jealous of your tradition, community ownership, and a town whose residents wait in line for hours to shovel snow out of Lambeau for minimum wage. Please. We laugh at how much pride you take in "Titletown, USA" -- a MADE UP TITLE. We'll laugh the loudest when the your loss to the Seahawks costs you a playoff spot.