The Bears Are Taking The Loss Of Olin Kreutz Pretty Hard

Share All sharing options for: The Bears Are Taking The Loss Of Olin Kreutz Pretty Hard

Coming off an encouraging trip to the NFC Championship Game and poised with nearly as much cap space as any team in the NFL, this seemed like a perfect off-season for the Bears to make a splash. They had done as much the previous two off-seasons, first with Jay Cutler and then Julius Peppers. While the Bears continue to struggle at identifying and acquiring talent through the draft, making major veteran acquisitions has been enough to keep the team successful, albeit still flawed. That's why it's such a bummer to see the Bears essentially sit on their hands and watch all of the impact free agents sign elsewhere. As evident by a poll in Bobby Loesch's post from last night, fans are not happy with the direction the team has taken thus far, when it would appear that a few pivotal changes could have the Bears again in position to challenge for a trip to the Super Bowl.

Adding insult to injury, the two moves the Bears have so far have been subtractions: Greg Olsen and Olin Kreutz, popular with teammates and fans alike, have been sent packing. It's only added to the negative publicity of an off-season that has Chicagoans turning pessimistic earlier than ever.

More troubling is how each move is playing in the locker room. The tight bond between Olsen and quarterback Jay Cutler is widely known. In the days since Kreutz and the team decided to go their separate ways over $500,000, several veterans have voiced their displeasure. 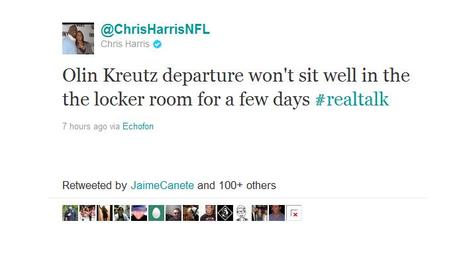 Anthony Adams and Caleb Hanie also mourned the loss of Kreutz on the social media site.

Most damning of all were these tweets from Fox Sports NFL reporter Jay Glazer. 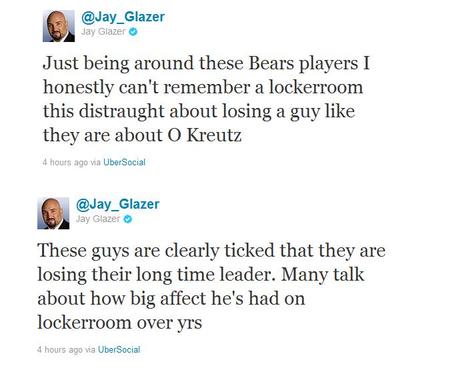 Shades of Kendrick Perkins, anyone? Too soon to tell, but it's more bad news in an off-season for Chicago that can only be called a disappointment.