Take a look at the picture in question, after the jump. 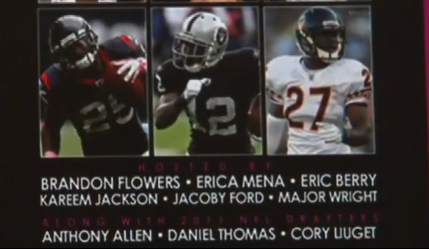 There are two schools of thought you can apply to this news if you want to have a positive outlook...

1) It's very possible these players had nothing to do with the ad: If you're the type of person to be offended by something like this, it's important to remember, events -- usually private parties at clubs or bars -- happen all the time in the *name* of pro athletes but without their actual consent. Remember the Derrick Rose all-star party advertisement? You don't? It's probably because he had nothing to do with it.

The only people who really should be up in arms about this are the people who appear to already be up in arms about this: the good folks at the NFL. Those dudes want to cultivate the image of squeaky clean, harmless players. Stuff like this does not help at all. With blind speculation, I'd say there's a solid chance Wright did consent to this based solely on the fact he's from Ft. Lauderdale. But then again, that's pretty irresponsible journalism.

If you're interested in attending, it appears to be in Rosemont, Ill., on July 8 through July 10. Here's the official site (NSFW, of course). It's billed as "The Largest Event In The U.S.A. Dedicated To Love And Sex."

All things considered, this probably isn't the last you'll here of the Exxxotica Expo 2011.

I want to set the record straight in reference to news reports on my involvement at an event that took place on May 20 in Miami, Fla., at Club Play. I authorized my name and likeness to be used in conjunction with other NFL players at a party I believed to be hosted by other NFL players. I had no knowledge and never would have given authority for my name or likeness to be associated with Exotica Expo 2011. I am deeply disappointed that my name and likeness was manipulated by the promoters of this event. The use of my picture in a Chicago Bear uniform was never discussed or approved. It is unfortunate that this incident has occurred and I would like to let the Bears organization, our fans, my teammates, family and friends know that I am truly sorry. I have learned a valuable lesson and will use more prudent judgement with people I associate myself with in the future.

Bobby Loesch is the associate editor of the Chicago sports blog Tremendous Upside Potential and a new daily contributor to SB Nation Chicago. Follow him on Twitter @bobbystompy.