Do you believe in the Sports Illustrated cover jinx? It doesn't seem possible that a simple magazine cover photo would do this, but athletes and teams that have been depicted on the cover have fallen victim to all sorts of bad things after they appear, from bad games to injuries to lost championships. And no city's teams have been more affected by these cover appearances than Chicago's.

When I saw this Jan. 24, 2011 cover of Sports Illustrated, which came out before the NFC Championship game, featuring Bears quarterback Jay Cutler, I knew the Bears were doomed. 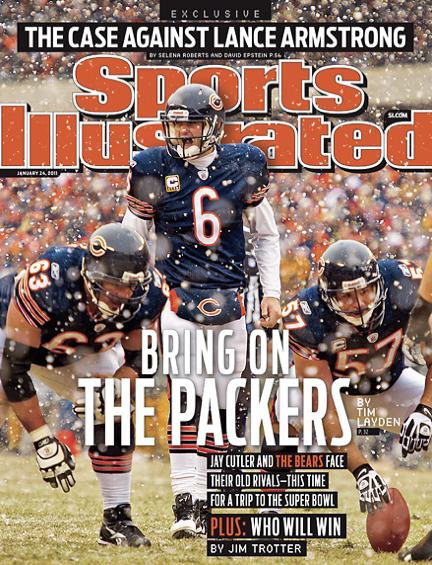 Why is that? Well, that's because of the well-known Sports Illustrated Cover Jinx. You may scoff at such a notion, but it's a well-known thing among sports fans. It may have even begun years before SI was created in 1954 -- this article mentions a "Time Magazine Cover Jinx" from the 1930s and 1940s (mostly connected with sports figures); Time, of course, is SI's corporate newsmagazine sibling. The jinx is so widely acknowledged, in fact, that SI itself published an article in January 2002 examining all the stories connected to the jinx, what teams and individuals it had supposedly tripped up, even up to and including the year before that article saw print:

The past year [2001] was a good one for the Jinx—or a bad one, if you happen to be Nomar Garciaparra of the Boston Red Sox. Days after Garciaparra appeared on the cover last spring, shirtless and mocking the fates, it was announced mat he had split a tendon in his right wrist. Oregon State, our preseason No. 1 on last fall's college football preview and featured on the cover in the person of running back Ken Simonton, lost 44-24 to Fresno State in its opener and finished 5-6. The run of Nebraska quarterback Eric Crouch for the Heisman Trophy, founded less on his statistics than on his having piloted the Cornhuskers to an 11-0, top-of-the-polls season, hit a speed bump the day after Thanksgiving, when Colorado obliterated them 62-36. The wipeout occurred just as subscribers were receiving the issue bearing his portrait. This season's billing of SKINS' GAME: HOW TO GO 0-5, THEN 5-0 all but assured that the Washington Redskins would lose to the Dallas Cowboys that week and then fail to make the playoffs—and led to a campaign by Pittsburgh TV and radio stations, after the Steelers landed on the cover the following week, to get listeners to boycott the issue and cancel their subscriptions.

Not only did the Bears lose the NFC Championship Game to the hated Packers, but Cutler missed almost the entire second half with a knee injury. Game, set, match: jinx! It's possible, however, that the jinxee was Cutler, not the entire Bears team; the two most recent Bears championship teams, in 1963 and the Super Bowl winners in 1985, were featured on the cover a combined five times during those title seasons without incident.

Thankfully for the Blackhawks, though, Sports Illustrated has almost completely ignored them in recent years as a cover subject -- and when the Hawks won the Stanley Cup last June, SI didn't put them on the cover until after they had won, for this June 21, 2010 cover. 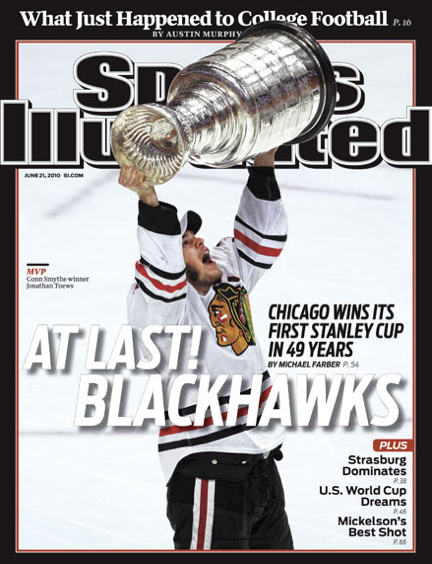 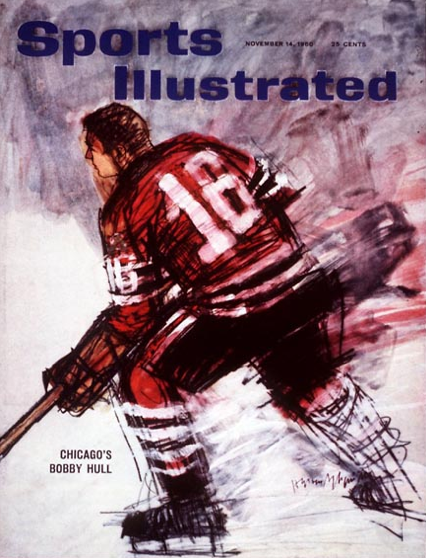 It got really bad in the 1970-71 season, an era when Tony Esposito was setting shutout records in goal for the Blackhawks. "Tony O" and his Boston Bruins brother Phil were featured on the cover on March 29, 1971, the final week of that year's NHL regular season: 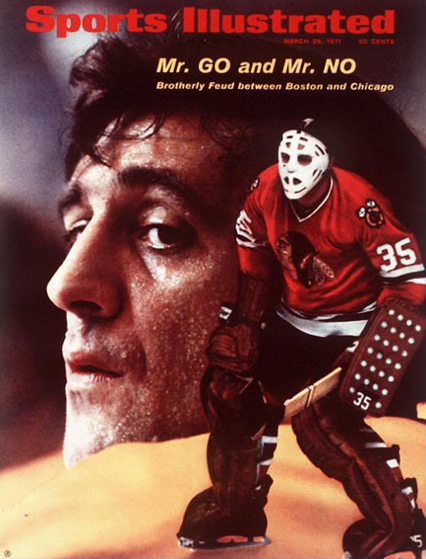 That, of course, was the year that the Blackhawks blew a three games to two lead in the Stanley Cup Finals against the Montreal Canadiens and a 2-0 second period lead in Game Seven and lost... their last really good shot at the Cup until last year. Incidentally, that cover jinxed the Bruins, too -- after winning the Stanley Cup the year before, they had the best regular season record in 1970-71, but lost their first-round playoff series to Montreal.

Meanwhile, anyone who saw this Sept. 29, 1959 World Series preview cover would have instantly realized that the White Sox were doomed: 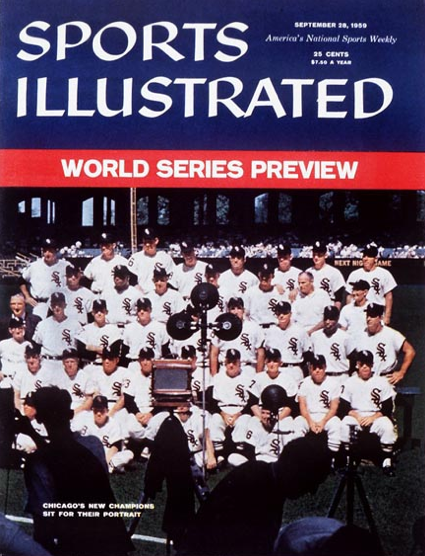 What, they couldn't have put the Dodgers on the cover? Or both teams, so as to not play favorites? The White Sox lost the '59 Series to the Dodgers, even though they came in with the best record in baseball. Thankfully for Sox fans, again, SI kept them off the cover in 2005 until after they had won World Series games One and Two -- Scott Podsednik's walkoff home run was the featured photo on the Oct. 31, 2005 cover. The jinx almost did the Sox in -- after that appeared, the Sox had to win a 14-inning game with a home run by Geoff Blum (his only postseason hit and only AB in the Series) and then a nail-biting 1-0 win that was saved by a great defensive play by Juan Uribe in Game Four in order to clinch the title. Next time, SI -- leave the White Sox off until after they've won a title, please. (The Astros were also featured on this cover; that may have blunted the effects of the jinx.) 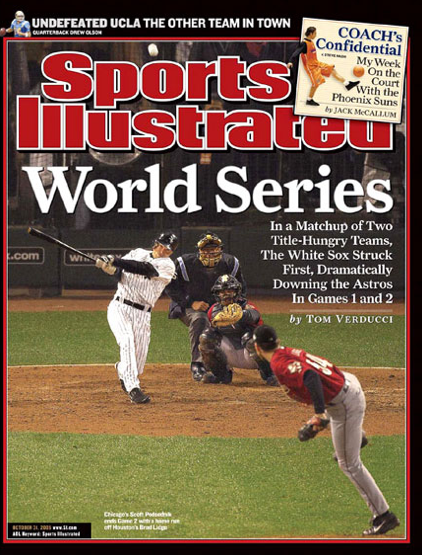 It's a different story with the Bulls. Perhaps the fact that Michael Jordan graced the cover of SI 49 times overwhelmed the effects of the jinx, and allowed the Bulls to win their six titles with him (and, of course, the fact that Jordan may be the best player in the history of the game). Below is Jordan's final appearance on an SI cover while he was still a Bull -- downing "The Shot" that defeated the Jazz for the sixth and final championship of his era, on the cover of the June 22, 1998 issue: 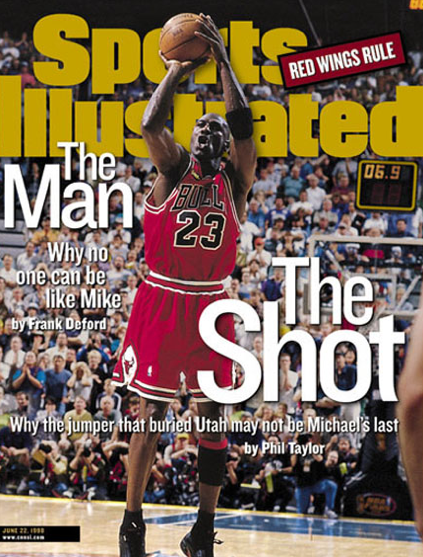 We'll finish this examination with the Cubs, who... as you might imagine... appear to have been more affected by the cover jinx than any other Chicago team (and maybe any team, period). Manager Leo Durocher appeared on an SI cover of Feb. 28, 1966 (after which the Cubs finished in 10th place with 103 losses), but no Cubs player appeared on a Sports Illustrated cover until June 30, 1969, when "The Raucous New Cubs" were headlined by Ron Santo: 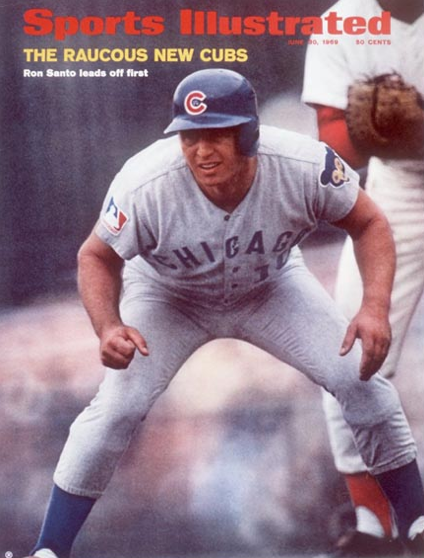 Within ten days after that appeared, Santo had gotten bad PR by reaming out teammate Don Young in the clubhouse after Young dropped a fly ball that gave the Mets a win over the Cubs at Shea Stadium. Santo was forced to call a press conference to apologize. Later that summer, the Sept. 8, 1969 issue featured the Reds' Pete Rose and the Cubs' Ernie Banks on a cover headlined "The Frantic National League." 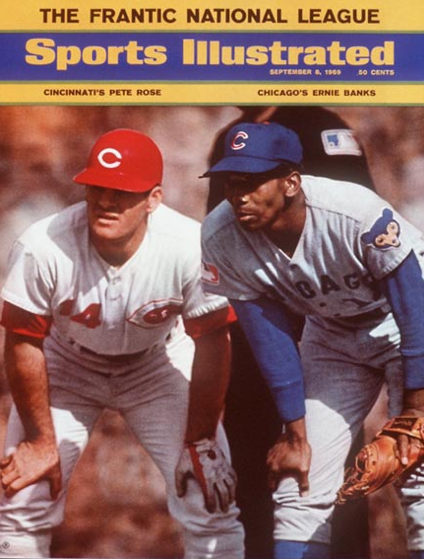 Thanks, SI. That was the week the Cubs fell out of first place for the first time all year with an eight-game losing streak, never to return. Not only that, the cover jinxed the Reds, too; on the cover date the Reds swept a doubleheader from the Giants to go half a game up in the NL West -- but then lost nine of 13 to fall to fourth place. They finished third.

The Cubs appeared on the cover a couple of times in 1984 (Leon Durham, one of the featured players, let a ball go under his glove in the playoffs, helping lead to a NLCS loss) and 2003 (Kerry Wood, featured on a cover that said "Do You Believe?", lost Game Seven of the NLCS). Then, this April 5, 2004 cover sealed the Cubs' fate for that season: 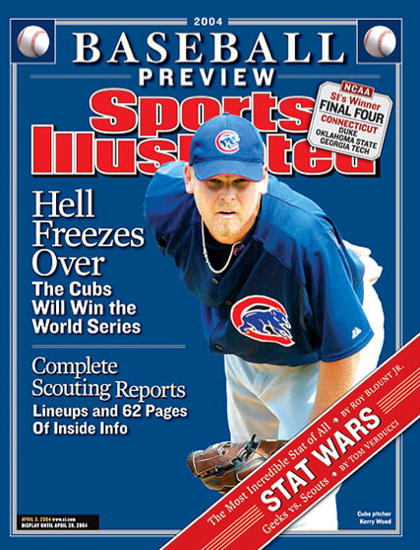 Really, SI? "The Cubs Will Win The World Series"? That was the year that the Cubs went into the final week of the regular season in the driver's seat for the NL wild card, but lost seven out of eight to fall out of contention and finish third. And Kerry Wood, again a cover subject, got hurt that year and didn't really come back full time until 2008... and speaking of 2008, this Sept. 29, 2008 cover featured Aramis Ramirez and the quote "If the Cubs win it all, I'll cry like a baby and laugh like a hyena for a week." 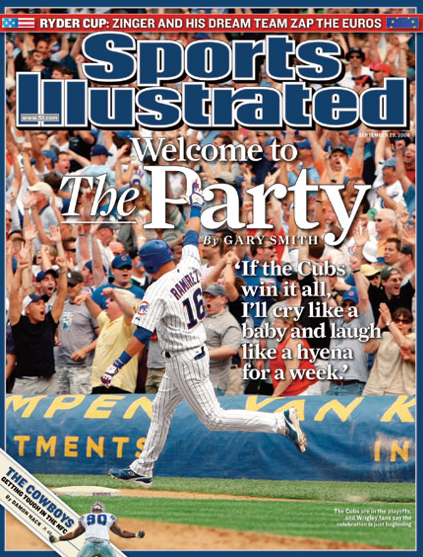 Not only did that cover feature the Cubs and say "Welcome To The Party", but there was a long feature article about the Cubs and Cubs fans (that "cry" and "laugh" quote was from one of the fans interviewed for the article). After a 97-win regular season, the Cubs were blown out by the Dodgers in three straight in their Division Series and if there was a "party", the Cubs' invitation got lost.

So please, Sports Illustrated. We're fine with it. Ignore our teams. Write articles about them if you want; feature our local players in profiles about the way they play... but keep 'em off the cover until after they win championships.