The Chicago Bears have struggled to find stability on the offensive line this season, but a look at some offensive line stats suggests that the most recent configuration gives them the best chance to succeed.

It would be pretty difficult to craft an argument that any iteration of the Chicago Bears offensive line has been good thus far in 2011. Well, I have the good sense to stay away from any such claim, but I do feel the most recent configuration has been the best option of any combination seen during the first seven games. Just to eliminate any confusion, I am speaking of the following starting five: LT- J’Marcus Webb, LG- Chris Williams, C- Roberto Garza, RG- Chris Spencer, RT- Lance Louis. This is the group that has been in place since Frank Omiyale was benched for terrible play during the second half of the Week 5 debacle against the Detroit Lions.

Even if I feel a bit more comfortable with those five men protecting QB Jay Cutler and carving running lanes for RB Matt Forte, it really seems like little more than a feeling in the end. Offensive line play can be difficult to accurately assess for a myriad of reasons. The relationship between the five men controlling the line of scrimmage for the offense is undeniably symbiotic. Excellence requires an intricate blend of technical execution, precise communication, and prescient diagnosis of defensive pressure concepts.

As fans and observers we aren’t privy to specific blocking assignments and schemes, but when an offensive line truly begins to coalesce it is clear to see: the quarterback has more time to make his reads, set his feet and throw, and the running back has an opportunity to reach the second level of defenders and make a move upfield. The same rules of observation also apply to terrible o-line units: everyone can see when the quarterback is constantly under pressure and the running back is forced to make defenders miss in the backfield just to get positive yardage.

The trouble comes in trying to find meaningful moments of offensive line play in the absence of extreme outcomes. It doesn’t take a pro scout to see that false-start machine Frank Omiyale isn’t fit to see an NFL field ever again. However, when it comes to the looming decision of whether to re-insert 2011 first-round draft pick Gabe Carimi into the lineup at RT (I am working under the assumption that he is suited only for RT in the NFL, based on prospect scouting reports like this one), it’s tough for any fan to make a serious suggestion.

My football sensibilities tell me that putting a rookie back on the field makes the line more vulnerable if only by virtue of the lack of professional experience for Carimi. The phrase "rookie mistake" exists for a reason, and most defensive coordinators love to send edge pressure against less experience tackles. Then again, Offensive Line Coach Mike Tice has recently spoken highly of Carimi, saying:

"Before he got hurt, I thought he was our best lineman. So I would have to think if he got back to that at any time, he is going to be back on the field."

It could be simple coach speak designed to keep the rookie working hard, but it could also be true. In an attempt to cut through the confusion and find some reasonable basis to evaluate my faith in the most recent iteration of the offensive line, I combed through some offensive line stats.

The basic story is not good. Over seven games, here is where the line stands:

Looking at rushing stats for the right side of the line (where the Carimi situation is most salient):

Taking a deeper look, I selected a set for a week-by-week visual breakdown, using the box scores from Advanced NFL Stats for the pass protection graph and ESPN play-by-play data for the rushing stats: 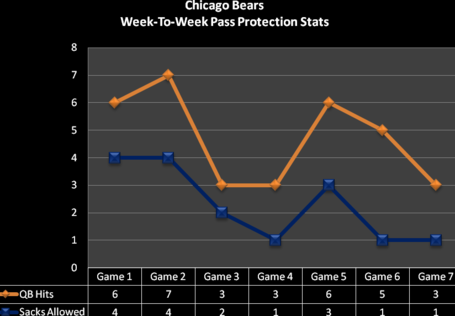 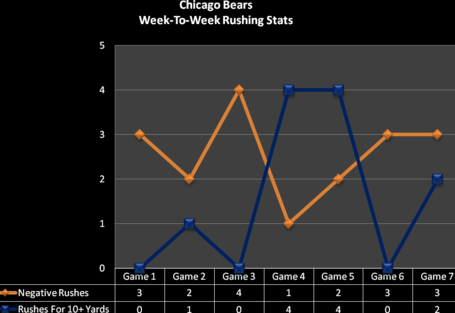 ***Note: Rushing stats are for rushes to the right side of the line only. [Click to embiggen]

All of the caveats about small sample size are in full effect here, but this is probably the best information we can go on. Looking at the visual breakdowns of week-to-week performance, it is very difficult to find empirical evidence to support Tice’s claim about Carimi being the best lineman on the Bears. In the first two games of the season, the only ones Carimi has played in so far, the Bears line gave up season highs in sacks and QB hits, while also producing five times as many negative rushing plays as it did 10+ yard runs on runs to the right side of the line.

The rushing stats for run to the right side of the line seem pretty clear cut, but the pass protection stats could still have little to do with Carimi. For more analysis on each sack this season, make sure to check out this series at SB Nation’s Bears blog, Windy City Gridiron. However, common sense tells me that the Bears took extra efforts to help Carimi in his first six quarters of NFL action. Whether leaving a running back to chip the defensive end, or down-blocking with tight end on the usual strong side of the formation, there were likely times where the extra help was allocated to Carimi despite the need for such help elsewhere on the line.

The real conundrum in these stats comes with regard to the timing of the peak rushing performances on the right side of the line. In games four and five, Lance Louis played RG and Frank Omiyale played RT. Although Omiyale is clearly one of the worst RTs in the league when it comes to pass protection and pre-snap discipline, the combination of Omiyale and Louis produced some amazing running stats on the right side of the line.

Then again, maybe Lance Louis has been the key. In addition to the rushing success he had while plugged in at RG, the line has also protected Cutler much better during the recent two weeks Louis has started at RT. While the peak rushing stats are nice to have, the focus for the Bears going forward should be to choose the line that maximizes the quality of pass protection for Jay Cutler. If Cutler can get comfortable in the pocket and go through his progressions with proper footwork, the Bears might just have a chance to turn into a real NFL offense. No disrespect to Matt Forte, but this is a passing league, and the Bears need to protect their most important player before they try to optimize the running lanes for their most productive player.

All the tangible signs point to Lance Louis being the best choice at RT, healthy Gabe Carimi or not. When evaluating the swings in performance level for the line, it is important to note that nothing has really changed on the left side of the line during the course of the season, while the right side has seen massive change due to injury and poor play. The pass protection was a mess and the running game was stagnant with Carimi as the starting RT, but there have been improvements in both areas over the recent weeks.

Make what you will out of the stats presented above, but I am advocating for the Bears to stick with the current iteration of the offensive line irrespective of Carimi’s health. Even if I could get past the typical problems associated with rookie inexperience, there just isn’t any tangible evidence to suggest that Carimi is the best fit for the short-term. If the goal is to win now and maximize their chances for his season, I feel the Bears should let the current line stay in place.

But hey, I guess in the end it’s really only a feeling, right?