Bears Vs. Lions Tickets: Prices Have Leveled Off After Spike

Bears-Lions is the most expensive ticket in the NFL this week, according to SB Nation ticketing partner TiqIQ.

Share All sharing options for: Bears Vs. Lions Tickets: Prices Have Leveled Off After Spike

The NFL's most expensive ticket this week belongs to the Chicago Bears, who are hosting the Detroit Lions in a NFC North battle on Sunday night that could have major playoff implications. The average price for a ticket hit its peak on Thursday when they were going for nearly $470, according to SB Nation ticketing partner TiqIQ. That came after a two-day surge which saw prices jump 12 percent.

Since then, though, prices have dipped and leveled off. The average price has gone down about 10 percent and now sits at around $430 with a get-in price of $251 for tickets in the 400 level of Soldier Field. (By tickets here.)

It's not hard to see what makes this game such a hot ticket. The two teams are a combined 11-5, including 7-1 against division foes. The Bears, in fact, have not lost since falling to the Lions in a Monday Night Football game on Oct. 10. They've now won three straight.

The Lions hit a bit of a rough patch after that win, losing two straight, but have since righted the ship with a dominating win over the Denver Broncos on Oct. 30. 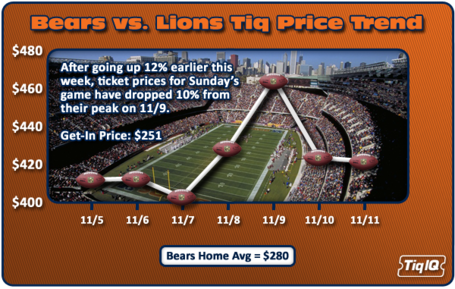