You may remember that we gave the @NotJayCutler Twitter account the official SB Nation Chicago co-sign a couple weeks back in a "Leftovers" column. Today, @NotJay reached the big time. After nearly 1,300 tweets and amassing over 25,000 followers, our boy finally earned the ear of someone close to the real Bears quarterback: his former fiance, Kristin Cavallari.

Cavallari wrote at @NotJay "I know, give me some room to breathe", around 2 p.m., though she didn't respond to anything in particular. Looking at @NotJay's feed, our best guess was that it was in response to "In case you're wondering, yes I Tebow after sex".

Just to make it clear for the history books: it was in the 1 p.m. hour that Jay Cutler, the real one, first tweeted at @NotJay. It is, to my knowledge, the first time Jay has ever recognized @NotJay. Y'all want the screencaps? 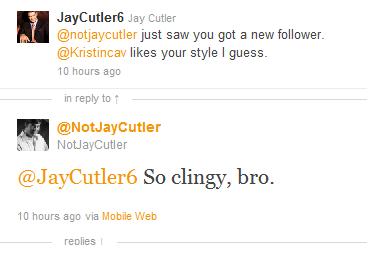 Perhaps most hilarious of all was the role played by Caleb Hanie, the man who backs up Cutler on the Bears' depth chart. No. 12 didn't like @NotJay's second best tweet of the day (behind this one):

My favorite thing to do on bye weeks is Hanie's sister. 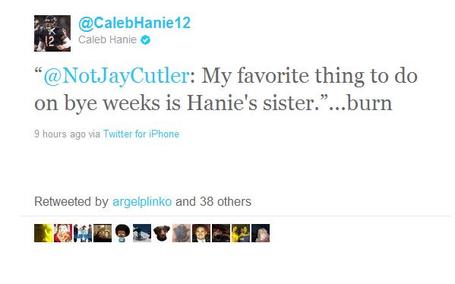 On the comeback scale of 1 to Wilmer Valderrama in the short-lived MTV series  "Yo Mama", "...burn" rates as a solid 1.5. Step your joke game up, Caleb.