When I was a young boy, my cousins lived across the street from us. The two oldest boys were named Ken and Skip, and although they were still in high school, I thought them impossibly mature and worldly. When they went to the hoop, playing basketball in the driveway, they'd do double duty as the announcer for the game, calling out the name of the player who they imagined themselves as taking the shot, "Jabar!" Or  "Bob Love!"  They had facial hair and rock band posters in their bedroom.

And comic books. Stacks and piles of comic books, in their own separate closet. And they were nice enough to allow me access to that vast library of Superman, Batman, Captain America and X-Men stories. I spent hours in there, lost in that world of superheroes.

I still love the artwork and the story lines. And even though they're sometimes called 'graphic novels' now, and even though they've gained mainstream acceptance over the years, their hard-core fans are still known as 'Comic Book Geeks.' But before you brand us all bookish dweebs and come after our lunch money, know this:

Lance Briggs is one of us.

That's right, the Chicago Bears All-Star linebacker and  all around tough guy, is a comic book fan. He even has his own comics fanpage, Lance's Comic World. It's a tribute site, with featured artists, comic news and social networking. At the bottom, it  has Lance's origin story. That's what we call our bios, 'origin stories,' it sounds cooler.

But Lance is by no means just sitting around by himself, reading comics. Nope. On this coming Saturday and Monday (having a previous engagement Sunday) will be hosting two separate comics-themed events, for his charity Briggs4Kids. You can read all about both events here. 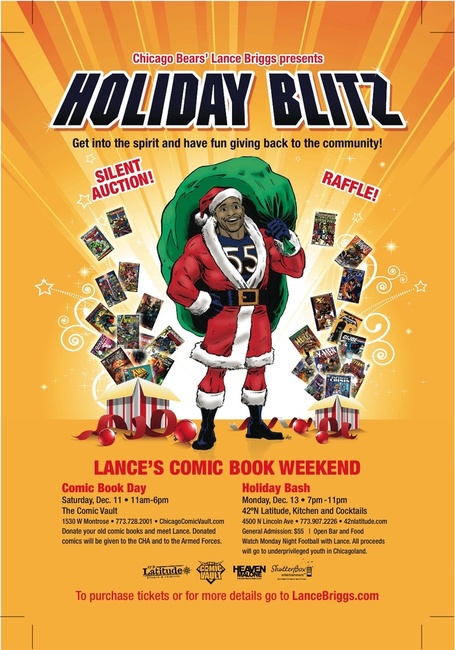 Briggs is also being featured on the cover of a comic book called 'Darkness,' which you can see here.